Sumner Stingray basketball returned from the break to sweep all three games on its schedule, rebounding from a stretch going into the holiday break where the team lost two of three games. The squad started the week with a decisive 64-19 home win vs. the Middleton Tigers on Tues., Jan. 10. It followed up that win with a tight 45-42 win over South Shore rival Spoto. The ’Rays closed the week with a 72-62 road win over Bloomingdale on Friday, the 13th, avoiding any nightmares. Sumner will play before this edition is read by most, hosting Brandon on Tues., Jan. 17, and traveling to Strawberry Crest on Wed. The Stingrays are focusing on keeping their momentum and preparing for the playoffs. 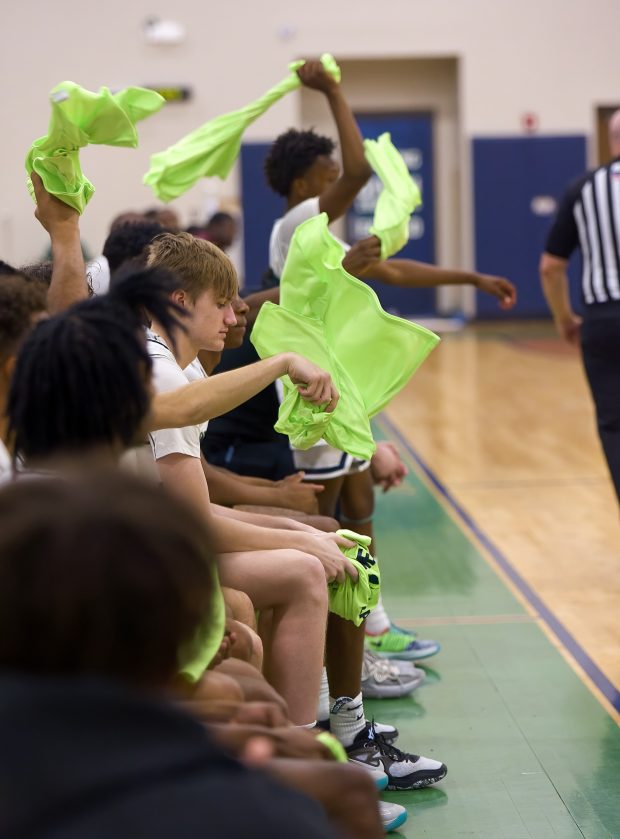 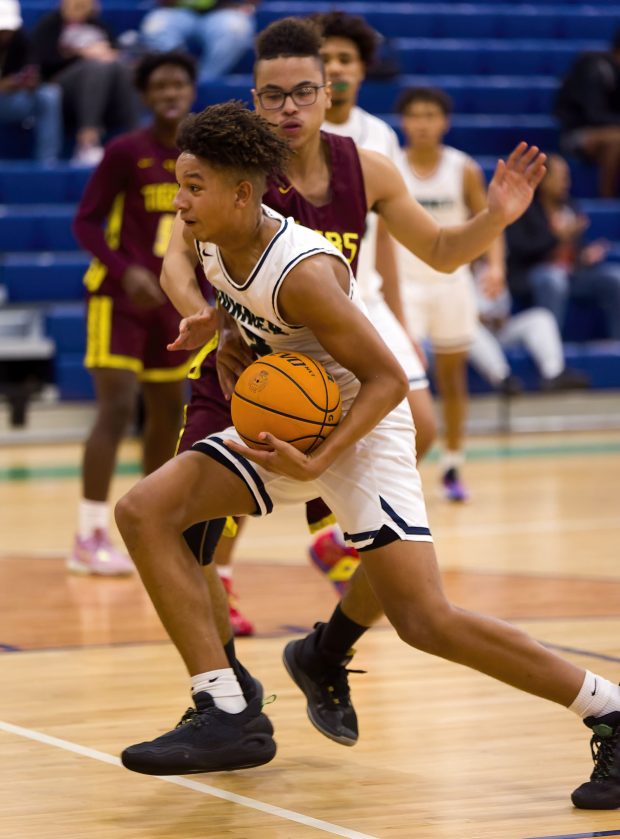 Sumner sophomore Caleb Williams makes his move to the hoop. 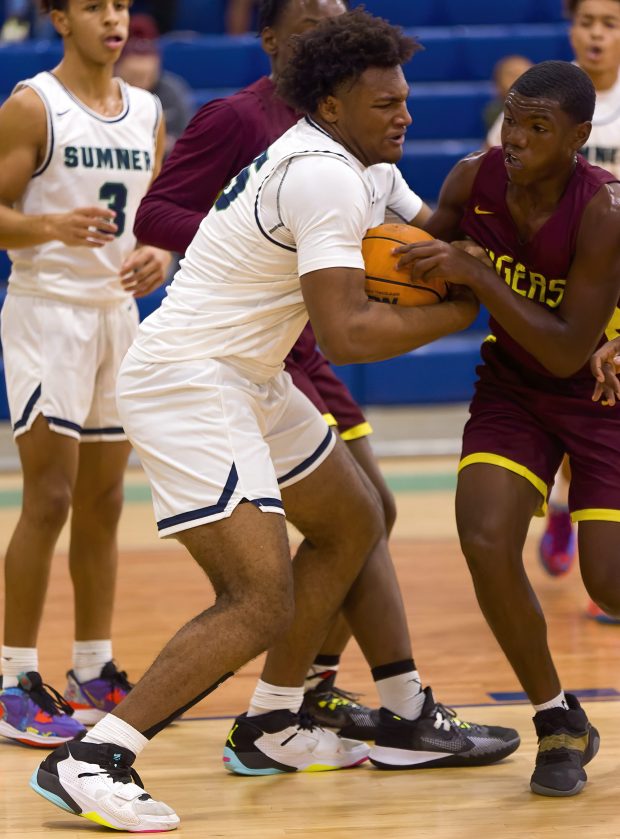 Stingray #25 ties up a Middleton Tiger to gain possession. 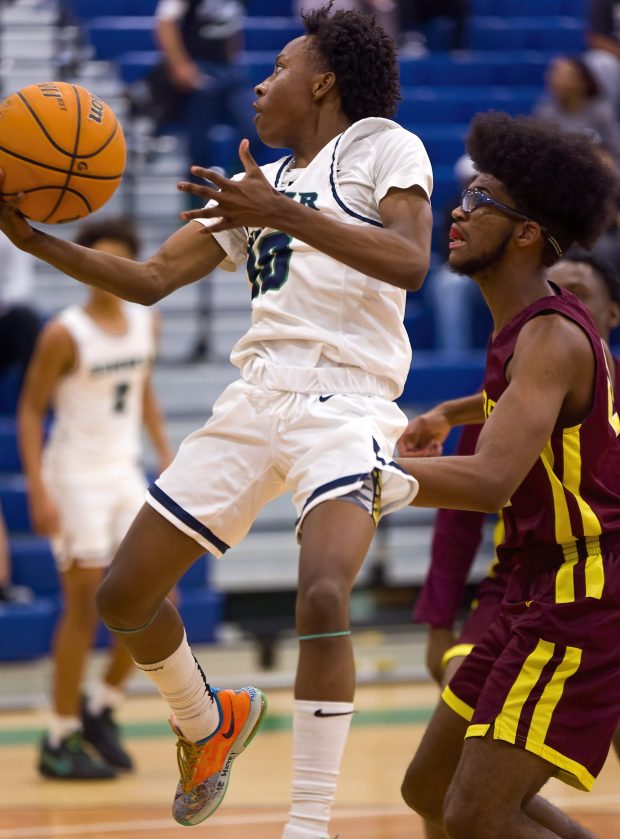 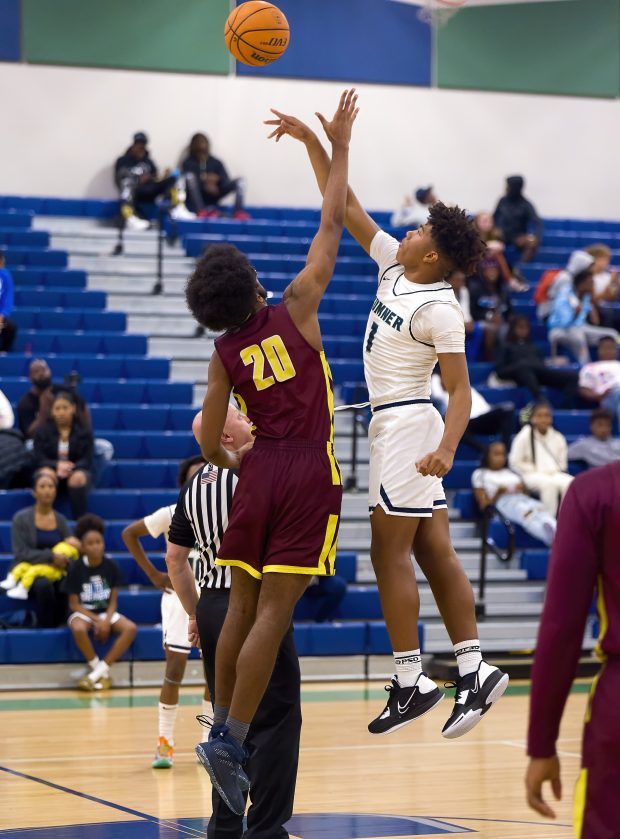 The Stingrays started the week strong, holding a Middleton team that is in the midst of a nine-game losing streak to 19 points. Sumner did not allow a Tiger point until late in the first quarter and finished the quarter up 22-5. The Stingrays continued to play a tenacious defense, coupled with a high-powered offense, to take quick advantage of a weaker opponent. Head coach Jamie Turner’s team has done a great job taking care of business and winning the games where it is clearly the favorite. Sumner added another 18 points in the second quarter and led 40-12 at the half. Middleton’s only points in the second half came on two buckets, one a 3-pointer, and two free throws. The Stingrays were paced by a 21-point effort from sophomore Caleb Williams. Sophomores Tyler Williams and Jacob Douglas added 10 each for the victors. Douglas brings end-to-end energy from a 5 ft. 6 in. frame. He ranges from being a pesky defender to putting his body on the line to drive the lane against his taller competitors. He is fun to watch.

Sumner hit the road for the final two games of the week. First stop, up RT. 41 to Riverview to take on the Spoto Spartans. The Spartans are having a nice season, currently a game up on .500 with eight wins against seven losses. They are an impressive 3-1 in their district games. Spoto was one of the few opponents left on the Stingray schedule with a winning record. The Spartans played the Stingrays evenly, but were the eventual losers. Last stop for the week was at the Bloomingdale Bulls. The Bulls also have a solid district record at 4-2, but are a couple of games under .500 at 7-10 for the season. Sumner stayed focused and put away the Bulls with the 10-point win, 72-62.

The Stingrays are 13-4 for the season and 2-0 in district play. Sumner should build on its momentum with the Brandon game. The Eagles are struggling through another basketball season at 1-10, and the Stingrays will have an opportunity to put away another lesser opponent. The away game vs. Strawberry Crest is a game that will test the Stingrays’ focus. While the Chargers are just under .500, this game precedes the next Stingray marquee match-up against 12-2 Lakeland, and it will be important that Sumner doesn’t get caught looking ahead. Stingray basketball is enjoying another successful season and the final six games of the season should be fun games to watch as the program looks to enter the post season with swagger.