Back in December it was business as usual at Jule F. Sumner High School in Riverview, only on this particular day students and teachers were following an exam schedule just before winter break.

Up in her classroom, Yolanda Turner, an Academy 2027 teacher for middle school students in residence at Sumner, eyed a bag of candy sitting on her desk. Determined not to let it tempt her any further, Turner took it down to the cafeteria where students were engaged in activities with the culture and climate resource teacher.

Turner stepped up when asked to select a music selection for Dance Telephone, an activity that asks students to build upon dance steps created by the students before them, as a way to boost memory recall.

Then came the slaps heard around the world — literally — and which led to Turner boarding a plane this week to tape a segment for the Jennifer Hudson Show, the Grammy award-winner’s syndicated daytime television talk show.

Back at Sumner on Dec. 22, Turner found herself in a dance-off with eighth-grader Orian Person, whose impressive moves drew applause from his peers, as he drew closer to Turner and the pivotal moment.

That’s when Person, in tap with Missy Eliot’s “Lose Control,” in the heat of the moment, “hits me on the shoulders with both of his hands,” Turner said. “And then he gets nervous, ‘Oh, my God, I just hit her,’ and he turns around to walk away. I thought, okay, if we’re going to do this, let’s do it. He looks back and I’m dancing, and that’s how it happened. It was very quick.”

But it wasn’t over, far from it.

Thanks to the moment captured on video by Assistant Principal Natalie McClain, the cafeteria dance-off battle went viral on Tik Tok, Twitter and Instagram, with millions of views, tons of comments and multiple television and print news reports propelling Turner, Person and Sumner High into the limelight.

“And then everything started building from there,” Turner said, in an interview Sunday, Jan. 15. “Today on my daughter’s Tik Tok account alone, it’s up to 6.1 million views.”

With the views come comments, and that’s where Turner gets philosophical about her chosen career as a teacher and the power of social media influence, however fleeting it might be.

“It was an eye-opener how powerful they are, how they spin a story and that becomes the narrative,” Turner said. “The story became how teachers build rapport with their students.”

Turner said that while she got a kick out of singer Missy Eliot’s four fire-emoji retweet, she also took great stock in the comments of many others talking about their experiences with education.

“There’s a lot of people who have been hurt in the past, with their educational experiences” falling short, Turner said. “They say this video gives them hope, that there are teachers who can relate to students because there’s so much more to school than sitting at a desk and reading a book and reciting vocabulary. You have to have a good relationship between the teachers and the students before any of the ‘teaching’ can happen successfully.” 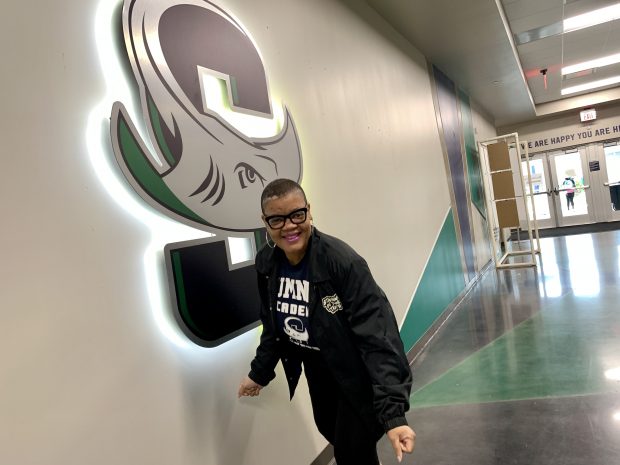 Turner takes seriously her career as a teacher and her role as an AVID College and Career Readiness teacher at Sumner High. Over the course of her 23-year career in education, she worked also at Progress Village, Orange Grove and Young middle magnet schools, Rodgers Middle School in Riverview and Steinbrenner High in Lutz.

She hails from a family of educators. Her mom worked at her grandmother’s daycare center. Her aunt, Eloise Griffin, retired from Mango Elementary School in Hillsborough County after a 48-year career as a classroom teacher.
While teaching is in her blood, both inside and outside the classroom walls, Turner said she gives high marks to the students themselves.

“Kids are resilient,” Turner said. “I tell mine that I’m so impressed with them. They’ve gone through a pandemic; they come to school every day. I am so in awe of their capabilities, and I want them to know how strong they are.”