Servings others is second nature to Joan Kramer

Kings Point resident Joan Kramer may be 83, but she’s still making a difference in the community she serves. Short in stature but large in her commitment to others, she was recently recognized on a state level for her longtime volunteer efforts on behalf of victims of human trafficking and for improving the lives of women and girls.

On Nov. 15, Kramer received the annual Florida Commission on the Status of Women Spirit of Community Award, which celebrates those who go above and beyond to serve their communities and embody the spirit of volunteerism. During the presentation, she received a plaque from the Commission and congratulatory letter from Gov. Ron DeSantis.

Kramer was nominated for the award by the Enterprising Latinas, a Wimauma-based nonprofit organization focused on women’s economic empowerment, in recognition of her role as a member of its board and for co-founding, and then leading, the Sun City Center Campaign Against Human Trafficking, now known as the Campaign Against HWuman Trafficking South Shore.

“Joan has an amazing disposition to learn and to share,” said Liz Gutierrez, executive director of the Enterprising Latinas. “Whatever is in her hands is yours. She’s very inclusive. She accepts people as they are, regardless of where they come from, what they look like or what they do.”

Born and raised in New Jersey, Kramer earned a bachelor’s degree from Simmons College in Boston and a master’s from Montclair State University in Montclair, N. J., both in family and consumer science.

Her subsequent career included working in the pharmaceutical industry, owning her own business and finally teaching in public schools for 15 years.

Early on, she began volunteering. In her college days, she served as class treasurer and volunteer editor of the campus paper.

The mother of four children led Cub and Girl Scout packs and joined the PTA of their school, which was ironically the same one she attended as a child with the same principal. As president of the organization, she started an in-school lunch program and citywide school bussing program.

“I was an activist back then,” Kramer said, smiling.

When the kids were older, she became active in the League of Women Voters.

Kramer has eight grandchildren and 12 great-grandchildren. She retired from teaching in 2000, moved to Kings Point and immediately joined the Lancaster 1 COA, serving 12 years as its treasurer. 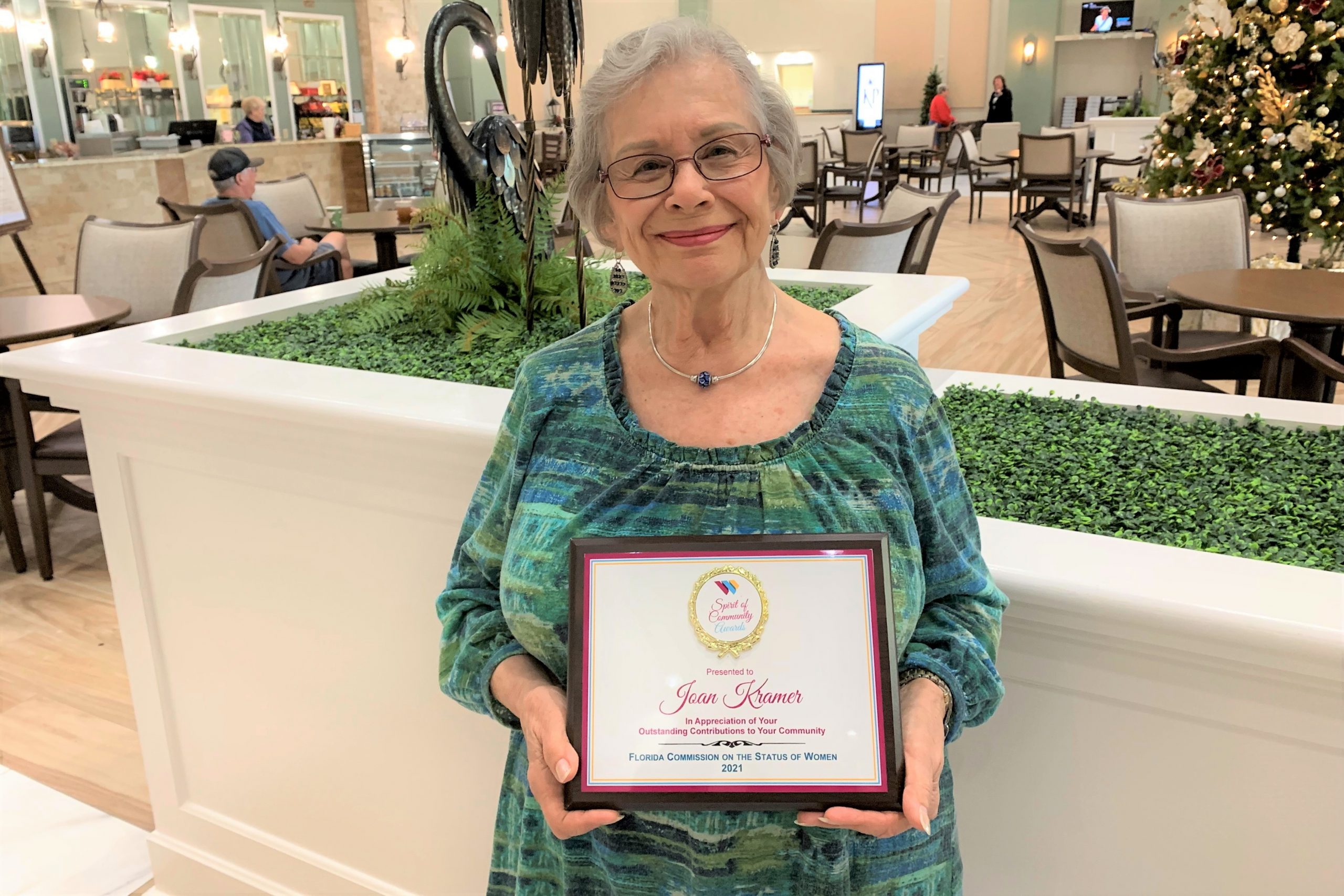 LOIS KINDLE PHOTO
Kings Point resident Joan Kramer, 83, is shown here with a state award for volunteerism she received last November. She co-founded and led what is now the Campaign against Human Trafficking South Shore and is currently an active board member of the Enterprising Latinas, a Wimauma-based nonprofit organization focused on women’s economic empowerment.

In 2011, she joined, Gail Littlefield and Sarah Hardy joined June Wallace in co-founding the Sun City Center Campaign Against Human Trafficking and served as president for four years and chaired its Victim Services Team until three years ago. Her leadership resulted in greater public awareness about human trafficking, how to recognize victims and report suspected incidents. She initiated a backpack program to supply clothing, personal care items and toiletries for hundreds of rescued victims and raised funding to cover the costs associated with the program, four residential safehouses and more.

Kramer also has volunteered at the Florida Sheriffs Youth Ranches and is a lifetime member of the National Council of Jewish Women and active member of Beth Israel, the Jewish Congregation of Sun City Center. She joined the Enterprising Latinas board in 2019 and leads its health and wellness educational workshops for women.

As far as Kramer’s concerned, she will always volunteer.

“It makes me feel good to serve others and make people happy,” she said. “I get a thrill from seeing others accomplish things. I’m blessed to be healthy, have a roof over my head and food to eat. I want to see others have the same advantages.”