New and expanded fire stations much needed in Hillsborough County

The need in fast-growing Apollo Beach for an updated station was more than evident, with the previous location, at 626 Gulf and Sea Blvd., “kind of buried down in this neighborhood with a lot of speed bumps,” said Rob Herrin, a former firefighter and HCFR public information officer. “It took a long time for our fire engine to get out to U.S. Highway 41.”
With its new location, at 6720 North U.S. Highway 41, “we can get into all of Apollo Beach, and into Waterset and Mira Bay, faster, and to the intersection off Big Bend Road as needed.”

According to fire officials, the introduction of “new and expanded fire stations” in Apollo Beach and Brandon, “has already made a positive impact on residents in the two fast-growing communities.” 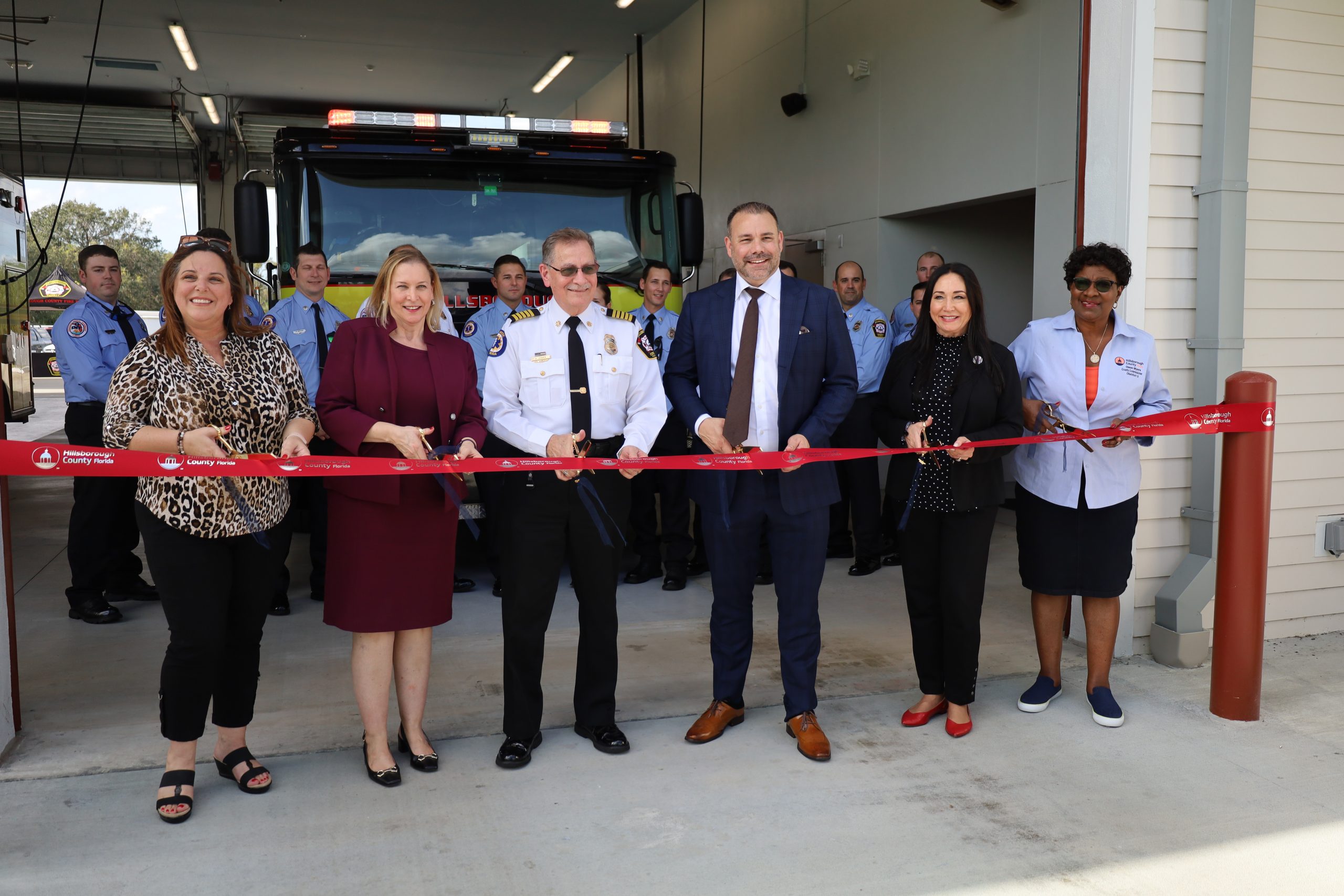 Both Station 29 and Station 45 in Brandon had ribbon-cuttings this month. The Brandon station already is among the busiest, as the Apollo Beach station is “poised to respond by land and sea.”

Herrin said both locations include first- of their-kind fire safety features, including a decontamination area for firefighters.
“After a structure fire, carcinogenic byproducts of combustion get on their clothes and skin,” Herrin said. “Now they can wash that off right in the bay before they come into the station. It’s a pretty big health initiative, putting a private shower in the bay before entering the living quarters.”

Every new station built in Hillsborough County is slated to have that feature, Herrin said.

Moreover, Herrin said, the new stations lead the way for each person having their own isolated sleeping quarters and unique alarm calling. “Versus before, if you were on an engine or on an ambulance, you’d hear the same alarms,” Herrin said. “Over the course of a 25- or 30-year career, that sleep deprivation is detrimental to long-term health.”

With HCFR for 17 years, Herrin worked at Station 11 in Brandon and Station 20 in Town ‘n Country, “so I know the value of all this stuff we’re talking about.”

This supplements Fire Boat No. 29, which is moored at Circle’s Restaurant, which firefighters can access via truck “to rescue people out in the bay, put out boat fires, and dispense 3,500 gallons of water per minute” as necessary, Herrin said.
As for the overall need in Hillsborough County for fire stations, it is an ongoing concern, Herrin said.

“Our fire chief has really pushed for more fire stations,” Herrin said. According to HCFR and third-party consultants, “they all agree that we’re about 24 stations behind, and these two new stations bring us down to 22, based on the needs of the community and the population,” Herrin said.

While Apollo Beach is a replacement station, Station 45 in Brandon is new, as is the upcoming Station 46, under construction for an opening later this year.

“We took the spot where the Hillsborough County water department used to be,” Herrin said. “It’s on the southeast corner of Rhodine and U.S. Highway 301. That’s going to be a big station.”

Also a deep need is a new station in Sun City Center, which will become Station 47, Herrin said. It’s set to be located “north of 28 and Sun City because the volume and demand down there is pretty significant as well,” Herrin said. “We’ll serve those citizens better when we have that station open.”

According to Herrin, it takes two to three years from ground-breaking to ribbon-cutting to open a new station. 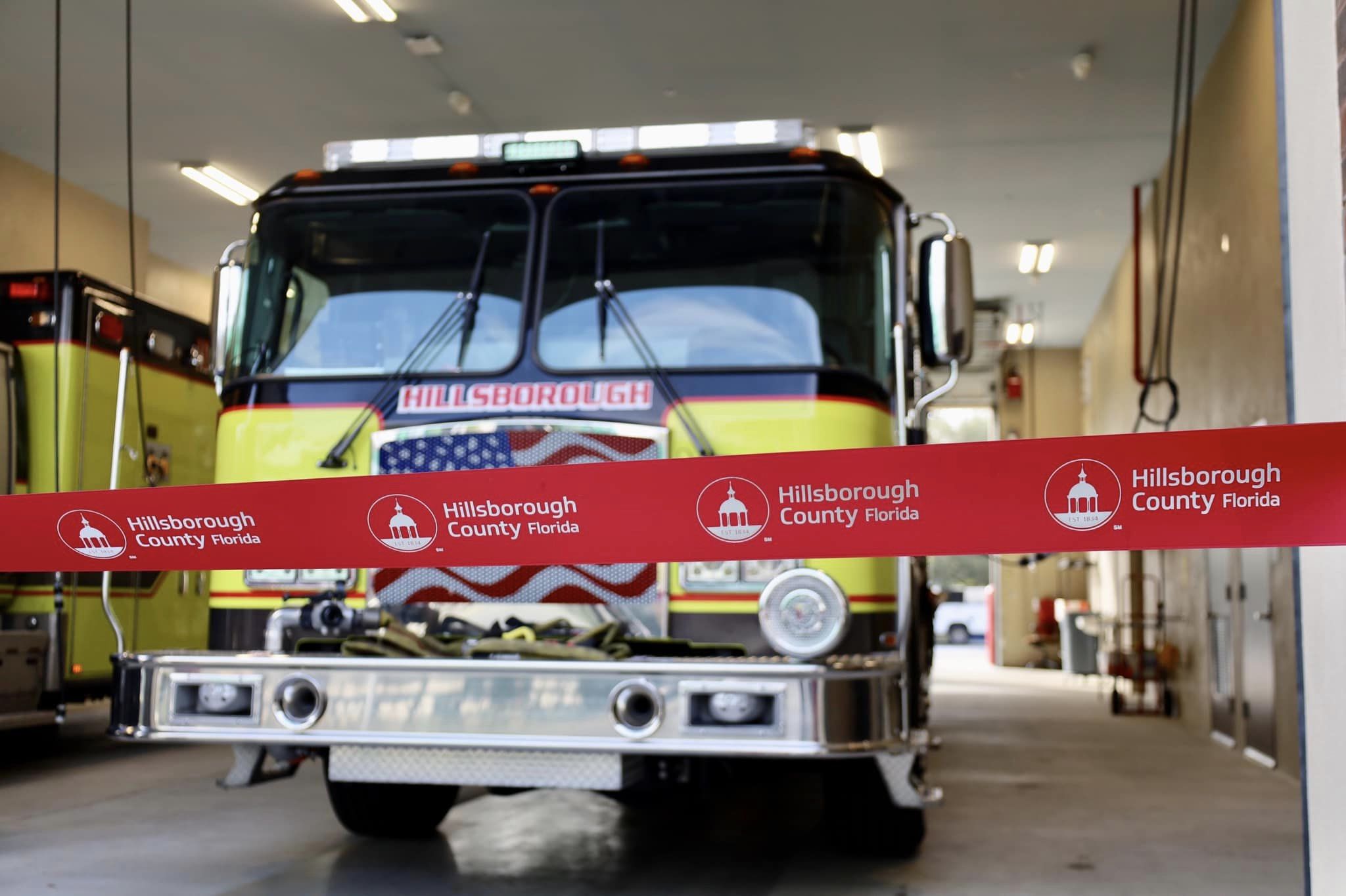 As for meeting the needs of residents and businesses, “we look for an eight-minute response time,” Herrin said, noting that less than eight minutes is even more optimal. “Eight minutes means that’s the time dispatch picks up the phone, with one minute to process and push the button, and we have one minute to get to the trucks,” Herrin said. “Now, we’re two minutes in and we need to get from our station to your location in five to six minutes, which is why it’s important to have these new stations.”

Eight minutes is key, Herrin said, because a house on fire longer than eight to 10 minutes is harder to contain. Within eight minutes, the odds are more optimal for a positive outcome for people suffering cardiac arrest.

“That is really the basis for the master plan Fire Chief Dennis Jones has proposed, and has been proposing for a while now,” Herrin said, “to try to get that response time down so we can get to your property and your loved one to provide that necessary medical care and contain that fire.”

FAs for the citizen’s role, that is key as well, Herrin said. “Don’t wait to call 911,” he said. “If something’s on fire, or someone [is stricken], don’t wait, because minute matter and you’re a part of the response time too.”