The Spoto Spartans overcame adversity to post their sixth win of the season last Thursday 58-49.
Led by Head Coach Waymon Reed, Spoto came into the “must win” match with Freedom High of Tampa on a three-game losing streak. The main reason for the Spartans’ bad luck on the hardwood floor was due, for the most part, because Coach Reed’s top player was missing in action for the fourth straight game. The Spartans had to make do once again without 6 ft. 5 in. Chris Charite, averaging 16.3 points per game. To make matters worse, Spoto’s second leading scorer, senior Jayden Johnson went down hard to the floor in the second quarter. Johnson was forced out of the game with a bad back. Johnson’s hustle and leadership from the point guard as well as his scoring average of 13.8 per game were now on the bench, unavailable for the rest of a tight game with fellow senior Charite, undergoing concussion protocol after striking his head on the hardwood a few weeks ago. Charite and Johnson are expected to be back in action Jan. 10 when the Spartans pickup after the holidays at Brandon.

Spoto missed both players as Freedom jumped out to an early lead in the game. However, Spoto did not lose its third leading scorer and leading rebounder, 6 ft. 4 in. Jose Deleon. Actually, Deleon started out on fire, and, except for brief periods on the bench due to foul trouble, Deleon had a spectacular game throwing down 30 points and grabbing numerous rebounds offensively and defensively to spark Spoto to the victory over the scrappy but undermanned and well-coached Patriots who slipped to 2-9 on the season.

The first quarter was low scoring due to both teams trying to figure out what the opposing team was doing offensively and defensively. Though the score was low, one thing remained the same; one team, Spoto, was very successful from the charity stripe hitting free throws, and Freedom was not. Deleon was also on fire for the Spartans as he picked up 9 points and 4 rebounds on a variety of shots from the paint and a couple of crowd-pleasing dunks in the opening stanza.

Quarter two was more of the same with both teams struggling to score. Johnson, one of Spoto’s leading scorers, went down after taking a spill. Now without its two top scorers, the pressure was all on Spoto to find a way to beat a 2-8 hard-fighting Freedom team. Spoto scored 12 points in the second quarter with 8 of them coming from the dynamic Deleon, once more inside at the rim for dunks and layups or at the free throw line. 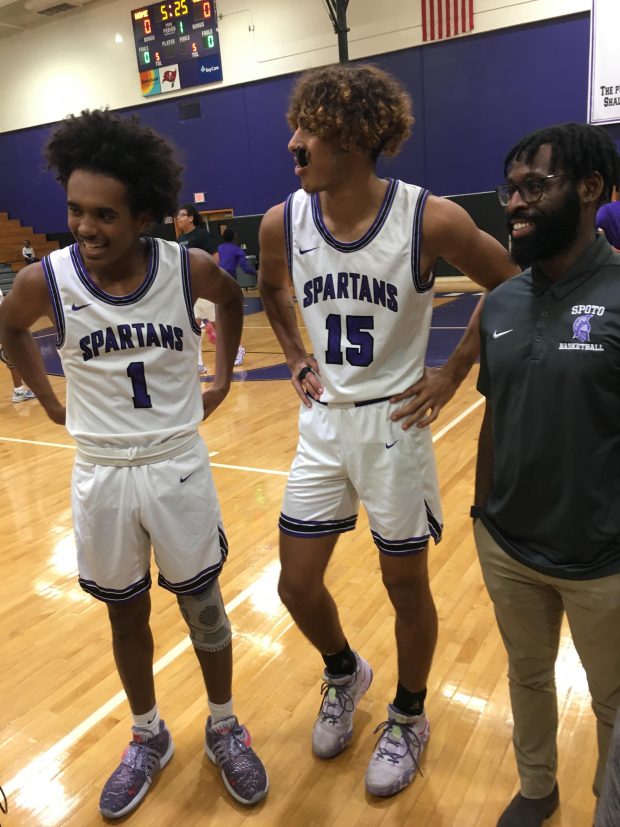 In the second half, the game flow started to pick up on Spoto’s end with full-court defensive pressure and intensity to match. Spoto junior guard Lorenz Jefferson came off the bench and gave the Spartans a spark with steals, layups and poise offensively. Deleon continued his dominate performance at the rim and on the boards, adding in another 6 points to bring his total to 23 points through three quarters. However, Deleon for most of the third quarter sat with four fouls.

The final quarter was mostly a free throw shooting contest with Freedom, as well as Spoto, now missing its. On the night the Spartans missed 18 free throws but still ended up with the win due to the third quarter spark of 18 points that essentially sealed the game. Jose Deleon returned and finished with 30 points and 8 rebounds before fouling out of the game. Spoto’s Deacon Spencer was a consistent scoring option inside and outside with 11 points and a crucial rebounder late in the game.

Also, Jefferson continued to sub well at the point guard position for Johnson whose injury kept him out of the balance of the game.

According to Coach Reed, “The final score was 58-49 Spoto Spartans over a well-coached Freedom HS team of Coach Ken Angel. Spoto needed this win to keep its regular season record and district hopes alive for the second half of the season.”
Spoto returns to action Jan. 10 at Brandon at 8 p.m. The Spartans face tough Sumner at Spoto Jan. 11 at 8 p.m. and then a re-match with Brandon on Friday, Jan. 13, at 6:30 p.m. at Spoto.