Jeanne Bessette, 83, of Sun City Center, Fla., passed away on Nov. 26, 2022, while under hospice care at the Palm Garden Nursing Facility. She was the beloved wife of Richard Bessette, who passed away on Aug. 11, 2022. Together, they shared 64 years of marriage.
Jeanne was born in New Bedford, Mass., on March 28, 1939, the daughter of the late John and Ernestine Desrosiers. Jeanne married Richard in October 1958, and together they raised four sons while living in Fairhaven. Jeanne worked at the LeRoy Wood Elementary School for 20 years before retiring. She and her husband enjoyed many years of traveling, sight-seeing and winters in Florida. They enjoyed Florida so much that they moved to Sun City Center in the mid-1990’s.
Survivors include her children, Paul Bessette, and his wife Teresa of Austin, Texas; Marc Bessette, and his wife Lynn of St. Johns, Fla.; David Bessette, and his wife Reyna of Sahuarita, Ariz.; and Michael Bessette, and his wife Michele of Gold River, Calif. Also surviving are two sisters, Doris Wolfe, and her husband Roger of Texas and Muriel Bruneau, of Pennsylvania; sister-in-law, Theresa Desrosiers, of Massachusetts; and five grandsons.
A Funeral Mass will be celebrated on Thursday, Jan. 19, 2023, at 10:30 a.m. at Prince of Peace Catholic Church in Sun City Center and will be livestreamed at www.POPCC.org/. Jeanne’s urn, possessing her mortal cremated remains, will then be entombed in a columbarium niche along side her husband’s at Sarasota National Cemetery.
In lieu of flowers, the family asks that donations be made to The American Cancer Society at https://www.cancer.org/. 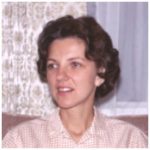 Nevis Bradicich, born in Chicago on Oct. 28, 1932, passed away on Dec. 5, 2022, surrounded by close friends and family at Manatee Memorial Hospital in Bradenton, Fla.
Nevis was born to Steve and Pauline Bradicich and raised on the south side of Chicago. After growing up in Chicago, Nevis moved to Florida with her parents where she spent much of her time volunteering at local hospitals and working at the Straz Center for the Performing Arts. There she met wonderful friends, who described her as a warm and radiant friend with an infectious laugh.
After years of working, she retired in Sun City Center, and since Nevis viewed age as just a number, she would drive to the Walt Disney Parks to ride It’s a Small World for the 100th time and later stroll Epcot’s food and arts festivals, being the “big kid” her family and friends loved. When she wasn’t visiting Mickey Mouse, she was surrounded by close friends and family, watching Purdue football games, playing mahjong with friends and laughing about silly stories with relatives.
Although Nevis was referred to in many ways: a daughter, a sister, an auntie and a friend, all who loved her dearly will never forget her tenacity, wit and sense of humor.
Nevis is survived by her brother and wife, John and June Bradicich; her nephew, Mark Bradicich; her niece and husband, Julie and Jeff O’Connor; plus two great nieces, Taylor and Tara O’Connor.
A private family “Celebration of Life” will be held. In lieu of flowers, the family asks memorial donations be made to the Sun City Center Emergency Squad or to the Straz Center for the Performing Arts.

Kurt Paul Winkelman, 72, of Apollo Beach, Fla., was freed of pain and welcomed into eternal life on Dec. 14, 2022, by a multitude of saints and angels. He is survived by the love of his life, Lorraine (Lori) (nee Covello), from whom he was taken much too soon. He was the loving father of Tina (Paul) Koch, Joseph (Allaina) and Candace (Mark) Genrich; brother of James (Carla) and Susan (Peter) Gorr; proud grandpa of Chelsea, John Paul, Ethan, Abigail, Emily, Zachary, Ryan and Ashley. He is further survived by nieces, nephews, other relatives and a multitude of friends.
Born in Milwaukee, Wis., Kurt and his loving wife Lori moved to Apollo Beach following the passing of his parents and mother-in-law, whom he took care of for years. He was preceded in death by his parents, Ernest and Patricia (Wirth) Winkelman, and mother-in-law, Ida Covello.
Kurt attended Marquette High School and Marquette University where he joined the Pershing Rifles, which was very important to him. Go Warriors!
Kurt was an administrator in his family-owned long term care facility in the Milwaukee area. He was a life-long Green Bay Packers fan who, even in the bad years, would always say, “Wait ‘til next year.” Kurt was a firm believer in giving back to others for the blessings he had. He volunteered for many years at Waukesha Catholic Memorial High School, coaching both the varsity women’s fast-pitch softball team and the freshmen football team, even having a perfect season.
Kurt was a former member of St. Francis Borgia Parish, Cedarburg, Wis., and then a member of St. Anne Catholic Church in Ruskin, where he was proud to be a Knight in the Knights of Columbus Council 7210 and St. Joachim Assembly 3881.
He served on the Knights Board in several positions and enjoyed volunteering at numerous events benefiting multiple charitable causes. The Knights promote solid Catholic teaching and stress the importance of the family, which is the foundation of society.
Kurt was a member of the Milwaukee Donauschwaben and participated in many events, such as German Fest, Holiday Folk Fair and Father’s Day, celebrating his German heritage.
A Mass of Christian Burial will take place on Dec. 29, 2022, at 11 a.m., preceded by a visitation from 10 to 11 a.m. at St. Anne Catholic Church,106 11th Ave. NE, Ruskin, FL 33570. In lieu of flowers, memorials are suggested to St. Anne Catholic Church Mortgage Fund, or Knights of Columbus Council 7210 in Kurt’s memory. Arrangements by Zipperer’s Funeral Home.

Ramona Sanchez Zarate, passed Dec. 15, 2022 at her home at the age of 87. She was born in Michoacan, Mexico. Ramona lived a long, beautiful life, leaving a tremendous legacy behind.
In 1968, she came to the United States seeking a better life for her family. She ultimately settled down in Wimauma, Fla., where she began her legacy of welcoming and helping many immigrants. Our mother’s ingenuity allowed her to feed anyone in need with nothing more than a bag of flour and beans. Ramona was a faithful Catholic to the Virgin Mary and Jesus Christ. She was greatly involved in the community and helped raise money to build Our Lady of Guadalupe Mission Church. She dedicated her life to passing down her Catholic traditions to her family and anyone she met.
She suffered a stoke in 2015 leaving her paralyzed on her right side and not being able to speak, which caused her dementia. However, when your name is Ramona Sanchez, no stroke or dementia will slow you down!
We will always remember her by her million dollar smile. She is survived by her husband, Jose Maria Sanchez; nine children; 14 grandchildren; and seven great-grandchildren.

The patriarch of our family, Richard (Dick) C. Tyrrell, passed away on Dec. 9, 2022. He brought dignity to a disease (Parkinson’s) that tries to take yours away. He had this disease for over 15 years and never complained once. We will greatly miss his humor, kindness, toughness and warmth.
He was the son of Al and Marjorie Tyrrell and grew up in Woodbridge, N.J. He leaves behind brother Ken Tyrrell and sister Jeanne Tyrrell. He was a loving, supportive and proud brother to Ken and Jeanne. He leaves behind his wife, partner and best friend of 58 years, Gail (Kille) Tyrrell. They met at Bucknell University and spent much of their family years in Cherry Hill, N.J., and Morristown, N.J., then Hilton Head, S.C., and Sun City Center, Fla.
They had children, Rick Tyrrell and Kristi Tyrrell, and cherished their time with them and, eventually, their families. He loved his grandchildren, Jack and Scott Tyrrell, from Rick and Laurel Tyrrell and Lauren and Addison Gray, from Kristi Tyrrell and Guy Gray.
Dick was a very accomplished football player at Bucknell University and had a successful working career as an executive with the RCA Corporation and the Sony Corporation. He also was actively involved in barbershop singing groups in Cherry Hill, N.J.; Hilton Head, S.C.; and Sun City Center, Fla. He treasured his family most and he and Gail made every effort to be at big events for all of the grandchildren. He and Gail were also fortunate to make great friends across all of the eras.
Dick had a natural way to make people feel welcome and was never short on jokes. He cast a very big shadow, but it was always a warm shadow. He will be deeply missed but not forgotten.
A Celebration of Life event will be held at Club Renaissance in Sun City Center, Fla., on February 4, 2023, from 2 to 5 p.m.
In lieu of flowers the family asks you to consider a donation to either The Sun City Emergency Squad that was so helpful over the years or the Michael J. Fox Parkinson’s Foundation to help make progress against this challenging disease. Here are the links:
• https://sccems.com/support-us/.
• The Michael J. Fox Foundation/.

Beatrice Lunn Despres, a former resident of Sun City Center Fla. and Windham, N.H., passed away on Monday, Dec. 5, 2022, at Suncoast Hospice in Palm Harbor, Fla. Beatrice was born in North Andover, Mass., to the late Harold and Anna Lunn, on Nov. 30, 1926. Beatrice was raised and educated in Lawrence and Methuen, and worked for many years at Western Electric.
She was a volunteer at Searles Castle in Windham and at the Prince of Peace Church in Sun City Center.
The widow of George R Despres Sr., Beatrice is survived by her children, Beverly Ledoux (Andre), of Tampa, Fla.; William Despres, of Riverside, Calif; Christine Middlemiss (Laurence ), of Palm Harbor, Fla.; George Despres Jr. ( Doreen), of Wilton N.H.; nine grandchildren; 11 great-grandchildren; and two great-great-grandchildren.
A celebration of life will be held at a later date with a spring burial in Windham, N.H.