South Shore boys basketball underwent a huge change at the top last week. With the season still early, another change is due following the Friday, Dec. 16, clash between the new top two challengers for the mythical number one in the South Shore. The current 4-1 Sumner Stingrays host their challenger, the 3-3 Riverview Sharks at 6:30 p.m. in the Sumner gym with the winner laying claim to best in the South Shore—at least for now.
The Spoto Spartans had the top ranking among the five South Shore teams, but the Spartans had a rough week. Spartans Coach Waymon Reed’s squad lost all three games last week to slip to a 4-4 worksheet. After a neighborhood battle Dec. 13 at Riverview High, Spoto takes on King High in Tampa Dec. 14. And then, on Friday, Dec. 16, at 6:30 p.m., the Spartans travel again, this time to play Bloomingdale. The Spartans are led in scoring by senior sharpshooter Chris Charite with 16.3 points per game. Senior Jayden Johnson has poured in 13.8 ppg and junior Jose Deleon has been good for 8.5 ppg and is tops in team rebounding along with senior Jeremyah Gentle at six per game. Tenth grader Johnaven Reed has the most Spartan steals at 1.5 per game. The next home game is Friday, Dec. 23, when Freedom High visits for a 6:30 p.m. clash. In its eight games, Spoto has tallied 412 points and given up 438.
The Riverview Sharks of first-year Head Coach Anthoine Corpening were drubbed in the first game last week, losing 82-54 in Plant City. The Sharks bounced back to nip Middleton. Then on Friday evening, Riverview whipped Bloomingdale 62-47 to push the Sharks season point total to 355 while yielding 396. Riverview’s seniors Sebastian Fowler scored 16 and Dezmond Santiago added 11 points. In the Middleton win, Fowler finished with 22 points and 10 rebounds for a double double. Sharks junior Bryson Kerney netted 15 points. Riverview extended its lead to 17 in the fourth quarter prior to Middleton’s making it a little closer with multiple back-to-back 3-pointers. The Sharks increased their defensive intensity at Bloomingdale to dominate the Bulls. Fowler once again topped Sharks scorers with 25 points, and senior Dion Girdner chipped in 11 points. Riverview coaches liberally subbed toward the end.
The Lennard Longhorns salvaged the Friday game 69-50 over Brandon last week after dropping games to Sumner and Tampa Bay Tech. Horns Coach Christopher Putnam’s squad is at early-week 2-4 with 359 points scored and 385 given up on the season. Pacing all Lennard scorers is Nigel Roseboro. The junior had a sensational career night in an early December loss to Spoto with 32 points, eight rebounds, four steals and two assists. Lennard, now 2-4, visits rival East Bay High Dec. 12. The next evening, the Horns come back to Ruskin to confront 5-0 Durant. The schedule shows no games until a Dec. 23 trip to play Tampa Bay Tech. Then Lennard is off until resuming Jan. 10 at Manatee High in Bradenton. 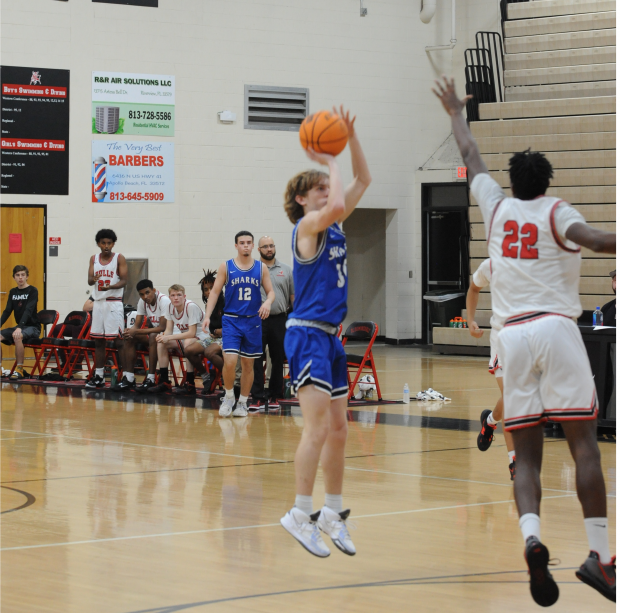 East Bay High Coach Marcus Ludwig’s Indians are taking their lumps in the early going. EB is 0-6 after three more losses last week. The Indians fell Friday to powerhouse Durant, 77-38. Previous defeats in the week were competitive but a lack of offense cost games to Armwood and Brandon. The Indians have tallied only 227 points, and opponents have put up 359 in EB’s six losses. Finally back on the hardwood after a stellar defensive football campaign for the 10-2 football Indians, Chris Stewart, a six foot guard, has been the Indians top scorer with 10, 18 and 10 in last week’s games.
Coach Ludwig sees signs of improvement. “Our players basketball IQ is improving,” says the new coach, citing experience, or lack of, as one of the top factors. EB this week hosts Lennard on Monday. Bloomingdale comes calling Tuesday. The Indians then take a Christmas and New Year break until Armwood visits Jan. 10.
As for basketball outside the five South Shore squads, the Bell River Academy in Riverview pushed its unbeaten record to 8-0 by beating Parrish High 56-46 and SLAM High of Tampa 72-63 last week. The Panthers of Coach Garrett Ruppel have scored 632 points and only allowed 297 all season. BCA plays Dec. 14 at home against DeBartolo Collegiate High of Tampa and on Dec. 28 versus Leto High in a to-be-announced tourney site. Then on Jan. 10 BCA hosts Brandon Academy at 6:30 p.m. followed on Jan. 13 versus Carrollwood Day High at 7 p.m. in Riverview.