Back for a second year is Tampa Bay’s Festival of Lights and Santa’s Village, at the Hillsborough County Fairgrounds in Dover, where record- breaking numbers were reported last month for the annual Hillsborough County Fair.
“Believe it or not, we filled it all up,” said fair manager Suzanne Holcomb, of the newly opened, $1.2 million, open-air livestock building that debuted at this year’s 11-day fair, which ended Nov. 13. “We had larger youth livestock shows, and we definitely needed the space.” 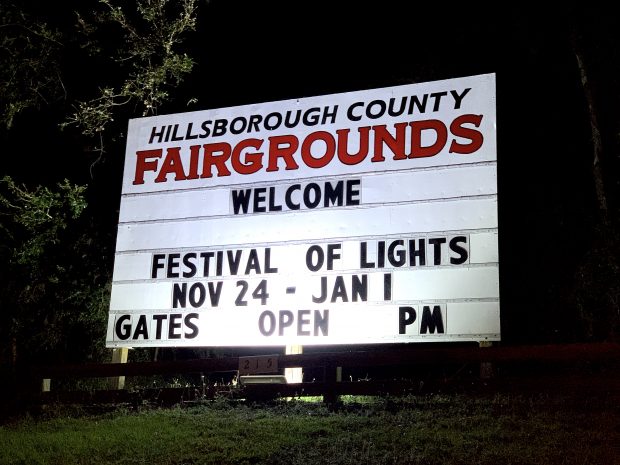 Further showcasing the ever-growing fairgrounds in Dover is the seasonal draw of Tampa Bay’s Festival of Lights and Santa’s Village, which kicked off Thanksgiving Day and is set to finish its five-week run New Year’s Day.
“We present this festival because it’s a community event and we want to partake in the festive spirit,” said Hillsborough County Fair Manager Suzanne Holcomb. “Honestly, it allows us also to make some additional money, which helps us to support our youth and put more investment back into the fair.”
Festival features this year include for the first time a “phantom carnival,” Holcomb said, including rides with seasonal themes, including Santa’s train, the reindeer carousel and a holiday roller coaster and Ferris wheel.
A major draw is the 2-mile drive-through Festival of Lights, featuring high-tech LED displays amounting to more than one million lights, Holcomb said. New this year in Santa’s Village is an 80-foot walk toward a 30-foot lit Christmas tree in the village center. New nostalgic displays are in place as well in the section of the fairgrounds known as Hometown Hillsborough, where self-guided tours and S’mores fire pits are in view as well. 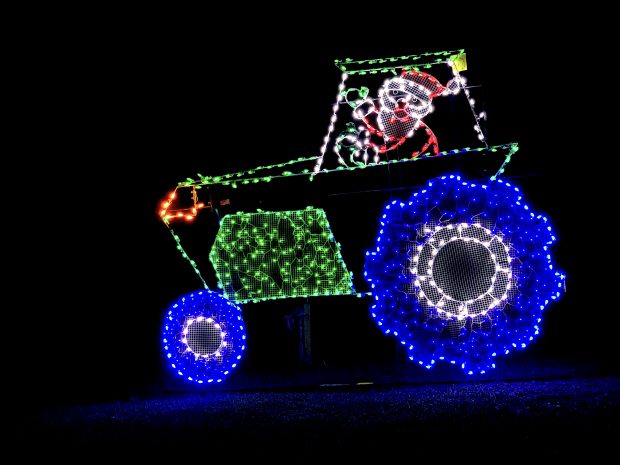 Photos by Linda Chion Kenney
Seasonal themes and Florida living scenes are depicted in more than one million lights at Tampa Bay’s Festival of Lights and Santa’s Village in Hillsborough County.

Village highlights include Santa Claus himself, along with food vendors, crafts stations, camel rides and Santa’s Barnyard petting zoo.
“We’ve provided this event for six or seven years now, and this year and last year we produced the production ourselves,” Holcomb said. “It’s a lot of work to turn around in nine days [following the fair], but everyone’s in the holiday spirit and it’s really nice to see it come together.”
Recognizing there’s no shortage of holiday affairs throughout the county, Holcomb said the festival is one more effort to draw the community together.
“Given that a lot of people don’t put up lights anymore, and that our event is five weeks long, it gives the community an opportunity to come out and look at Christmas lights,” Holcomb said. “We encourage friends, neighbors and families to come together to see the lights for themselves.”
In additional to the expected seasonal and Christmas themes, there are light displays that reflect some of the major draws of Florida living and tourism, including manatees, golfing, beaches and palm trees.
The cost per carload (up to eight people) is $25 to view the Festival of Lights Thursday through Sunday and $20 Monday, Tuesday and Wednesday. Gates open at 6 p.m. weekdays and weekends, with gates closing at 9 p.m. Sunday through Thursday and 10 p.m. Friday and Saturday.
Live entertainment Friday and Saturday nights is on tap as well, including Dennis Lee and his band, set to return Dec. 16 and 17, and Katie Lombardo, on tap for Dec. 9 and 10. Other live entertainment is scheduled as well, with a full rundown of event details and offerings available online at www.HillsboroughCountyFair.com/.
According to Holcomb, additional costs inside Santa’s Village include those for face painting ($10), camel rides ($15), tractor-pull hayrides ($3), individual tickets per carnival ride (under $5), and crafts stations, including $1 each to make reindeer candy canes and for making “reindeer food.” 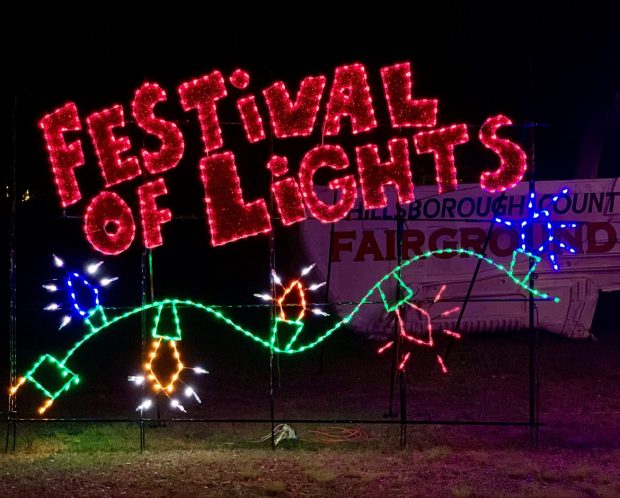 As for capturing the moment for prosperity, photos with Santa are priced at $5 and $10, for digital and printed, respectively, Holcomb said. Backdrops for selfies are scattered throughout the village, including one that features a candy cane theme.
For sure, the Hillsborough County Fair Board of Directors is super busy the last two months of the year, starting with the November kickoff of the Hillsborough County Fair, which in 2023 is set to run Nov. 2 to 12.
This year’s fair debuted the newly constructed 18,000- square-foot livestock building, which is set for another $1.2 million expansion, also in state grant funding. The structure sits next to an older 13,000- square-foot open-air space and the 7,000- square-foot expedition building.
The newly remodeled fairgrounds campus houses a large variety of indoor and outdoor event spaces available for rent, providing a setting for such things as cultural receptions, business events, family gatherings, fundraisers, trade shows, car shows, award ceremonies and arena events, including rodeos and tractor pulls.
“Every weekend now and until July is booked with some sort of event at the fairgrounds,” Holcomb said. “As our fairgrounds continue to grow, it helps the community, and our buildings are here year-round for non-fair events, including livestock shows and agricultural exhibits.”
Visit www.HillsboroughCountyFair.com for rental and event information. The Hillsborough County Fairgrounds is in Dover at 215 Sydney Washer Road. Call: 813-737-FAIR.

Tickets on sale now for Breakfast in Santa’s Village