The Riverview Sharks high school boys basketball opened its season with something new—an attitude.
Oh, that new attitude is brought on by the Sharks hiring of a new head coach, Anthoine Corpening. Coach Corpening brings what he knows to the classroom, or in this case, to the gym. Corpening knows basketball. He has played and observed the sport first hand all over the world. Corpening also knows what provided this global view—21 years in the military, specifically the US Air Force. Corpening graduated from public school in Hinesville, Ga., where he played basketball. Then it was on to the Air Force, where he continued to develop his prowess as a shooting guard/defensive whiz in the military and on semi-pro teams in the US and internationally.
Corpening has been called on to replace longtime Riverview basketball coach Milton Clifton. After a long and outstanding, and, sometimes, bumpy 15-year tenure as basketball coach at Riverview, Clifton finally decided to call it a career. It did not help that Clifton saw his overall record at Riverview reach below .500 depths the last two seasons. After a stellar 19-6 worksheet in 2019-20, the Sharks fell to 4-11 in a covid-shortened 20-21 campaign. It got worse in 2021-22 when the Sharks slipped to a 2-17 record.
Coach Corpening was brought in to take over for ex-coach Clifton. Corpening actually came to Riverview last season as Clifton’s heir apparent, serving as JV coach and went 10-6 with a squad of all freshmen at Riverview.
Coach Corpening brought his experience, and passion, from basketball and also brought his experience from a multi-year position with the Air Force. The largest part of that experience is the lifestyle and military culture Corpening acquired and practiced as a tremendous part of his resume. Corpening is now relying on several military veterans in the Tampa Bay area for his coaching assistant roles at Riverview. These “veterans” of the military life are now working as mentors and coaches with the Riverview athletes interested in developing a Sharks basketball squad with a new attitude—a military attitude. The military vets have deep roots in service, team building and hard work, maintains Coach Corpening. Several served, deployed and played basketball, says Corpening. “Now they are here in the Tampa Bay area. These four tremendous guys are Donald Campbell, George Hines, Stanton Simmons and Ryan Vaught.
“The military has just given us so many additional skill sets that we were not able to gain during college or while working on a degree and things like that,” observes Corpening. “A military lifestyle taught us those life skills that, I believe, translate directly into coaching.” 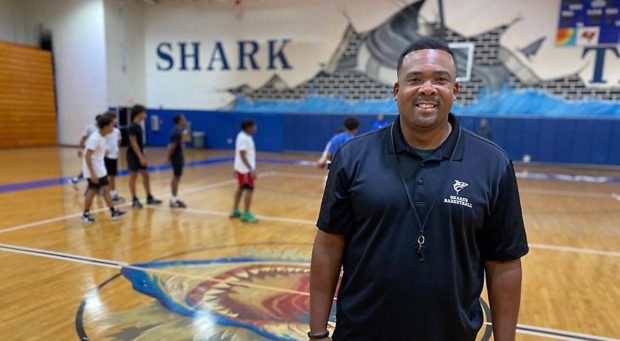 The game may be over when the final buzzer sounds or when practice ends, but for Corpening, the discovery, the mentoring and the maximizing of the potential of each player does not end on the basketball court. Beyond the basics of the game, Coach Corpening has assembled a staff that contributes beyond dribbling, shooting, zone and man-to-man defenses.
“ No matter what it is, “ adds the Sharks new coach, “we pretty much have the capacity to help these young men mature.
“We are going to teach them how to play basketball, how to win games, but, most importantly, we are going to be able to pour [our knowledge and skills] into these young men and to create model citizens…or at least to the best of our ability.”
Corpening said finding and maximizing his team’s potential doesn’t end on the basketball court.
One senior member of the Sharks’ hard-court contingent, Dion Girdner, says having a coaching staff of military veterans means a new perspective for the team players here. “All the players here work really hard. I think our team can go further with the players we have,’’ Girdner said, adding he expects the assistant and head coach to bring out everyone’s potential.
That potential will be revealed to the public in a rival game at Lennard on Nov. 29. Then the Sharks have two games at home on Boyette Road. Robinson High of Tampa visits Nov. 30. The Newsome Wolves are in Riverview for a Friday evening, Dec. 2, tipoff. Three straight road games follow these: Plant City, Dec. 6; Middleton, Dec. 7; Bloomingdale, Dec. 9. The Sharks return home to tangle with Spoto on Dec. 13.