Active in the rural Balm area and beyond, Bruce and Susan Harrell of Riverview were recognized this month with one of the posthumous memorial 2022 Harvest Awards, along with Al Berry, a familiar Florida Strawberry Festival icon; Vernon Blackadar, a gifted Lithia woodworker; and businessman Perry Buttram.
In addition to the four posthumous recognitions, 2022 Harvest Awards were presented Nov. 3 to Helen Parke, for Lifetime Achievement in Agriculture; Michelle Williamson, for Outstanding Woman in Agriculture; Joshua Griffin, for Outstanding Young Farmer; and Sammy and Jeff Busciglio, for Farm Family of the Year. The Saint Vincent DePaul Faith and Grace Garden was recognized as well for Outstanding Public and Community Service.
In accepting the posthumous award on behalf of his parents, James Harrell said he asked his mom one time as a youngster, “Why do we help all these kids all the time, why do we always have to do these extra things?” Her answer, he said, was that “sometimes God moves us to do a little more for people” in need. 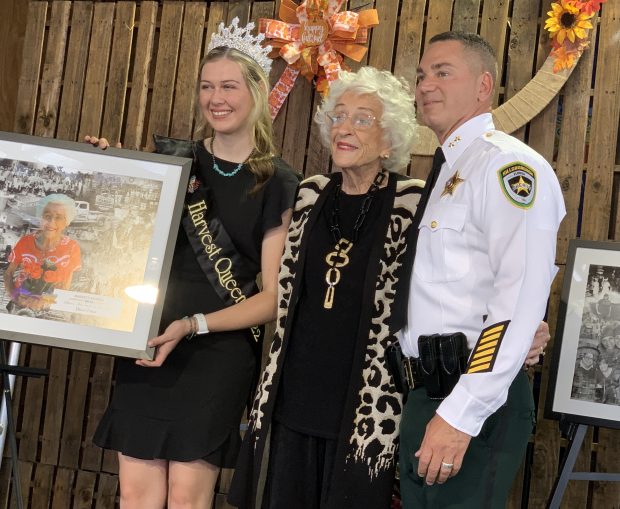 Helen Parke, with Hillsborough County Sheriff Chad Chronister by her side, accepts her 2022 Harvest Award for Lifetime Achievement.

As for the best advice his father gave him, he remembers it as follows: “Son, no matter what situation you encounter, if you leave it better than when you found it, the world will be a better place.”
In recounting additional highlights of the deceased couple’s contributions, Melissa Raburn, a master of ceremonies at the Nov. 3 ceremony, noted that Bruce and Susan Harrell were instrumental in both seeing a need for and getting the Hillsborough County Fair Market Swine show organized.
“Susan would work tirelessly even after she was diagnosed with cancer,” Raburn said. “Bruce helped as much as his hours at the [Hillsborough County] Sheriff’s Office allowed. One of his favorite positions with the sheriff’s office would come to be that of Ag deputy. That allowed him to be more actively involved in all of the fairs and festivals in our county.”
Indeed, Harrell’s son said that while his dad had a “second nature for safety and security, no matter where it was,” his most “favorite prized possession” upon retiring as a captain was the sheriff’s office’s agriculture unit.
Raburn noted as well that as a young mother, Susan Harrell started a 4-H club both for her young children and the children in the community “The children wanted to show swine,” Raburn said, “but they were too young for the FFA.”
As active participants in Balm Baptist Church, as well as the Newsome High School FFA and Newsome football team, the Harrells “absolutely loved the county fair,” Raburn said. “Their sons were also involved with the county fair and are extremely humbled that their parents were chosen for a [posthumous memorial Harvest] Award.”
Moreover, “if you knew Bruce and Susan, you would know that they would not have wanted any recognition for what they did,” Raburn said. “That’s what makes this [award] so so special for their family.” 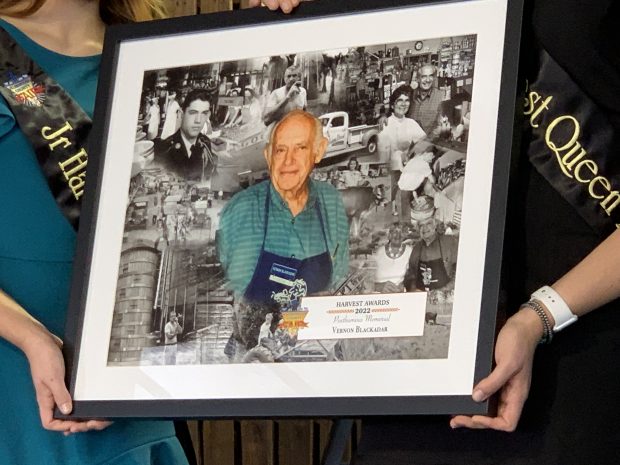 Berry, a name synonymous with ‘Mr. Berry,” was a lifelong community leader who, with his partner, Ercelle Smith, owned the Plant City WPLA Radio station. Berry served on many boards, including the Florida Strawberry Festival Board. With his daughter Karen he launched In The Field, a publication specializing in agriculture interests.
According to ceremony highlights, Blackadar, who hailed from Massachusetts, “carried on his and his family’s passion for dairy farming in Lithia.” Along with operating Maiden Hill Dairy, Blackadar was a 4-H leader devoted to teaching youngsters “the intricacies of judging, fitting and showing their dairy cattle.” He also “housed many of the 4-Her’s cattle that were milking, so that they could be cared for in the manner that dairy cattle should be cared for.”
A gifted artisan, Blackadar owned Lithia Woodworks and exhibited many winning entries at fairs throughout the area. He was known to present his handmade Grand Champion award to the winner of the dairy show, even in the last few years of his life with failing health. 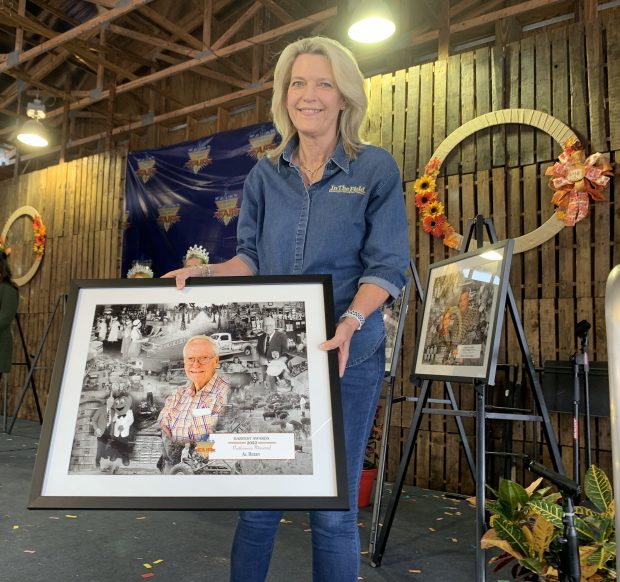 Businessman Buttram started Consolidated Land Care in 1981 “as a weekend business with two push-lawn mowers and a very strong work ethic,” according to prepared ceremony remarks. In 1989, Buttram quit his full-time job, and with his son Jai “started incorporating new ideas into the business, including pest control, termite treatment, mosquito reduction and even wildlife services.” The company today is known as Consolidated Pest Control, and Buttram is remembered for his “tremendous” support of youth in agriculture. 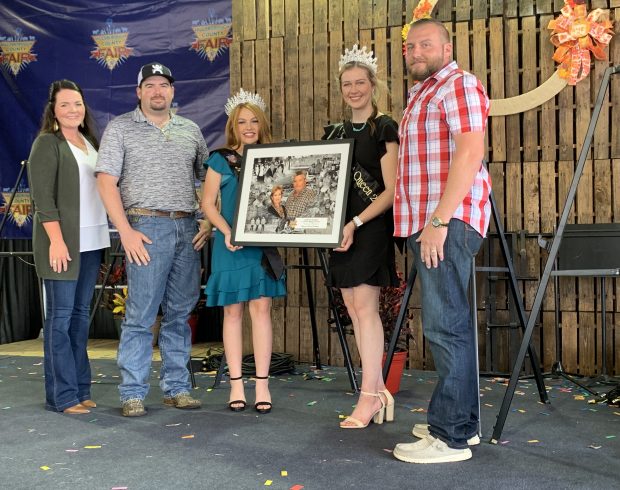 As for Parke’s lifetime achievement award, her legacy dates back to a local five-and-dime store in St. Louis, Missouri, where she met Roy E. Parke, “a third-generation farm boy from Ireland” who was on assignment with the U.S. Army, according to Hillsborough County Sheriff Chad Chronister, in presenting the award.
“Fourteen years later they moved to Florida with their four children and planted a 10-acre farm in the little town of Plant City,” Chronister said. “Roy was a visionary and knew the potential of strawberries in this little town.”
Helen Parke, Chronister added, “was right by his side to help grow his business.” She founded Parkesdale Farm Market in 1963. Five generations later, Parkesdale Market, with an international footprint as well, stands at 3202 West Baker St. in Plant City.