Among the visitors to Pebble Park in Riverview for its ribbon-cutting tour was Stacy White, who due to term limits clocked his final day as a Hillsborough County Commissioner on Nov. 21.
White, whose District 4 seat includes the greater Riverview community, stepped down from public service after four years as a school board member, followed by eight years as a county commissioner, but not before his last public affair, the ribbon-cutting for Pebble Park, a project near and dear to his heart.
There, on Nov. 17, he joined Hillsborough County representatives and those as well from The Mosaic Co., which previously had owned the land. According to Forest Turbiville, Hillsborough’s director of Conservation and Lands Management department, county officials bought the land valued at $2.8 million for roughly $2.1 million.
“This is a long-standing project that we’ve been working on [for] almost eight years,” said Greg Horwedel, deputy county administrator. “It’s a partnership between the county, Mosaic and the community. We are so pleased that all this was able to come to fruition.” 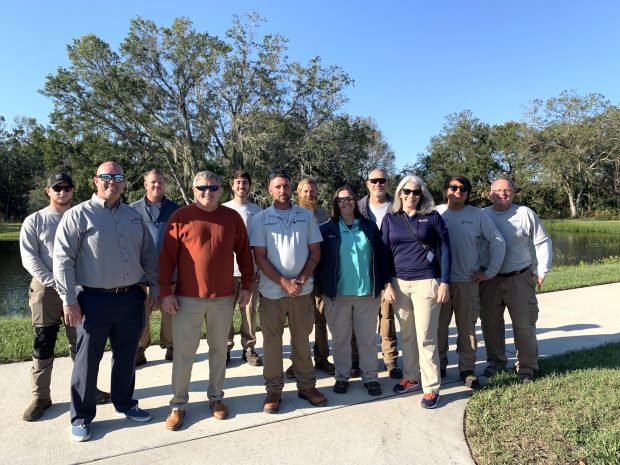 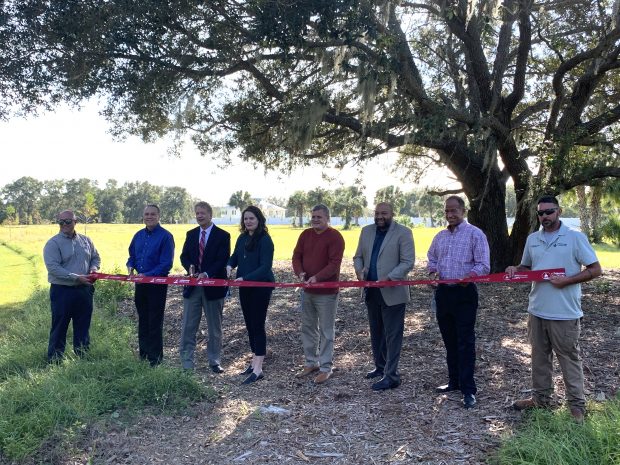 Dignitaries gather to cut the ribbon announcing the grand opening of Pebble Park in Riverview.

The 27-acre property, at 9955 Riverview Drive, features a quarter-mile paved walking trail, a half-mile natural surface hiking trail, three pavilions with picnic tables and two native-planted areas, along with a pollinator garden. Future plans for the pet-friendly park call for an Alafia River overlook.
“I was the commissioner who championed the funding for this park and worked closely with staff on the design,” White said. “I’d be remiss if I didn’t thank the Mosaic team, who contributed to this park in terms of selling this land to the county for much below market value. That’s very much an investment in this community.” 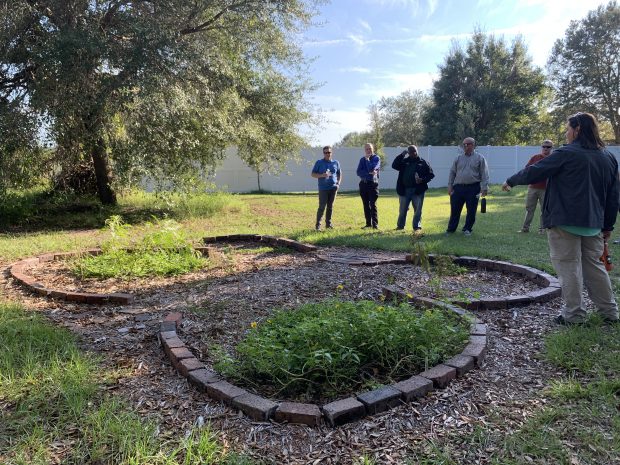 White noted as well his interest over the past couple of years in terms of using public art in traffic roundabouts and elsewhere, as is the case for the 6-foot sculpture of Benjamin Moody that sits in the roundabout entrance to Pebble Park. Moody is remembered as the founder of Riverview, as being instrumental in the founding of the Riverview United Methodist Church at Riverview Drive and U.S. Highway 301, and as a three-term county commissioner.
“My viewpoint is that I would like to use these art pieces to tell a little bit of the story about the history of our communities,” White said, not far from a small depiction of a second sculpture in development for the inside of Pebble Park, near the picnic pavilions. Crafted in collaboration with artists and craftspeople of the Seminole Tribe, the “sovereign” statute is set to honor the spirit of the historic Council Oak, featuring a series of re-envisioned patchwork story panels designed by Seminole artisans. 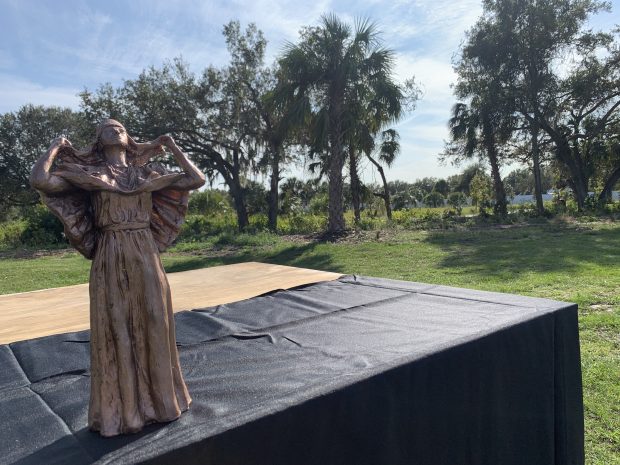 “We worked closely with the Tampa Bay History Center and with the Seminole Tribe of Florida to commission that statute,” White said. “The story we want to tell there is that when people see the Alafia River, they wonder where the name comes from. The term is of Native American origin and it means, ‘River of Fire.’ ”
White said the name comes from the river’s bioluminescence, which refers to the production and emission of light by living organisms.
Following prepared remarks, attendees walked the paved hiking trail to a grand oak tree, where the ribbon-cutting ceremony was held. Further down the trail, tour leaders discussed the stakes in the ground that signified where gophers have their burrows, which, in turn, can serve as habitats for more than 300 organisms. Indeed, the weaving nature of the paved trail reflects the intent to protect the gopher tortoise burrow ecosystem.
Other highlights included a section where the trail will be extended in the future, to give park visitors access to a boardwalk and Alafia overlook yet to be constructed. It’s expected to be completed by the end of next year. Also noted is the expansive and diverse sandhill ecosystem the paved trail surrounds, which over the years will feature a sprucing-up.
“We’ll add wiregrass, elephant foots, palmettos, longleaf pines and more, but still try to keep it open,” said Ross Dickerson, division manager for the Jan K. Platt Environmental Lands Acquisition and Protection Program (ELAPP). “And that’s what’s nice about a sandhill community. It doesn’t grow [tight] like a hardwood [tree] community. It’s wide open and scattered.”
Meanwhile, off the unpaved walking trail, visitors took a first look at the butterfly garden created by Brownie scouts working in conjunction with county officials. Used to outline the garden’s butterfly shape are bricks that were uncovered during the park’s construction. The bricks were from the original Riverview Drive, which brings yet another historical dimension to Pebble Park. 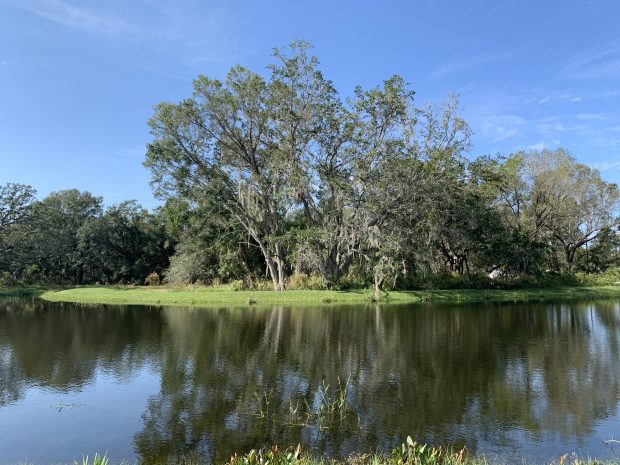 Overseeing the park’s daily operations is Travis Parker, park manager, who said a park of conserved nature “brings the community together,” and especially so in light of the growing network of neighborhoods and high-density roadways that have come to define the Riverview landscape and beyond.
During construction, Pebble Park was a “hidden gem, and now it’s discovered,” Parker said. “Come out and enjoy it. Anything I can do to make your visit better I’ll do my best. I love building relationships with the people who come out here and being a part of something bigger than myself.”
Park hours are 8 a.m. to 6 p.m. Sunday through Saturday during the fall and winter months, and until 7 p.m. during spring and summer.