East Bay High took a ferocious physical whipping in the second round of the FHSAA 3M football playoffs last Friday. The Indians fell behind early, losing 28-12 to the Largo Packers.
Two first quarter turnovers by East Bay helped the home team Packers forge ahead 7-0. Five more turnovers and a late vicious Largo hit on the ankle of Indians senior star quarterback, Nathan Carter, proved to be way too much for East Bay to overcome at the Pinellas County high school, which ran its record to 9-2 by pasting the Indians from the South Shore.
Eliminated at 10-2, East Bay went home and packed up its equipment. Largo continues playing football. This Friday at 7:30 p.m., the Packers have the task of tangling in the regional final with perennial power 8-4 Jesuit Tigers on their home field in Tampa. The winner continues in the Florida High School Athletic Association state football semi-finals Dec. 2. The state champ for this 3M division will be determined at a date determined between Dec. 15-17 at Ft. Lauderdale.
Second-year East Bay head coach Mike Gottman, 58, commented after the bruising by Largo, “The Packers are a very physical team. Largo outhit us. They made more meaningful plays than we did.”
Coach Gottman, whose Indians finished 8-3 in 2021 and bowed out of the state playoffs after a first round loss last season, is proud of his 2022 team, adding, “10-2 was a great season for us.” A look back at unofficial East Bay High gridiron history shows only two season records any better. 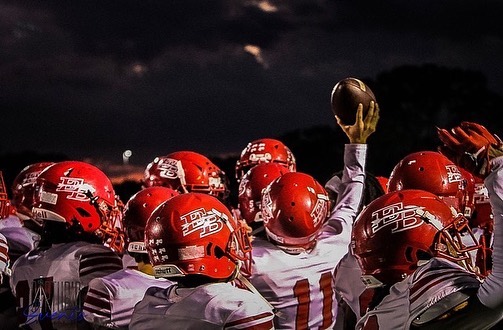 Largo hit the scoreboard first Nov. 18. The Packers defensive back, Marcus McCluster, picked off a Carter aerial deep in EB territory in the opening stanza. The blue and gold clad Packer quarterback did not waste any time. Junior Jeremy Thomas scampered to the end zone from the 9-yard line. The PAT gave Largo a 7-0 lead that it never surrendered.
East Bay hung tough behind Carter’s passing. Late in the second quarter, Indians QB Carter found senior receiver Aiden Showers for a 15-yard TD pass. The Braxton Maenza PAT attempt was blocked. The Indians would never get closer than 7-6. Largo Coach Marcus Paschal, an ex-NFL safety, told a newspaper, “We wanted East Bay to know that we play defense on this side of the bridge!”
That Coach Paschal defense continued to play havoc with East Bay’s offense in the second half. EB lost another fumble on its first drive of the second half. Once again, Largo QB Thomas was on-the-spot. He tallied another score, and the PAT made it 14-6. The Indians’ Carter hit Ronde Roseboro for a 9-yard TD pass, but Carter was injured on the play and not available for the two-point try, which failed. That left East Bay trailing 14-12 after three quarters.
In the 4th quarter, Largo blocked an EB punt. Thomas scored his third TD of the game with the field position, and Largo’s defense was still on a roll, which dominated East Bay. Largo running back Chase Green sprinted 62-yards for a late score after a Largo interception by Zayvion McCluster, which put the frosting on the winning cake for Largo, 28-12.
Indians head coach Gottman commented after the game that Carter had a bad ankle sprain but was recovering quickly even though he had to leave the game. East Bay played placekicker Maenza at quarterback, a position he played very infrequently during the season. 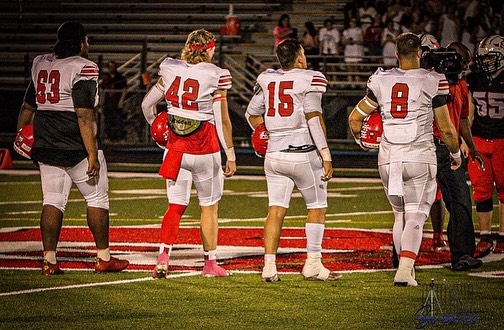 East Bay Indians Facebook photo
This team has so much to be proud of, incredible growth and strength. You have put your stamp on East Bay’s history books.

Gottman added, “We just could not muster enough offense against Largo’s defense. I never like losing, but we had a great year. East Bay High went 10-1 when I was here in 1995, and they went 10-1 in 1972. So this was our best football season in a long time.”
Coach Gottman is losing 26 seniors, including the entire offensive line and a portion of the Indians defense. “These guys will remember this year the rest of their lives,” pointed out Gottman, acknowledging that he has a giant task of rebuilding for the 2023 season.