With well over 100,000 veterans in Hillsborough County, and a substantial number of those in south county, the Sun City Center Veterans Day Ceremony at the Community Association Hall on South Pebble Beach Boulevard is always well attended. For over three decades, on the 11th day of the 11th month, the community has come together to commemorate the day in 1918 when World War I ended. (Until 1954, Veterans Day was called Armistice Day; Dwight Eisenhower changed it in 1954.) 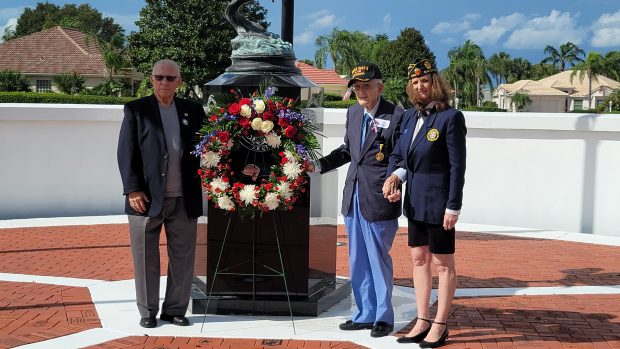 Although the 2022 Veterans Day ceremony was sponsored by the military veteran organizations of Sun City Center, American Legion Post 246 took the lead. Commander Paul Wheat, Lt. Col. (Ret.), served as master of ceremonies. In Wheat’s introduction of guests, he recognized the Daughters of the American Revolution, Col. George Mercer Brooke SCC Chapter (on hand serving refreshments) for hanging the flags along SR674 every major patriotic holiday.
Bob Black, U.S. Army Korean War veteran, speaker for the ceremony, talked about his war experience and suggested to the audience that rather than tell a veteran, “Thank you for your service,” tell them, “Thank you for what you did and where you did it.” 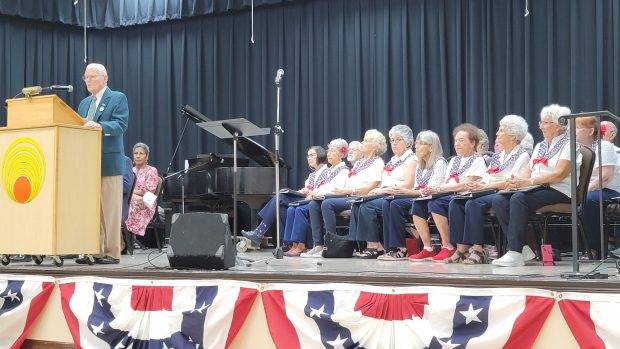 Legionnaire Janet Taylor, U.S. Navy veteran, narrated a tribute to the grand marshal of the day, WWII veteran Ken Barringer (U.S. Navy). Lily Meyers sang the National Anthem, and TAPS was played by U.S. Air Force veteran Gary Mull.
The Trinity Singers, directed by Trinity Baptist Church’s Dr. Jim Burns, were also on stage to present a veterans service tribute and patriotic songs.
A wreath placement at the SCC Veterans Memorial in front of the hall followed the ceremony.
The memorial was dedicated in January 2019. Bricks engraved with veteran names as well as individuals and organizations honoring veterans are incorporated into the foundation. This is an ongoing project, and an order form for purchasing bricks can be found at the web site of Sun City Center Charitable Foundation (charitablefoundationscc.org). For memorial information, contact Walt Cawein at 813-340-0533 or, preferably, at waltcawein@gmail.com/.