Making an impact in only his sophomore season

USF is in the midst of a tough season, winning only one game so far this season and just having fired its head coach, Jeff Scott, and elevating Daniel Da Prato (special teams) as the interim head coach. But there are bright spots at USF, and one of those is TJ Robinson, a sophomore DB, with local roots. Robinson played his high school career at Riverview HS. I had a chance to sit down with Robinson and talk about his experience so far at USF and his transition from high school to the college game. I also attended the team’s game vs SMU to see Robinson out on the field with his teammates.
I opened our conversation talking about how this is a great time, despite the on-field struggles, to be a part of the USF program as the program is in the midst of a capital improvement project that is adding a new practice facility as well as looking at building an on-campus stadium. The team currently plays at Raymond James Stadium, home of the NFL Buccaneers. Robinson agreed and is excited about the direction of the program. 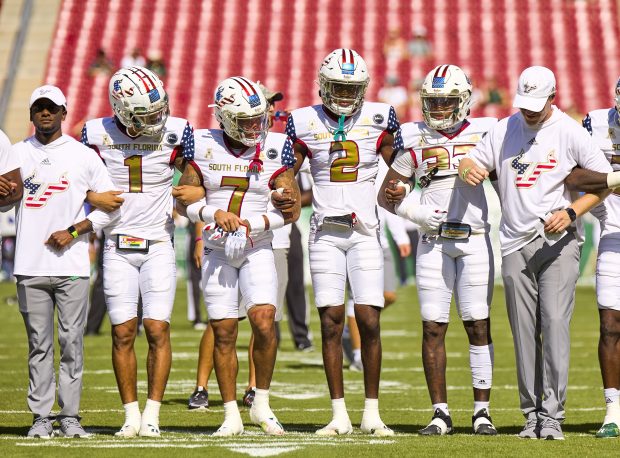 TJ connects arms with teammates and coaches before the game. 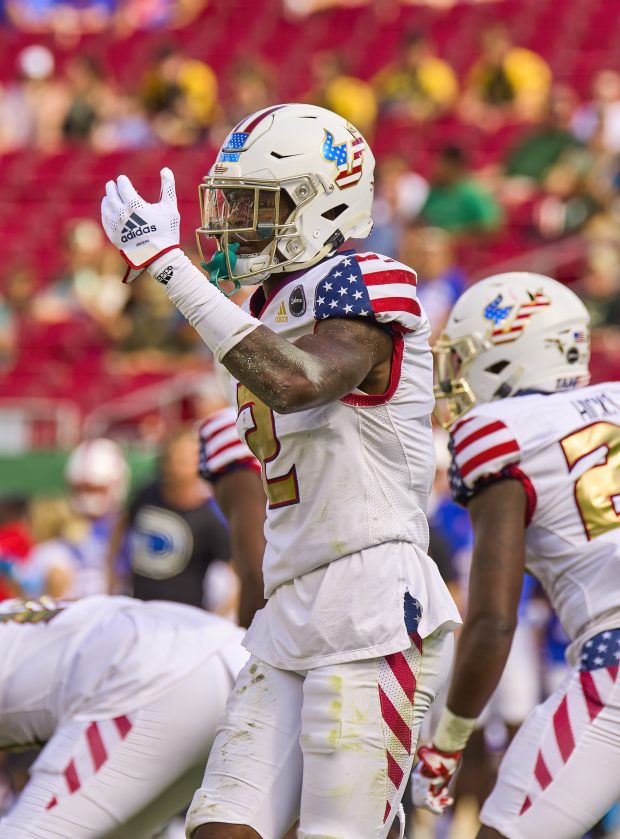 TJ directs players to match the offense in coverage. 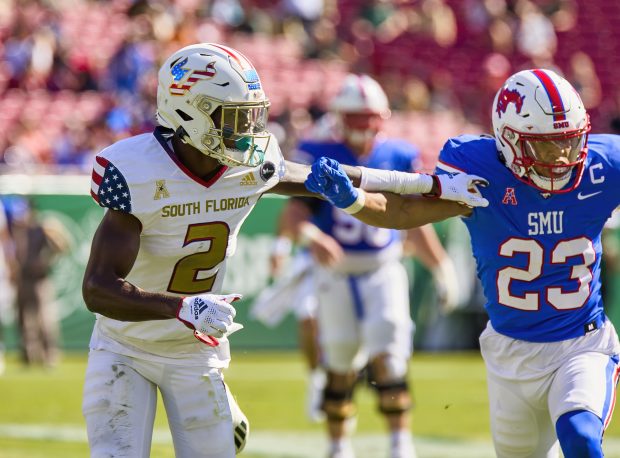 TJ contacts with an SMU receiver in a pass route.

Robinson graduated from Riverview HS in 2018 and began his college chapter at Rutgers University, playing four games for the Scarlet Knights before considering a change. I asked him about the move from Rutgers to USF, and TJ offered that he “always kept his options open and received a phone call from then USF Head Coach Scott inquiring about his interest in returning home to play for USF.” Robinson thought it over and decided that the change would be advantageous and would allow him to return home to “play in front of family and friends” and “would help him elevate his game to another level.” He sat out a season because of the NCAA transfer rules, but has been an impact player for USF at Defensive Back and had 32 tackles in his 2021 season and now has 31 in his 2022 campaign. Robinson embraces a leadership role in the USF program, taking new recruits under his wing and helping them to make the transition from the high school game to the college game. The “speed of the game is definitely faster than in high school, and the playbook is much larger than in high school,” said Robinson. In the game vs SMU, I could see Robinson’s leadership coming out on the field as he was directing players to their places from his key position at DB. SMU would win the game, but Robinson made his usual steady impact on the game by being involved in five tackles (three solo). 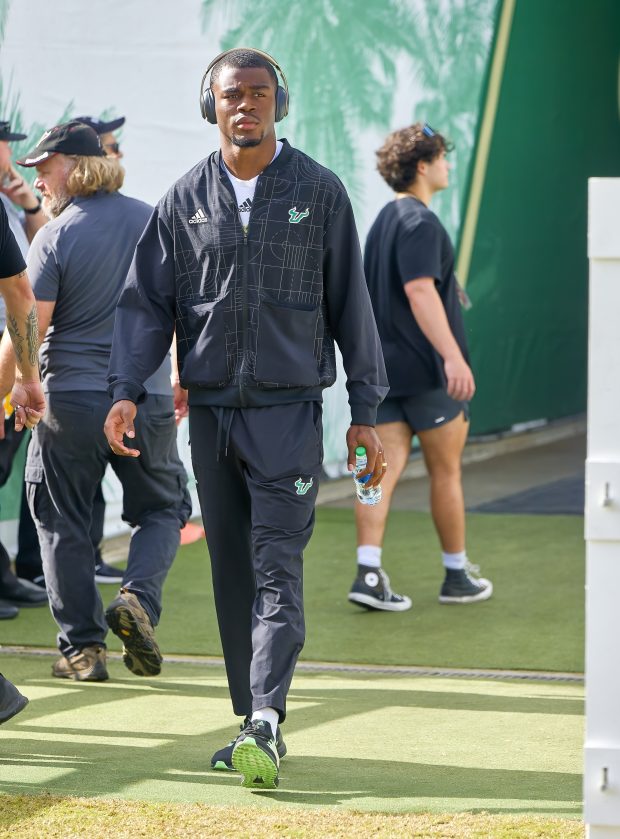 FRANCIS FEDOR PHOTOS
TJ comes out of the tunnel for a pregame walk-through.

Robinson stays in touch with a number of his teammates from his Riverview days, calling it a “brotherhood” atmosphere. He knew a number of his teammates at Riverview from before they met at the high school, having played with them in other leagues. His interest in football goes back to the age of 5 or 6 when he started playing flag football. He also still keeps in touch with former coaches, including Matt Reese (now at East Bay), David Coffey and his former head coach, William Mosel, who is now at Spoto. He quoted one of his former head coaches with a profound saying that he likes to live by: “How you do anything is how you will do everything.” He believes hard work pays off and likes to lead by example.
I could feel how important family is to Robinson. He and his wife are expecting a child soon, a girl, and I could see the pride in his eyes when I congratulated him. He is already looking forward to being a leader as a father and being the best father he can for his daughter.
Robinson will be in his junior season in 2023, and teammates like Robinson will be needed to elevate the program to a better result than they had this season, with only one win vs. Howard, and with two games left to play. They have played a couple of games that were competitive, including a game vs. the University of Florida, but have not been able to finish.
Robinson is proof positive that hard work and leadership are important traits in life, and it was a joy to talk with such a fine young man. Good luck to Robinson as he ends this season and looks to the 2023 campaign.

C.A.R.E Gift & Wine Fair to be a humdinger