Loses playoff game on the road

The promising season for the Alonzo Ashwood led Sumner Stingrays was ended by a late Plant rally, and the Stingrays fell 37-34 to the Panthers.
The Stingrays were facing a tough test in their first-round playoff game against a very similar Plant team. Both teams have quick strike capabilities. The Plant Panthers lost their first two games this season, the opener vs. Tampa Bay Tech, which has been talked about in sideline circles as maybe the best team in the area, and Berkeley Prep, which has also garnered high praise. The Stingrays also lost two games, one of those to top tier Wharton. Sumner and Plant are definitely in those conversations and have built strong programs.
The Stingrays jumped out to a quick three touchdown lead, failing on a two-point conversion on the third touchdown, seizing a 20-0 lead, the first two TD’s coming on the ground and the third an eight-yard connection between junior QB Greg Smith and sophomore wide-out Tyler Williams. There were eight scores the rest of the way, six of those were Plant scores with two touchdowns, but it would not be enough to close the deal. A sequence of two Stingray breakdowns would give Plant the momentum. The first was a kickoff return by Panther special teamer Jaquez Kindell. The second was a 20-yard fumble return for the second of three consecutive Plant scores. Sumner scored late in the fourth quarter but left enough time for battle tested Plant to connect on a 52-yard TD for the win. 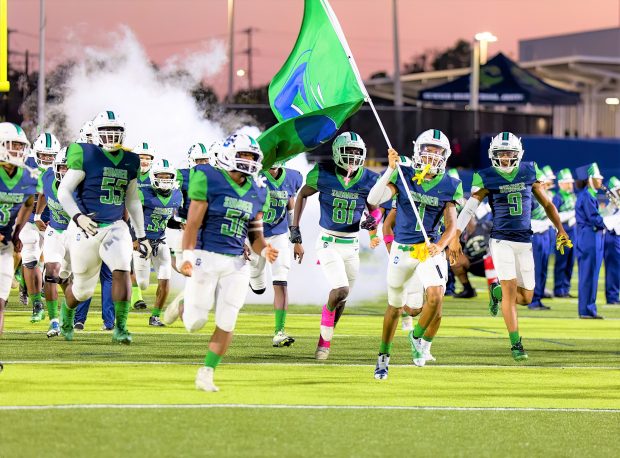 Plant’s quick strike capability was highlighted by only having 41 offensive plays but still scoring five TD’s. In contrast, the Stingrays ran 82 offensive plays for their five TD’s. Stingray QB Greg Smith completed an amazing junior year with 245 yards passing and nearly 200 yards on the ground. Sumner had an offensive total of over 500 yards, 519 to be exact, but it was not enough to get past another worthy opponent in Plant. One team has to win a game, and one team has to lose a game. That’s just the rule, at least in the playoffs, and, unfortunately, the Stingrays season ended with likely their best statistical game of the season with the incredibly dynamic performances between two players who are going to be back for next season, Greg and fellow junior Devin Spencer (RB) and Tyler Williams (WR) who was on the receiving end of two passing TD’s. This closes the 2022 chapter for the Stingrays, but the 2023 version will be in the conversation as one of the top teams in South Shore, if not county wide. Fun times are still ahead for Sumner football.