In their second gridiron season under Head Coach Mike Gottman, the East Bay Indians survived the opening round of the state playoffs last week. Now at 10-1, the Indians’ next battle is Nov. 18 on the road at Largo High. East Bay is the lone South Shore playoff survivor as Sumner High lost its opening round to Plant High.
East Bay is the oldest high school in the South Shore. Since it opened its doors, football coaches Brian Thornton and Frank LaRosa have had competitive teams. Named as head coach for 2021, Coach Gottman led the Indians to an 8-3 campaign last season. This season East Bay is hoping to take it further into the state playoff system. Playing at home in the new Metro FHSAA (Florida High School Athletic Association) section, East Bay jumped ahead early of Osceola of Seminole County. The talented foot of extra-point kicker Braxton Maenza provided the margin as the Indians hung on for the 14-12 victory over the Osceola Warriors last week. 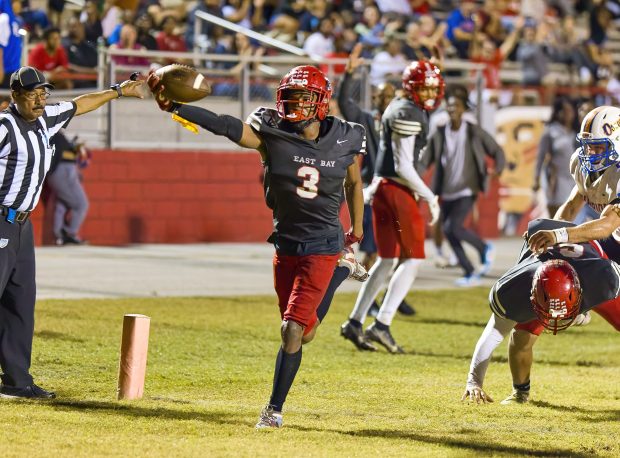 East Bay senior Vincent Ketchup races into the end-zone before the play was called back on a penalty. 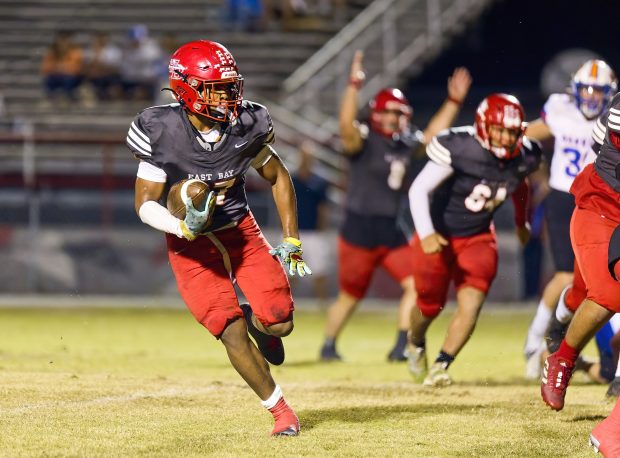 Indian junior FB Jaelin Sneed turns the corner on his way to scoring one of two East Bay TD’s as players signal TD in the background.

Coach Gottman is blessed with an all-round talented team. But it cannot be denied that three-year starter and senior quarterback, and occasional linebacker, big Nathan Carter is the leader of the 2022 Indians. The six foot three, 245 pound Carter leads with his reliable running attack, his field leadership and occasional clutch passing. Carter tallied what would be the winning touchdown on an 18-yard scamper to the end zone with three minutes remaining in the second quarter. Senior Indian Maenza calmly booted the PAT just as he had done following junior Jaelin Sneed’s two-yard foray into the end zone with 11 minutes in the second quarter. Up 14-0, that was all the scoring East Bay could create. The Indians’ lead shrank to 14-6 with a 49-yard scoring scamper by Warriors’ senior Owen Hinote with six minutes in the third quarter. The shrinkage continued with another chunk TD run by Nathan Carter of Osceola for 35 yards, to cut the margin to two points with only two minutes to play. Osceola attempted a two-point conversion, but East Bay would not let it happen. The Indians moved on with further business. Osceola went home, season complete at 7-4. 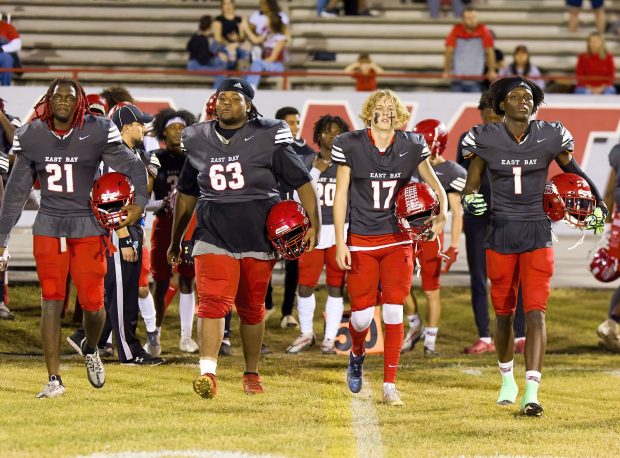 Coach Gottman is preparing his squad for an 8-2 Largo team. In October, this Largo Packers team lost 17-14 to Osceola. Largo is about a 35 mile drive to the west in Pinellas County. The Packers nickname is derived from its historical role as an ex-national provider of fruit.
Largo won in its opening playoff round 22-0 over the 5-6 Northeast High Vikings of St. Petersburg. The Largo Packers depend primarily on the passing of QB junior Jeremy Thomas, the rushing of junior Malachi Peterson and the steady defense of seniors Zayvion McCluster, junior Adarius Hayes and senior Fotu Nafitali.
The winner of East Bay-Largo will contend Nov. 25 in the playoff finals with the winner of this week’s Jesuit vs. Gaither for a crack at the state championship Dec. 2.