On grand display at the entrance to the much-anticipated Pebble Creek conservation park in Riverview is a statute of the town’s founder, Benjamin Moody.
The statute sits in the center of the traffic circle roundabout that gives entrance to the 27-acre conservation park, which features a quarter-mile paved walking trail, a .5-mile natural surface hiking trail, three large pavilions with picnic tables and two native-planted areas with a pollinator garden. Future plans for the pet-friendly park call for a walkway overlooking the Alafia River.
The park’s grand opening has been scheduled for 2 p.m. Nov. 17 at 9955 Riverview Drive.
Hillsborough County commissioners at their Aug. 17, 2019, meeting, issued a call for artists to submit their designs for the Moody sculpture. Artist Geza Gaspar of Venice, Fla., submitted the winning proposal. According to project documents, the partner is Bronzart Foundry, Inc., based in Sarasota. 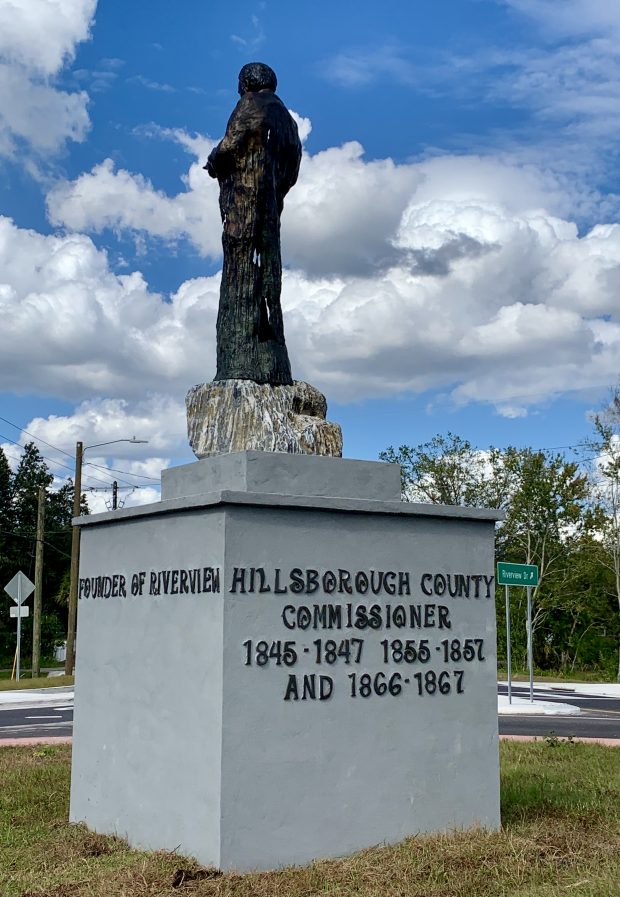 Linda Chion Kenney
Two sides of the four-sided base of the Benjamin Moody statute in Riverview note his claim to fame as founder of Riverview and his terms as a Hillsborough County Commissioner.

The 6-foot statute sits on a four-sided based that notes Moody’s full name and his claim to fame as “Founder of Riverview.” A third side notes Moody’s three terms serving on the Hillsborough County Board of County Commissioners, giving the dates as 1845-1847, 1855-1857 and 1866-1867.
The fourth side of the base takes note of the town’s original name, with two lines of text that read “Riverview, FL” and “Formerly Peru, FL.”
A second statute for inside the park is set to be completed later this year. The chosen design replaces the design selected originally of a Seminole woman and child.
The statute in the works is entitled, “Sovereign, The Unconquered,” with creation by The Milligan Studio.
According to the artist’s intent, the studio, “in collaboration with artists and craftspeople of the Seminole Tribe, is set to honor “the spirit of the historic Council Oak,” featuring “a series of re-envisioned patchwork story panels designed by Seminole artisans.” 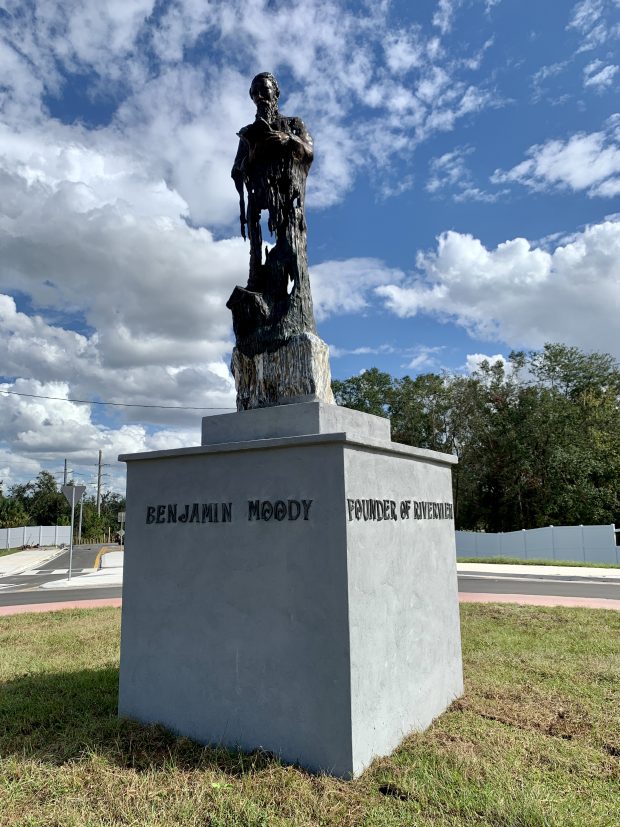 The studio notes that “our design was influenced by the Miss Seminole contests in which young women, dressed in traditional costume, are chosen as ambassadors based on qualities of leadership and a deep understanding of both tribal history and the potential for securing the community’s future in a modern world.”
The Milligan Studio was to commission Native American artists and craftspeople to tell the history of the Seminole Tribe in patchwork story panel designs for “headdress, dress and cape of Sovereign.”
Noted as project partner and historian is Dr. Nicole Mary Milligan, who grew up in Tampa with a Seminole stepfather and sister. She’s working with Kate Macuen, director of the Seminole Tribe of Florida’s “Ah-Tah-Thi-Ki” museum in crafting the story panels, which will be translated by the studio into bronze and glass.
The anticipated costs for each of the bronze sculptures was set at $75,000, with funds for the collective cost of $150,000 coming from the Hillsborough County Capital Improvement Program approved for fiscal years 2021-25.