Three of the five South Shore high school football teams are pleased and prepping to open the first round in the FHSAA playoffs Nov. 11. It’s win or go home this Friday night for East Bay (9-1), Sumner (8-2) and, surprisingly, a 5-5 regular-season Riverview Sharks. The two other South Shore squads ended their seasons last week. Lennard fell to l-9 in a romp from Armwood. Spoto finished 4-6 by scorching 0-10 Freedom 62-0.
East Bay hosts 7-3 Osceola High of Seminole County at Big Bend Road Friday at 7:30 p.m. in the quarter finals of the Florida High School Athletic Association State Football Playoffs. The Indians of Coach Mike Gottman rely on a well-tuned, versatile ground attack with a super-conservative passing game and a tough, veteran defense as well, ready for the visitors.
Osceola is riding a four-game winning streak. The Royals have scored 252 points on the season and given up 123. That compares to East Bay, which has pounded out 403 points and yielded 140 in running up a sterling season 9-1 mark. Osceola won last week 35-6 over Hollins High of St. Petersburg.
Sumner is traveling in its opening round of the state Metro playoffs. The nouveau Stingrays tackle venerable 8-2 Plant High of Tampa at 7:30 p.m. there Friday evening. (See separate article on Sumner in this week’s Observer News.)
The Riverview Sharks are an unexpected pick for the state playoffs. Coach Tony Rodriguez’ Sharks squad has been playing without its regular quarterback lately and fallen to a 5-5 worksheet. The latest loss last Friday was a 49-6 mauling by 6-4 Steinbrenner. Now, the Sharks are looking to extend the playoff second season by putting most of its marbles on stellar runner and receiver senior Harry Hensley. First, Riverview must visit Naples to take on a well-balanced 8-2 Gulf Coast High at 7 p.m., unbeaten in five games on its home turf this season. 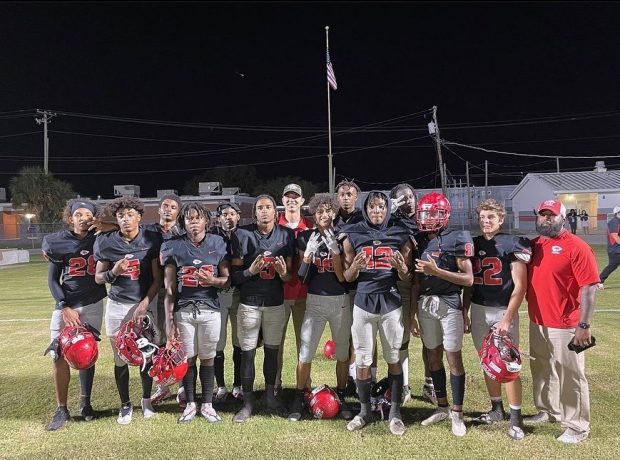 The regular football season mercifully came to a close for the 1-9 Lennard Longhorns. Coach Matt Kitchie is packing it up for the fall at Lennard, looking for a new start in the spring. The Longhorns were thumped 62-0 by 6-4 Armwood in Ruskin last week. Lennard got 68 yards passing from Liam McDowell’s 8 of 14 passing but, woefully, only scant rushing yards. Lennard ended the season with only 80 points tallied. The Horns coughed up 381 points over their 10 games.
Spoto also closed out its season. he Spartans’ new head coach this season, Keith Chattin, would have liked a better record this season but, realistically, cannot be too disappointed. Spoto finished 4-6 and has some gifted athletes scheduled to return next season. Tops among the anticipated returnees is the sensational, slim, scatback soph Z’orey Cotton.
Cotton had another banner night versus hapless Freedom last week. The swift sophomore scooted for four of Spoto’s seven TDs, rampaging for 98 yards on 13 totes. That gives Cotton 15 touchdowns for the season. The Cotton guy has compiled an average of 104 rushing yards per game. Coach Chattin had also developed two other staunch athletes late in the season who have exhibited great promise: frosh QB Nathan Richardson and soph QB Jaxson McNeeley. In addition to the Cotton quadruple, Spoto received against Freedom touchdowns from Richardson, soph Dylan Yates and junior Julian Hayag. Spartan senior Yuriah Watson completed his career with six PATS and a 38-yard field goal in the Freedom demolition.