Continues march towards a playoff berth

The Sumner Stingrays, led by head coach Alonzo Ashwood, traveled to Fishhawk on Friday, Oct. 28, and defeated the Newsome Wolves 34-24 to keep their playoff hopes alive and extend their winning streak to three games. The Stingrays came into the match-up off a bye week and kept their focus on the prize, heading into a non-divisional home game vs. Middleton to wrap-up their season in the Tank. Sumner completes district play at 2-1 with its only district loss coming against district leader Durant, which has a perfect 3-0 district record. 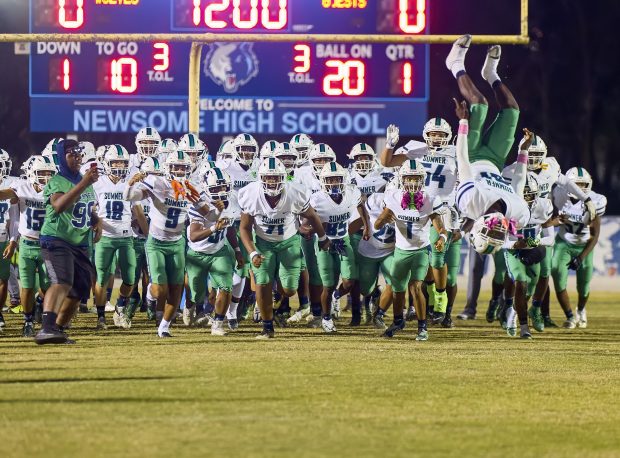 Francis Fedor Photos
Sumner junior WR does a Sumner-sault to lead the team out onto the field prior to the start of the game. 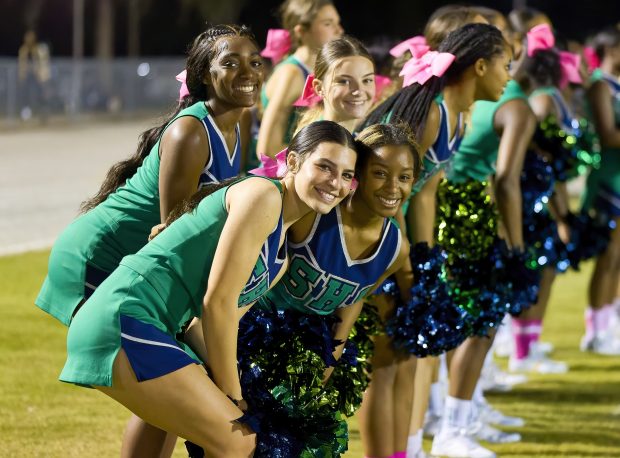 Stingray cheerleaders pose before they cheer on an extra point attempt. 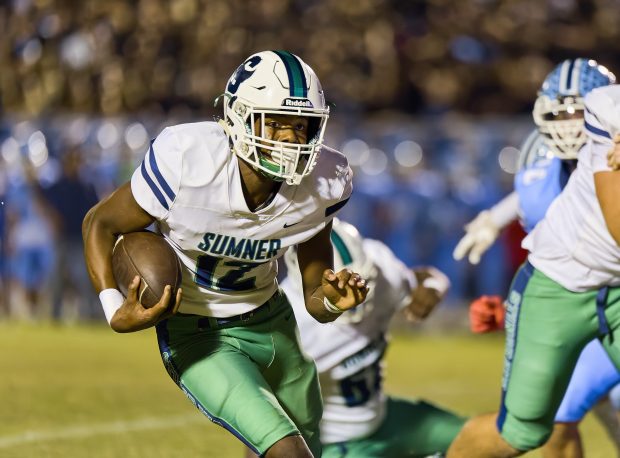 The Wolves, in a game that celebrated their senior class in a pregame ceremony, got on the scoreboard first with a 10-yard pass play. It wouldn’t be long before the Stingrays answered with their own score on a 33-yard run by junior Devin Spencer. Spencer would be the star of the Stingray running game for the night, piling up 112 yards on six carries. Junior QB Greg Smith dropped back to pass 23 times, completing 14 of those attempts for just over 250 yards. Stingray senior Najee Dade and underclassmen Javielle Boyd and Tyler Williams, were the big targets for the night with each having three catches for just under 200 yards for the trio. The high stakes of the “win or go home” game was evident in the back-and-forth nature of the scoring. However, Sumner held a 20-10 advantage headed to the locker rooms for half-time.
The half, as has been the case with HS football around Hillsborough County this season, featured both bands performing. The winds created a little challenge with the props for Newsome as one of them started to blow away, forcing the performers to chase it down. The teams returned to the field, and the Stingrays threatened to blow out the Wolves on a 23-yard completion from Greg Smith to Manny Noesi to push the Sumner lead to 27-10. Newsome got a boost from special teams and a big return to set up the Wolves for a quick TD to pull back within 10 points. Stingray Spencer would get the points back with a 20-yard run, capping his four-TD night, to put Sumner back up by 24 with the clock ticking away in the fourth quarter. Newsome added a score in the waning moments of the quarter to make the score look more respectable, but time ran out on the Wolves and, potentially, their playoff hopes. Newsome had a big night on offense, finishing the night with 328 total yards — 209 via the running game — but had the bigger defensive lapses on a night where both offenses thrived. 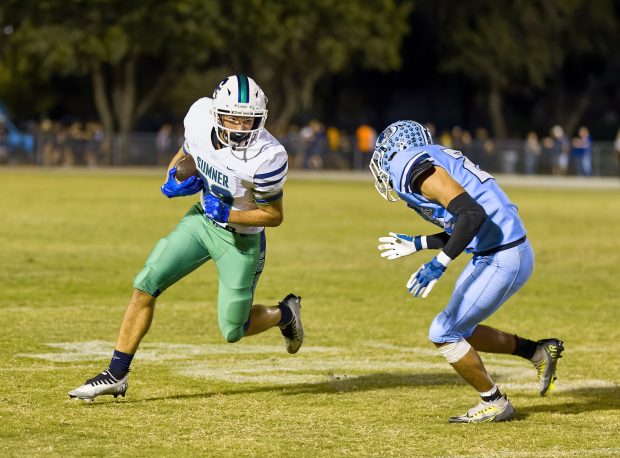 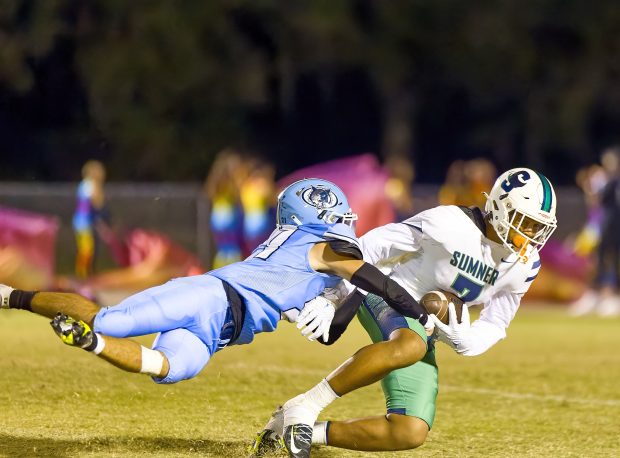 Stingray sophomore WR Tyler Williams goes to the ground after making a reception.

Sumner returns home to honor its senior class after having watched senior night at Riverview and Newsome over the past three weeks. The Tank will welcome the team home with the hopes of celebrating a playoff berth and its seniors against Middleton on Friday, Nov. 4, which has the potential to be a very festive night to conclude the Sumner regular season.
Correction: I noted Riverview QB Harrison (Harry) Hensley was going to play football at Stetson University and stay in Florida. Harry will be playing football for Davidson College in North Carolina after he graduates.