The five South Shore high school football squads play their final games of the season this Friday evening, Nov. 4. East Bay High is expected to win its District 6, with an 8-1 regular season and 3-0 district worksheet now, and advance to the Nov. 11 state playoffs opening round.
East Bay Head Coach Mike Gottman got back on the winning trail against Bloomingdale last Friday 40-36. The Indians face a breather of sorts at home versus 3-6 King High this Friday. East Bay apparently is set to open play Nov. 11 against an unnamed foe in the first round of the FHSAA (Florida High School Athletic Association). At this point, the only other South Shore football squad with an excellent shot at the playoffs is 7-2 Sumner, which closes the regular season Nov. 4 at home against 5-4 Middleton.
The Lennard Longhorns, now 1-8, also battled their way to a 34-24 victory at Spoto High, 3-6, last week. The Longhorns of Head Coach Matt Kitchie finally registered a win this season. Lennard has Armwood, a tough 5-4 opponent, Nov. 4 in Ruskin, hoping to pick up a final win. Spoto concludes its season against 0-9 Freedom in Tampa.
The Riverview Sharks under new coach Tony Rodriguez had early-season visions of making the playoffs. Now all the 5-4 Sharks want is to end the season on a victorious note versus 5-4 Steinbrenner High in Lutz.
East Bay re-discovered its offense and needed it all for 40 points to take the win last week over the Bloomingdale Bulls in Valrico. East Bay was upset by Berkeley Prep 14-0 the previous week. To claim the 40-36 victory over the Bulls, the Indians relied on senior quarterback Nathan Carter’s passing and running, senior running back Vincent Ketchup and junior running back Jaelin Sneed, along with defensive stalwart junior Emanuel White. Carter scored twice on the ground while picking up 72 yards on 20 runs. The big senior hit 4 of 7 passes for 83 yards and a TD to junior Ronde Roseboro. Ketchup carried 17 times for 159 yards including a 63-yard jaunt and two scores. Sneed plowed for 123 yards on 22 rushes and scored a touchdown. Leading Indian receiver senior Aiden Showers added 49 yards on pass receptions. East Bay escaped, despite the super night put together by versatile Bull senior Christian Bodnar, who scored four TDs while toting the pigskin 13 times for 283 yards.
Lennard socked Spoto behind the quarterbacking of former back-up junior Liam McDowell. The Longhorns tapped senior Sammy Randle III and senior Draiden Neidge as Defensive and Offensive Players of the Game. McDowell and senior QB Tyler Russell both missed last week’s game due to injuries. Russell is out for the season with a broken leg. A pair of ex-junior varsity QBs have been standing in, struggling at quarterback. Coach Kitchie was pleased to see McDowell return. The junior hit 7 of 15 passes for 79 yards and a TD. Senior Horns running back Neidge added 75 yards on 14 carries and added a TD. Frosh running back Kaleab Sanders surprised Longhorn fans with 49 rushing yards and a score on 13 totes. The Longhorns rose to the occasion for a victory behind the all-around play of their defense, which stymied Spoto scatback soph Z’orey Cotton and senior running back Cori Ponder. Cotton finished with 37 yards rushing, 75 yards receiving and 51 yards on kick returns while Ponder could only muster 11 rush yards and 21 receiving yards.
Spoto Head Coach Keith Chattin went with freshman Nathan Richardson at QB who hit 8 of 15 in the air for 163 yards and three TDS. Senior Spoto defensive star Jabari Judge contributed 50 yards and a pair of receiving scores in his role on offense. The Spartans senior Yuriah Watson helped keep Spoto in the game with 3 of 3 extra points kicked and a 27-yard field goal.
Lennard’s junior Dominic Smith, Randle and senior Gianni Filbrunn added touchdowns for the Longhorns. Soph Aiden Gibbons and junior Williams Ahlgren both booted a pair of PATs. 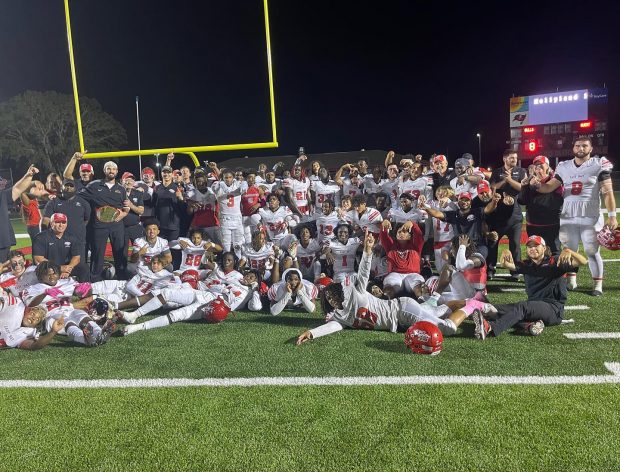 Riverview continued to go with versatile offensive stalwart senior Harrison Hensley at quarterback. Hensley garnered 165 yards rushing and was aided by Sharks running backs Rico Shoats 72 yards rushing and soph Andrew Lee’s 100 yards on the ground. But former QB Aaron Turner’s arm was noticeably missing for Coach Rodriguez. The Sharks did not pick up any yards through the air and succumbed to powerful District 8 champ Durant on the road. Riverview led 26-15 at half. But Durant continued to hand the ball to junior Alex Daley who picked up 171 yards on 16 carries and a TD. The Sharks could not dent the end zone again. Durant tallied the winning score with nine minutes in the game to take the comeback win over Riverview 30-26. The Sharks wrap up the 2022 campaign this Friday evening, looking for a winning season in Steinbrenner.