The USA Patriots, formerly know as the Wounded Warriors, made an appearance at Valencia Lakes and won an exhibition game against a group of softball club players known as the Valencia Lakers 18-10. The USA Patriots travel the country playing in tournaments and exhibitions to raise money for various causes, including the funding for a camp for children with limb loss, which provides the kids a support group that understands the challenges they face. The event raised about 4K for the organization. 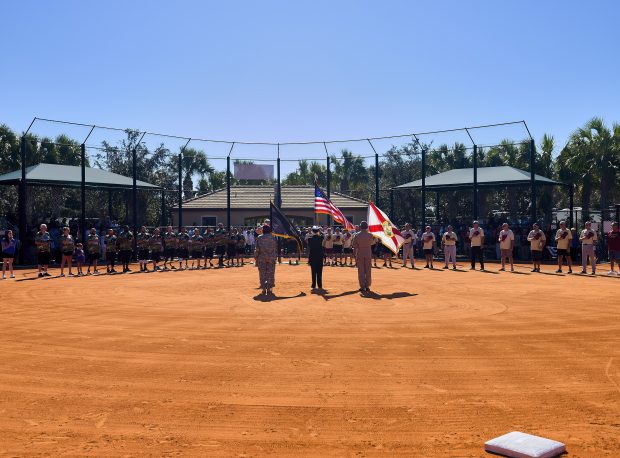 Pregame activities occur as the teams line up for the national anthem inside Valencia Lake’s Celebration Field. 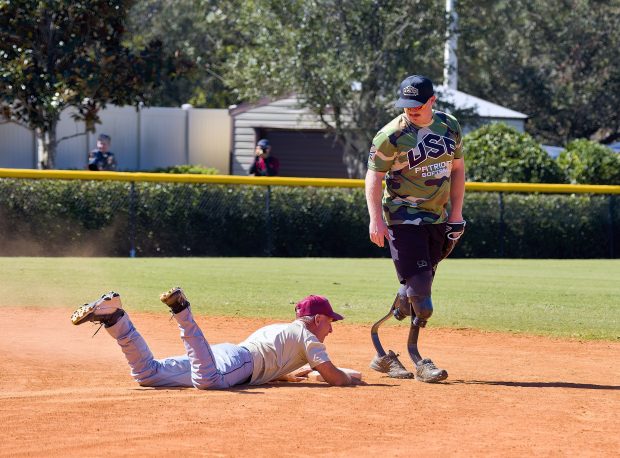 VL Laker dives safely into second as a Patriot infielder looks on. 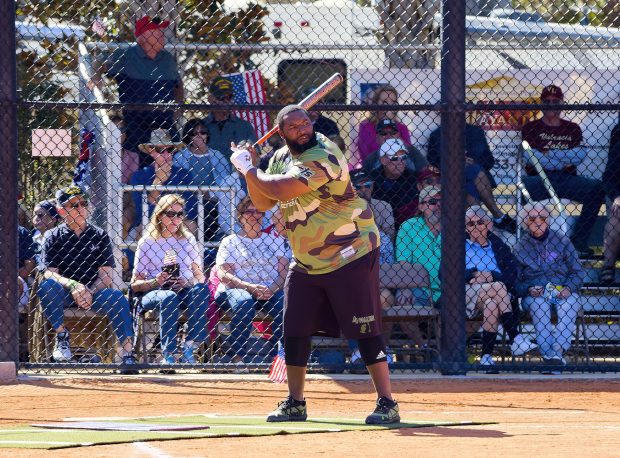 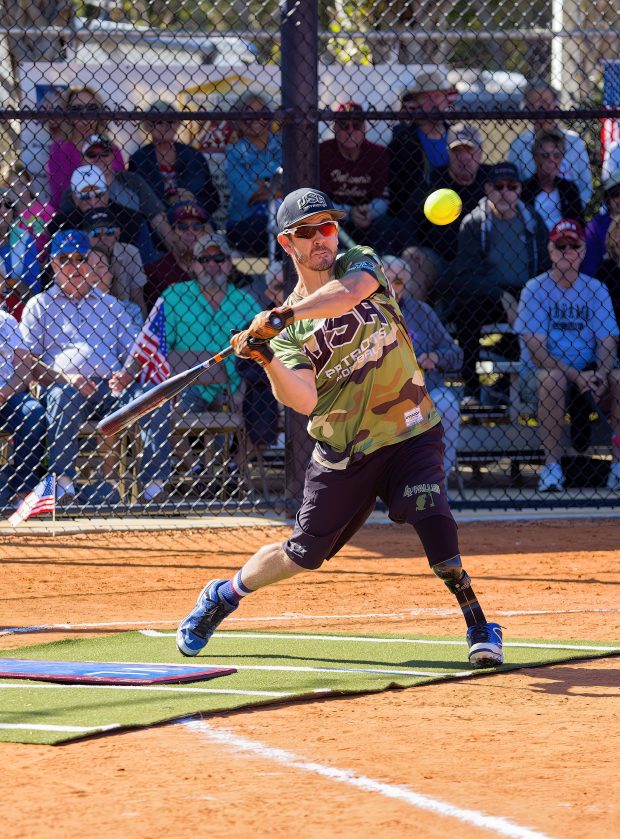 The idea for this game was born early this year and started to gain momentum over the summer. Club president Pete Liotta formed a committee to work on bringing the Patriots to Valencia Lakes. There were a number of requirements in order to secure the team’s making the trip to Wimauma. The organization requires the inviting entity to cover transportation and lodging costs. The team, a selection of players from a roughly 30-man roster, traveled to our region, stayed at one of our local hotels and was shuttled from the hotel to the game with an escort of Hillsborough County Sheriffs and a motorcycle squad made up of military veterans. A catered lunch was made available, for a donation, by Mission BBQ and served by the Gary Sinise foundation members. The national anthem was sung by the Valencia Lakes Singers. The Military Club of Valencia Lakes served as the welcoming committee. The event was attended by over 500 fans from the community, and the VL Golf Cart club transported fans from the VL Clubhouse parking area to the field to make field parking available for the handicapped.
The game itself was a fun time for the teams and the fans. The Lakers served as the home team for the game and took the field after player announcements and the first pitch. The first inning ended without either team scoring, but 0’s on the scoreboard wouldn’t last long. The Patriots posted a five-run (a senior softball limit) second inning with a two home-run effort out of the first four hitters. The second blast cleared the screen that keeps balls from flying out onto 301. The VL Lakers got a run back in the bottom of the second, but the Patriots again matched its second inning total, posting another five-run inning. The home team would add three-run innings in the 4th and 5th innings and finished the game with 10 runs. The Patriots would add another five spot in the sixth inning and that would be too much for the community team to overcome. The Patriots put on a show of power, with four HR’s and were appreciated for their efforts by the VL community. The sixth inning featured the VL Singers and a rendition of “Proud to be an American.” The game featured a player from the Tampa area, John Mitchell (Big John), who served in the Army and was one of the four Patriots to hammer a HR, his being the one that cleared the netting and is probably a ‘gator play toy.
The Patriots finished the evening with an invite to a mixer with the VL New York Club, which featured a rock-and-roll band that had the attendees sharing their appreciation for all that the USA Patriots gave to defend our freedoms. It was a great day for the Valencia Lakes community and for patriotism. The team is planning to return to the area for a visit to spring training in Lakeland in March. Keep an eye out on the USA Patriots website for more information.