The Spartons welcomed Brandon High School on homecoming night at Spoto High School, and sent the fans home happy with a 27-8 win last Friday. For Spoto head coach Keith Chattin, it was his team’s third win of the season against five losses. The 0-8 Lennard Longhorns come to Spoto this Friday evening. Spoto closes the football season versus hapless 0-8 Freedom High in Tampa Nov. 4.
The first quarter versus Brandon was spent with the two teams feeling each other out and exchanging field position. Brandon was first to crack the scoreboard with a short run by senior RB Christopher Allen Braswell, but it was the team’s last score of the game. Spoto answered with its own TD early in the second quarter but failed on the extra point as the ball was mishandled on the hold. The second quarter was much of the same up until about two minutes left in the half. The Eagles stalled on a drive and gave the ball back to the Spartans. Budding star sophomore QB Z’orey Cotton, already a team captain, tried to make something happen. Cotton busted free for a 20-yard gain but coughed up the ball at the end of the run. Cotton is a dynamic player with big play potential every time he touches the ball. Brandon failed to do anything with the turnover, Spoto utilized its timeouts and the Spartans were back in business. Spoto took two plays to put the ball into the end zone, going to the air to take a 13-8 lead into the half. 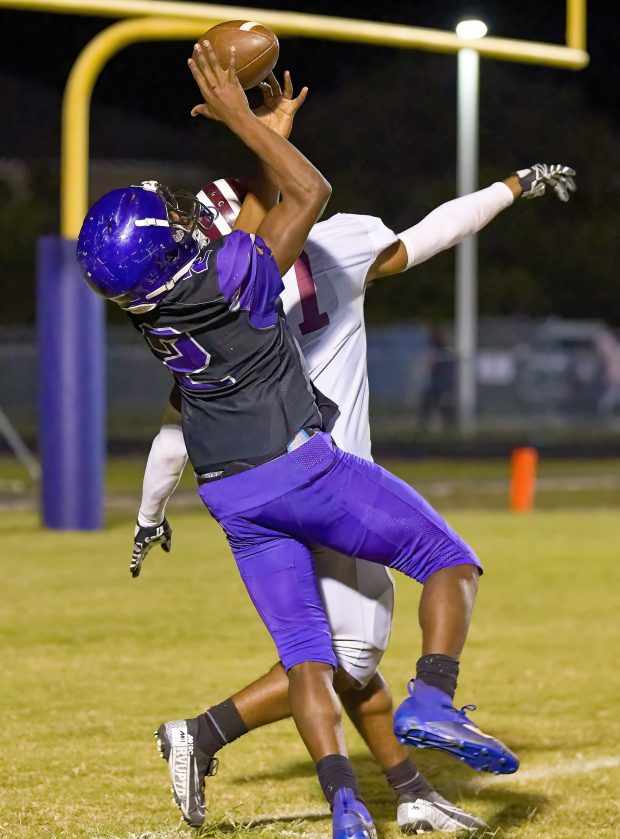 Spartan Z’orey Cotton hauls in a TD pass in the third quarter of the team’s win vs. Brandon. 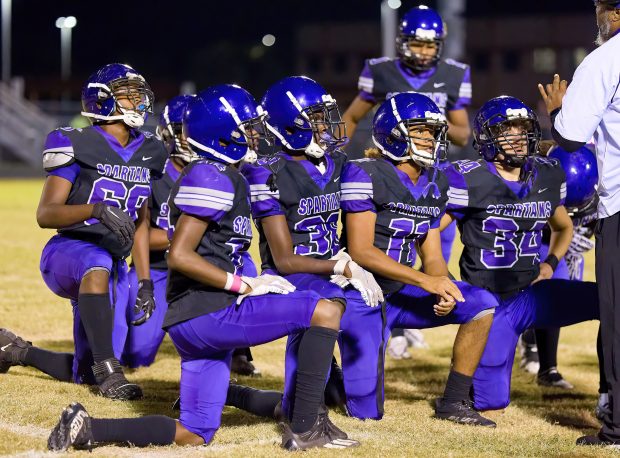 The Spoto Spartan defense gets instruction during a time out on the field. 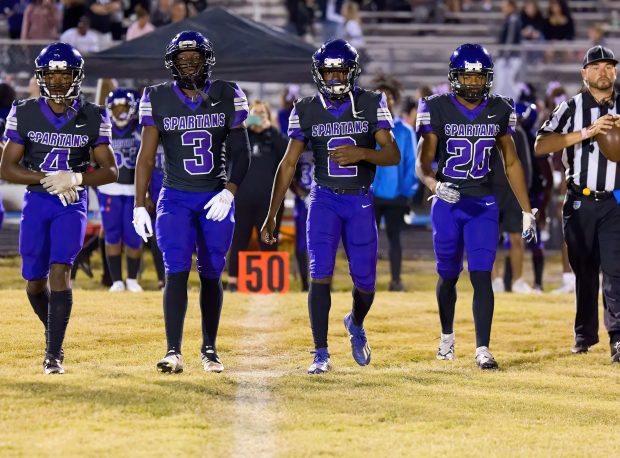 Halftime featured the Spartan band and the homecoming court, although the crowning was to take place on Saturday.
The Eagles TD in the first half would be their only score of the night as the second half was owned by the Spartans.
Z’orey Cotton got into the scoring column on the receiving side of the ball by making an incredible catch on a ball under heavy defensive pressure. Cotton got a hand on the pigskin and juggled it before tucking it in as he crossed the goal line. Spoto would add another score to close the night and send the home fans away happy.
Spoto’s defense was led by Takoki Brown, Jabari Judge, Justin Baker, Chris Harris, Justin Walters, Xavier Ortiz, Kaiel Stewart and D. Williams.