Three more Fridays under the lights remain in the regular football season for high schools in Florida. That includes the South Shore.
After the 2022 regular campaign ends Friday, Nov. 4, the 2022 second season—playoff football—starts…for a select few. As of this week, the undefeated East Bay Indians continue to roll. Head football coach Mike Gottman of the Indians sees this as a season made up of “the haves and the have nots,” unofficial and record-related categories. The “haves” sport winning records and the “have nots” are well under water with losing records. East Bay, on paper, is expected to complete an unblemished 2022 regular season. Once the new, two-tier playoffs start, it is anyone’s guess how East Bay or any of the other “haves” from the South Shore will fare. In case you missed it, the FHSAA(Florida High School Athletic Association) voted several months ago to change its playoff system from one tier to a two-tier Metro and Suburban system. Hillsborough is one of the largest counties in Florida, and its high schools are part of the new Metro system.
East Bay cruised past the struggling and winless—and injured— 0-7 Lennard High Longhorns 35-0 last week. The Indians, now 7-0, are a heavy favorite to post wins in all three remaining regular games. Next up for East Bay is a Friday trip to Tampa to face 3-3 Berkeley Prep. After this week, the Indians close the regular season as favorites over Oct. 28 foe 3-3 Bloomingdale at Valrico and heavy favorites over 2-6 King High at East Bay Nov. 4.
Other South Shore football schools looking to end the season on a positive note and make a run through the post-season are Sumner, now 6-2 after topping Riverview, a third South Shore distant hopeful. The 4-3 Riverview Sharks fell 28-21 to Sumner at Riverview last week. East Bay is an almost certain lock for the playoffs, due to its unbeaten regular and district record. At 6-2 overall and 1-1 in District 8, Sumner has an outside shot at making the playoffs. Riverview is likely out of the playoffs as are Spoto and Lennard. The Sharks of new head coach Tony Rodriquez travel to Dover to tangle with 5-3 Strawberry Crest Oct. 21.
Sumner has an opening this week and then tackles the 4-3 Newsome Wolves in a tough match at Lithia Oct. 28 before closing the regular season as favorites versus 4-3 Middleton at Sumner Nov. 4. (See separate article and photos of Sumner-Riverview game.) 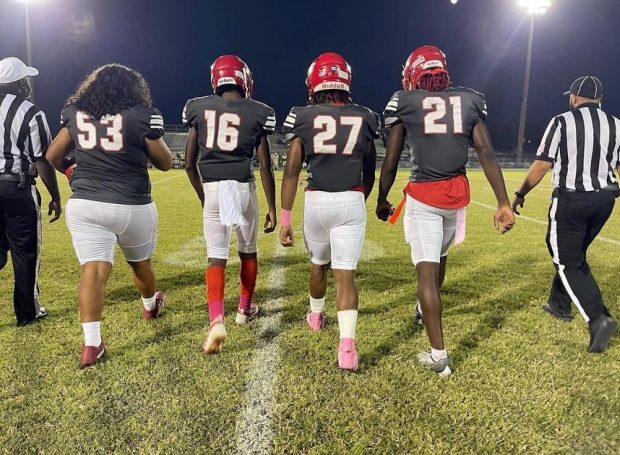 While this football season can count East Bay, Sumner and Riverview among the “haves” of high school football for this particular season, the “have nots” currently include the 2-5 Spoto High Spartans, who hope to win two or three of their last three games. Three wins would put the now 2-5 Spartans at .500, a mark which could move Spoto, under new head Coach Keith Chattin, toward the category of “haves” in the South Shore next season at Spoto. Meanwhile, winless Lennard, of veteran head coach Matt Kitchie, continues to struggle again this season and probably next season as a “have not,” looking to gain at least one victory over either Spoto on Oct.28 or with 4-3 Armwood at Ruskin Nov. 4, before the curtain falls on the 2022 regular season. Coach Kitchie was forced to play two JV quarterbacks in the loss to East Bay. Senior QB Tyler Russell is out for the season, having sustained a broken leg in the Sumner loss Oct. 7. His backup, junior Liam McDowell, had to sit out the East Bay loss due to an injury in a vehicle accident.