Sumner took to the field on Friday night, Oct. 9, and put away Lennard HS 41-5 on Sumner’s homecoming night.
Alonzo Ashwood looked to refocus his squad after two tough losses against Wharton and Durant, a program that the team has struggled with in their three clashes.. The Stingrays faced South Shore rival Lennard without QB standout Greg Smith for the second straight week, as well as starters Cameron White (DE), Zach Walker (LB) and Kylen Webb (DB). RB Jaheim Hudson also sat out with an injury. Smith said that he expected to return to practice on Monday and was looking to return to his starting role at Riverview on Friday Oct. 14. In his place, Alex McLeod got the call against the Longhorns, his first varsity start. McLeod was a standout on the 2021 JV roster where he led the team to a 5-1 record and picked up where he had left off in his JV season, marching the team down the field for the opening score. The drive consisted of all running plays. McLeod’s first pass play came on the first play of the second Stingray series, but a running play resulted in the second touchdown. His first passing touchdown was an 18-yard hookup with two-sport (basketball) standout Tyler Williams. It was his second touchdown, an 80-yard completion with senior WR Eeli Singleton, where McLeod showed off his strong arm and accuracy that had led the JV squad to its success. McLeod finished with 234 yards passing, completing 13 of 22 pass attempts and maintaining his composure in his first start as a Stingray varsity QB. 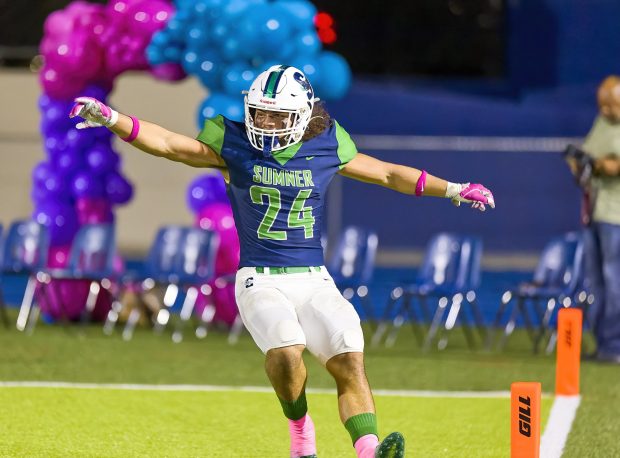 Francis Fedor Photo
Stingray Keoni Denny celebrates his TD run, the first TD of the night for Sumner on its way to a 41-5 win. 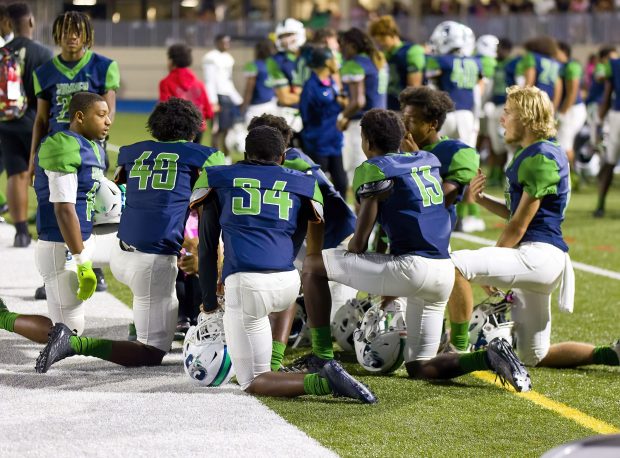 Francis Fedor Photo
Sumner offense takes a knee on the sideline out of respect for the injured Longhorn player. 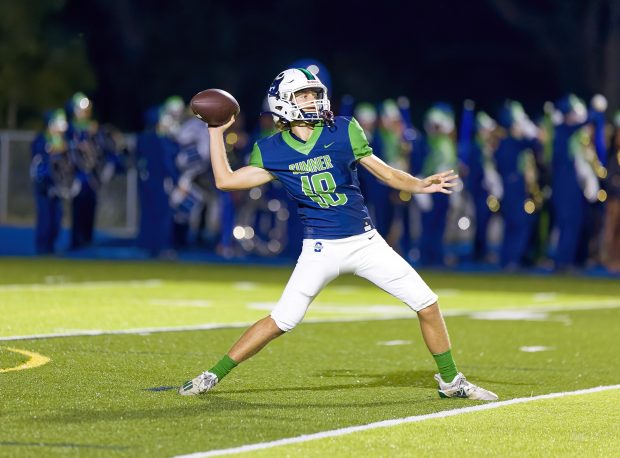 Sumner also got big game from a number of players. Senior two-way standout Keoni Denny rushed for 45 yards on three carries, including a TD, but was a force on defense, disrupting the Longhorn offense, forcing the offense to focus on where he was bringing pressure from and creating loose balls and forcing the QB to make rushed throws. The defense held Lennard to 45 yards passing, forcing the Longhorns to keep their offense on the ground where they only picked up 110 yards on 30 carries for a 3.7 per carry evening. Lennard’s only first quarter points came on a snap over the head of Stingray kicker Kevin Elsner who had to take a safety. Najee Dade made an incredible catch where his back was on the ground, but he stayed focused on the ball and hauled it in for another Stingray TD. Sumner junior TE Charlie Bartling capped the scoring with the last Stingray TD catch to set the final score. 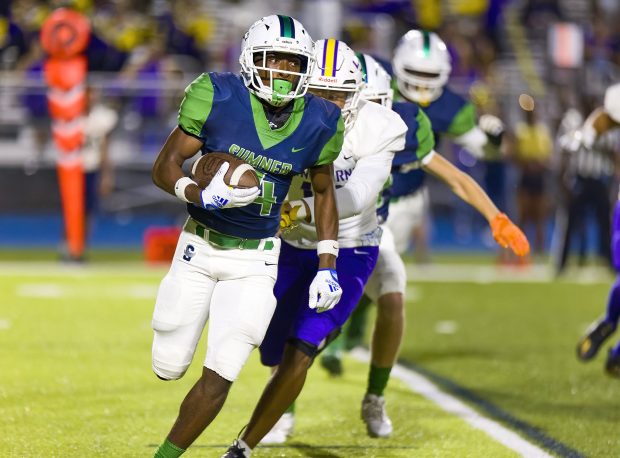 The game came to a halt with 1:22 left in the half as a Lennard defender went down with an injury. The trainers immediately jumped into action and attended to the needs of the player, and the Hillsborough County Fire and Rescue were summoned to the field to transport the player to the local hospital. Everyone’s thoughts went from the game to the player and the hope that the player makes a full recovery. Halftime was a celebration of homecoming festivities. The game was also Sumner’s “Pink Out” game where they raised money for breast cancer awareness and the cheerleaders and student section were awash in pink shirts.
Sumner accomplished its mission of getting back to the tradition of winning and will face another tough opponent, Riverview HS (4-2), on Oct. 14 at 7:30. Riverview also started its season with three wins before losing two in a row. The Sharks, under new head coach Tony Rodriquez, defeated Alonso on Friday, setting up the matchup between two rivals standing with identical 4-2 records. It will be another test for both schools.

Perfect Indians eye Lennard as next victim in Ruskin