The HCA Healthcare’s West Florida Division sprang into emergency response mode recently when Hurricane Ian was projected to hit Tampa Bay. Its preparations included “coordinating everything going on” in its 15 hospitals and freestanding facilities,” said Deb McKell, the division’s media relations director.
This included making sure each had enough staffing, medications, supplies, food, water and generator power to provide for patients during the hurricane, monitoring the storm’s track and communicating with local, state and federal emergency planning organizations and HCA Healthcare’s emergency preparedness team to ensure resources would be available and in place in advance of the storm. 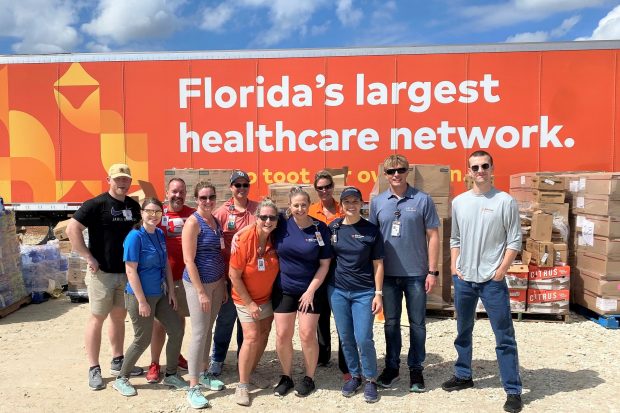 West Florida Division employee-volunteers were joined by others from HCA facilities in Tennessee, Virginia and New Hampshire in supplying daily essentials to storm-ravaged HCA caregivers and their families.

When it looked like Ian was coming to Tampa Bay, patients were transferred from HCA West Florida Division hospitals in Pasadena, South Tampa, West Tampa and Trinity to some of its other hospitals, due to the hurricane’s potential impact. In advance of the storm, South Shore Hospital received some patients and caregivers from South Tampa.
“Since our division office is right off the water on Causeway Boulevard in Tampa, we moved our emergency operations center to South Shore Hospital in Sun City Center,” McKell said, adding the operations team members ate, slept and lived there from 7 p.m. Sept. 27 until the afternoon of Sept. 29.
When the storm track changed, two of HCA West Florida Division’s southernmost hospitals, Fawcett in Port Charlotte and Englewood in Sarasota County, sustained substantial roof damage and minor flooding. Patients were transferred from both hospitals to safer HCA locations, and the facilities were temporarily closed. Englewood re-opened Oct. 6.
Local efforts shine
South Shore Hospital’s Amanda Meredith, a registered nurse and director of clinical informatics, coordinated the effort to move more than 35 patients by coach bus or ambulance, depending on their conditions, from Fawcett to Sun City Center.
South Shore’s CEO Sheldon Barr and members of its Environmental Services staff handed out welcome bags to these patients after their two-hour-plus trip. 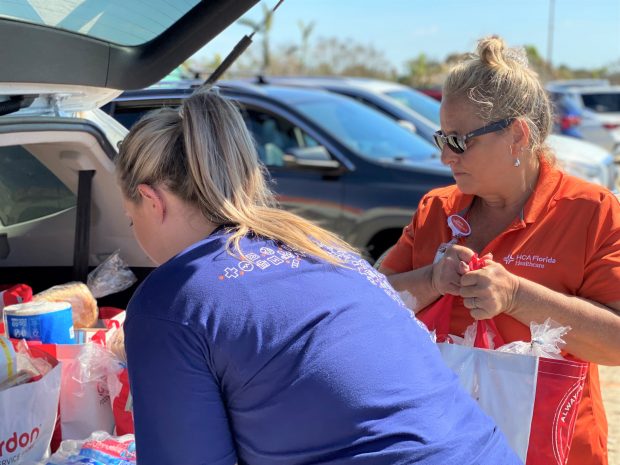 On Oct. 6, after the hurricane passed, Meredith and South Shore Hospital medical telemetry nurse and clinical team leader Tracy Mitchell headed to HCA’s freestanding ER in Cape Coral, which had re-opened the day before. There they handed out all kinds of essential supplies to HCA West Florida Division nurses, patient care, lab and imaging staff technicians, and others who’d been adversely affected by Hurricane Ian. 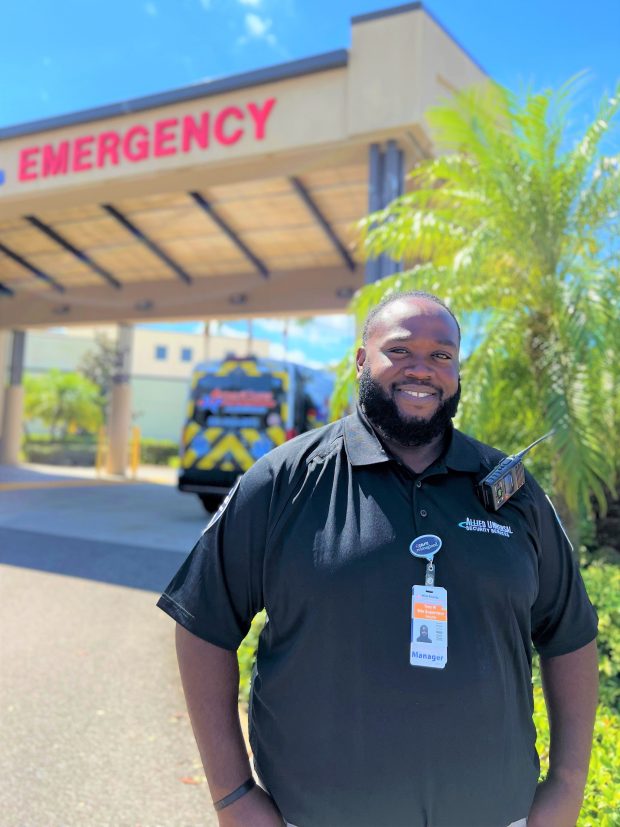 South Shore Hospital security guard Tony Williams also made a difference recently when he helped CEO Sheldon Barr communicate with a deaf patient unable to speak who was among the 35 patients who were transferred from HCA Florida Fawcett Hospital in Port Charlotte due to Hurricane Ian. Tony offered to assist Barr by communicating with the patient through sign language.

Meredith and Mitchell were joined by HCA Healthcare volunteers from Tennessee, Virginia and New Hampshire, plus additional team members from the HCA West Florida Division.
“We had two semi-trailers packed with pallets of essential supplies for our caregivers,” Meredith said, adding more than 125 showed up for help. Including their families, she estimated the effort’s impact was greater than 500 individuals.
“We gave out rakes, tarps, rain boots; and paper towels, toilet paper, shampoo, conditioner and deodorant; diapers, wipes and baby formula; pet food, blankets and pillows; tons of food, including bread, MRE’s, oranges, chewy bars and snacks; shaving cream, hand sanitizer and detergent pods,” Meredith said. “We also provided cases of water, bags of ice and plywood, diesel and gasoline, a shower trailer and a Tide Truck (laundry).
“HCA West Florida truly thought of everything,” she said.
Meredith called the experience “humbling. 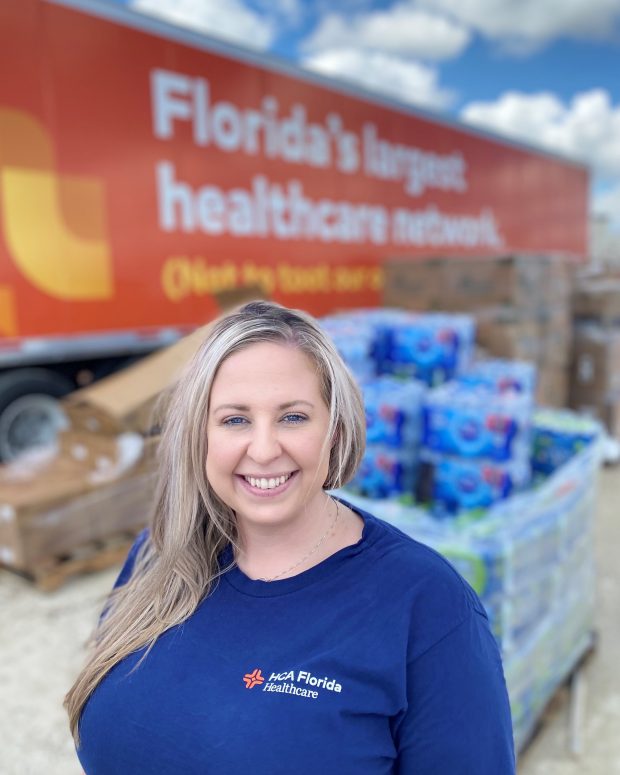 “To hear our caregivers’ stories about losing everything up to and including family members was nothing short of heartbreaking,” she said. “They had roofs blown off, houses completely gone and three-to-four feet of water in the ones that were left standing.
“And they were so grateful we were there to supply them with their daily needs,” Meredith continued. “Many rolled down their windows, started crying and then got out of their vehicles to hug us.”
South Shore Hospital CEO Sheldon Barr was thoroughly impressed with the teamwork, sense of community and employee resiliency demonstrated throughout the overall effort. And she was especially proud of her team.
““It was an amazing effort all around,” Barr said. “We’re here to help our sister facilities until they are back on their feet.”

Meals on Wheels needs are great in Riverview and Gibsonton