The Pelican Players Community Theater will present five performances of Nana’s Naughty Knickers Oct. 20 to Oct. 23 at the Kings Point Veterans Theater in Sun City Center. They will include three evening shows at 7 p.m. Oct. 20, 21 and 22 and two matinees, one at 1:30 p.m. Oct. 22, and the other at 2 p.m. Oct. 23. Doors open 30 minutes prior to curtain.
All shows are open to the public.
The fast-paced comedy is based on a play of the same name by Katherine DiSavino, first produced at the Rainbow Dinner Theatre in Lancaster, Penn., in February 2010. Since then, it’s been widely produced across the country, in Canada and abroad.
“This is a comedy with an eclectic group of characters and a set that’s also a character in its own right,” said longtime director Bruce MacDonald, who recently joined the Pelican Players after relocating here from lower New Hampshire. “And our cast is as eclectic as the parts they’re playing, which only adds to the craziness and fun.”
Nana’s Naught Knickers features Jeanne Naish in the lead role of Sylvia Charles, a young-at-heart elderly woman who lives in a rent-controlled apartment in New York. Unbeknownst to almost everyone around her, including her granddaughter Bridget, and to make ends meet, she runs an illegal boutique from her apartment called Saucy Slips, Etc., selling hand-made sexy lingerie to seniors.
Bridget, a soon-to-be law student played by Barbara Boyle, comes to stay with Sylvia for the summer and is horrified to learn what her beloved grandma’s been up to.
You can only imagine what happens next when other characters, like Sylvia’s best friend Vera Walters, police officer Tom O’Grady and her greedy landlord Gil Schmidt, who wants Sylvia out so he can charge more rent, find out.
“It’s a fun, two-act play filled with humor and plot twists sure to keep the audience entertained from start to finish,” said assistant director Joy Dunn.
Tickets are $16 for the evening performances and $13 for matinees. They’re available weekdays from 8:30 a.m. to 4 p.m. at the Kings Point Box Office, 1900 Clubhouse Drive, Sun City Center. They’ll also be sold at the door.
Seating is cabaret-style or bleacher seating, and ticket holders are invited to bring their own beverages, snacks and cups. Water and ice are available in the kitchen. 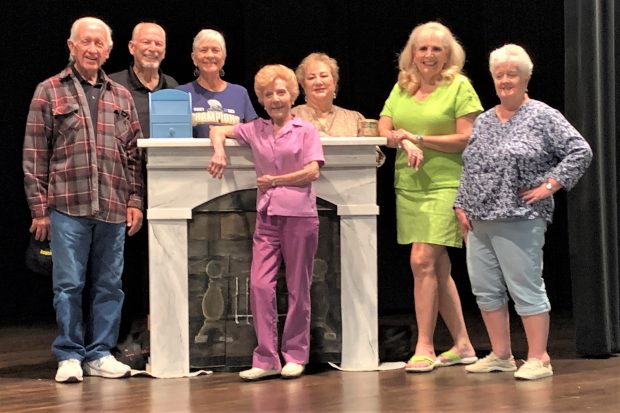 Cast, characters, crew
Jeanne Naish, Sylvia Charles
Barbara Boyle, Bridget Charles
Judy Rodman, Vera Walters
Jack Parry, Tom O’Grady
Danny Tackett, Gil Schmidt
Lucy Malacos, Heather Van Pree
Wendy Smith, Clair Schmidt
Jimmy Sapia, intercom voice and delivery man
Kevin Steinke is assistant stage manager and James Williams is construction lead in charge of set design. Williams is modifying some of the set pieces for this play from those that were left behind by longtime Pelican Player Chuck Foell, who passed away in February.
Keith and Carlyn Postle are the sound crew, and the props crew includes Ruth Lake, Sue Bernagozzi and Guy Bailey. Julie Ramsey is handling makeup and costuming.
If you live outside Kings Point and will be attending the performance, simply drive through the visitors gate and inform the guard you’re there for a play at the clubhouse.
The Pelican Players is a 501(c)(3) nonprofit organization founded in 1981. Proceeds from its performances benefit the Pelican Players Scholarship Fund with the Community Foundation of Tampa Bay, which provides funding for graduating Hillsborough County students pursuing careers in the arts.
The theater group will be busy the remainder of the year producing murder-mystery dinner shows for hire like Crimes of Fashion and Murder at Flontrachet Vineyard; Reader’s Theater performances, like Our Miss Brooks and The Big Little Jesus; and the Caberet Singers theater production, Another Opening, Another Show. For information, visit www.pelicanplayersscc.org/.