Only one of five South Shore high school football teams survived the unusual Monday night football. That honor goes to the 5-0 East Bay Indians. Following the 53-6 shellacking put on Spoto, East Bay remains the only undefeated squad in the South Shore.
Homecoming is being celebrated all week at East Bay High. This Friday night the highlight is the home football game with scoreless and winless 0-5 Chamberlain. Earlier this week on Monday, the Indians’ Vincent Ketchup scored on a pass interception, two rushing TDs and a pass reception from QB Nathan Evans.
All the other South Shore teams, similar to East Bay, had Friday, Sept. 30, postponed to Oct. 3, due to the ravages of Hurricane Ira. The Riverview Sharks fell to 3-2 against Newsome. The visiting 4-1 Wolves from Lithia took care of the Sharks 29-12. A tough Alonso Ravens squad is now 5-1. The Ravens come to Riverview this Friday night. Another team having Friday Homecoming is the 3-2 Sumner Stingrays versus 0-6 Lennard. The Longhorns lost Monday night 33-0 to Bloomingdale. Spoto, now 1-4, is visiting 2-3 Leto, looking this Friday night for a win. 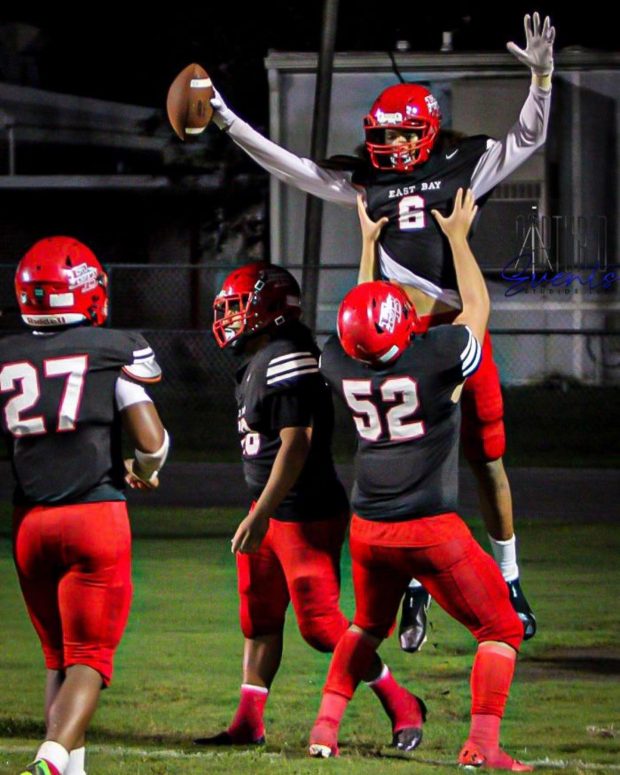