Home News If you missed it, catch the next one
News

A special vaccine clinic arranged for the entire greater Sun City Center community went off without a hitch Sept. 19 and 20, thanks to a coalition of community partners.
“I was able to work out a deal with DeliveRxd Pharmacy so that residents and even their caregivers could get the [Omicron BA4/BA5] shot, even if their insurance wouldn’t cover it,” said Mike Bardell, Sun City Center Emergency Squad chief. “Anyone who had received their first two COVID shots was eligible.”
The Omicron variants now dominate COVID cases worldwide.
Bardell let the Community Association and all senior living facilities know their residents were invited and asked them to spread the word.
Almost all of the people who turned out, however, were from Kings Point, the host site.
According to Matt Permuth, Vesta Services general manager, 1,300 [Omicron] vaccines and 650 flu shots were administered.
“We’re planning another clinic for late October, but the logistics have yet to be worked out,” Permuth said, adding when they are, everyone in greater Sun City Center will be invited.
He joined Bardell in thanking all of the partners who made the clinic a success – DeliveRxd, the Sun City Center Emergency Squad, Sun City Center Security Patrol, Vesta Services staff and C.E.R.T. (Community Emergency Response Team). More than 50 people worked the event, about half of them volunteers. 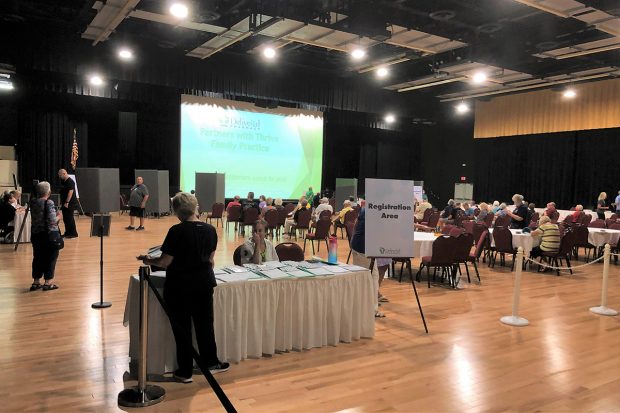 MIKE BARDELL PHOTO
A coalition of community partners put together a special vaccine clinic for the entire greater Sun City Center community Sept. 19 and 20. A total of 1,300 [Omicron] vaccines and 650 flu shots were administered.

Residents were asked to sign up online ahead of time, so DeliveRxd could know how many drugs to draw to ensure there would be enough for all who came and to prevent any waste. They were given a choice of the Pfizer or Moderna vaccine.
When they arrived, no one spent more than 40 minutes, including the wait period required after the shot was administered.
“We heard over and over again how well it ran,” Bardell said.
One unexpected service was that anyone on Medicare was offered eight COVID test kits, which included the option of calling the number on the back of the packaging should they became infected to have a nurse deliver Medicare-covered drugs to their home.
The idea behind the shot clinic was to protect the community and make getting the vaccine easily accessible.
“Anytime more people are inoculated for this, the better off we are,” Bardell said. “I believe it’s so important for the community to work together for the welfare of the entire population. This is what can be accomplished when we do.
“We can go so much further as a team,” he said.
0 comment
0
Facebook
previous post