At the Beef O’Brady’s in Apollo Beach earlier this month, a 99-year-old woman received the Spirit of Kiwanis Award from the service group’s district governor for Hillsborough County.
It was an unexpected moment for Helen Mulrennan Young, set to turn 100 in February, who “with her gracious heart and positive spirit inspires us all to become better servant leaders and to live our highest and best lives.”
So reads the plaque, presented to Young by Karla Nielsen, the governor for Kiwanis District 14. It now hangs proudly in the Brandon home Young shares with her son and daughter-in-law, Jim and Jo Powell.
“Yes, I wasn’t expecting the award, but I know that my Kiwanis family appreciates the things that I do,” Young said. “I’m not physically able to be as active anymore, but I sit here and I use my hands and I crochet.” 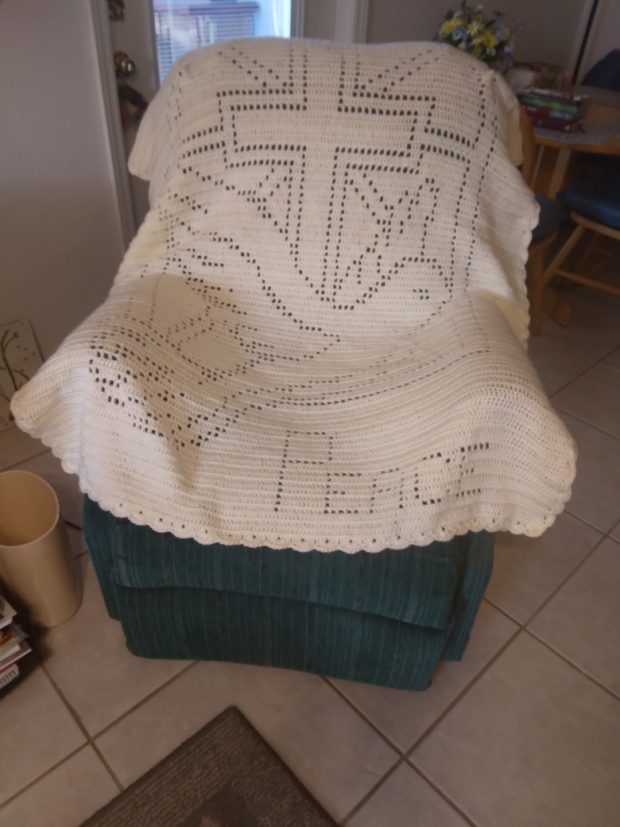 Crocheted by Helen Mulrennan Young, the Afghan that raised $1,000 for her Kiwanis family’s community outreach

And crochet she does, with an impact that reaches far beyond the confines of her club and community. For decades Young has crocheted baby blankets and hats for the homeless, cancer warriors, her Cornerstone Baptist church family, newborn babies and, through Project Linus, for newborn babies born to low-income families.
Recently, one of her crocheted blankets netted $1,000 for the Kiwanis Club of Greater Brandon, which in recent years sponsored a Riverview club that has now folded back into the mother club.
“Every year for a number of years I’ve been making crocheted Afghans for the Kiwanis golf tournament to bring in a little money,” Young said, of the annual tournament that this year is set for Oct. 27 at the Buckhorn Golf & Country Club in Valrico. “That really touched me that my little hands could making something that could bring in one thousand dollars for the club. It brings me such joy.”
The youngest of eight children, Young is set to celebrate her 100th birthday February 27. She carries the torch for her oldest brother, John, who as the state’s entomologist for some 40 years dedicated his life to the study of insects, and for her oldest sister, Annie Mae, who was a secretary before handling home affairs upon her mother’s death. Sister Margaret was a U.S. Army nurse in World War II and brother Frank served with the U.S. Coast Guard in the same war. A U.S. Marine for 24 years, brother Timothy served in World War II and Korea.
Rounding out the sibling clan is Joseph “Jody” Mulrennan, who was active in community affairs and served as a president for the Greater Brandon Chamber of Commerce, which he helped to establish in 1959 for businesses then in the greater Brandon and Riverview communities.
When asked to wax poetic on the secrets of living a long life, Helen Young talks about the faith she practices, the food she eats, the holistic medical care she receives and the community service that keeps her engaged.
“I believe the reason I have longevity is because I have kept my body active and involved my mind,” Young said. “It’s very gratifying to do things in the community and to know that you’re doing something to help others rather than just sitting home and doing nothing.”
Even today, when she still can, Young makes it to the meetings of the Kiwanis club her brother Bud helped found in 1960. In 1966, Young worked at the restaurant where the club held its meetings. When her son, Jim Powell, became club president in 2000, Young, in turn, became a member. Kiwanis International first welcomed women members in 1987.
“It’s one of the smartest things I ever did because Kiwanis has a special place in my heart,” Young said, noting the club’s focus on helping children. “It has given me opportunities in my later years to be able to do things and go places that I would never have done.”
Over the years Young has seen a lot of changes, including the naming of Mulrennan Middle School in Valrico, which sits on land her family once owned.
“Growing up in Hillsborough County, everything was citrus and farming and cattle,” Young said. “This whole area was agriculture. And to just see it all being turned into housing and more and more people and more and more traffic and congestion is just [unsettling].” 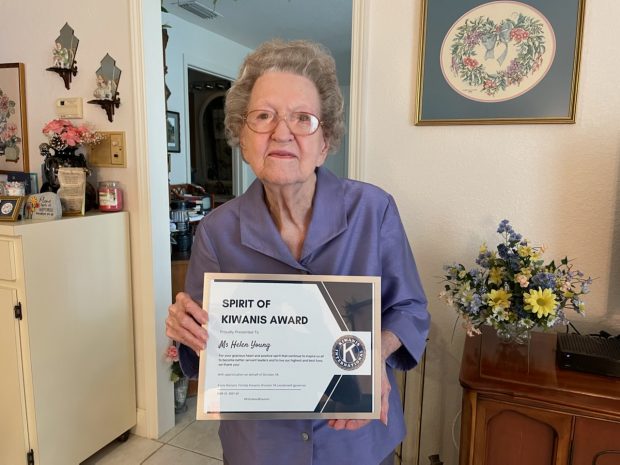 Helen Mulrennan Young, 99, holds the award she received for her Kiwanis service.

Unbreakable, though, is Young’s foundation in faith, friendships and service, which took her through two marriages, a cancer fight with melanoma and the burials of her kin and loved ones.
“My advice is to think about other people and be thankful and grateful for what you have and to keep a positive attitude no matter how dark things might get at times,” Young said. “If you’re negative about everything all the time, all it does is tear your body down and make you sick.”
Indeed, it’s easier said than done, Young said, who noted that in her younger years she worried “about everything, finances, you name it.”
“All it did was keep me under stress,” Young added. “It didn’t change anything, so now I don’t worry anymore. If it’s going to happen, it’s going to happen. If there’s something I can do, I do it, but otherwise I put it in God’s hands.”

Get hands on at Firehouse Cultural Center clay classes