Raised by her family “to be independent and not have to rely on somebody,” Patricia “Trish” Stoecker said it has served her well, both in her military career and post-retirement life.
Stoekcer was recognized in August by the Greater Riverview Chamber of Commerce Military Affairs Committee, which each month singles out one service man or woman for recognition at the group’s monthly luncheon.
“Phenomenal,” is how committee chair Joe Eletto, who served in both the U.S. Army and U.S. Navy, described Stoecker’s military career in a post-luncheon interview.
“Trish is an amazing woman, very low key and very humble,” Eletto said. “Thirty-two years of service to this country, and the things that she has done, it’s just eye-opening and very, very surprising to know that she has had that kind of career.”
Eletto noted, as highlights, Stoecker’s service in Iraq with both prisoners of war and deposed government workers. “Her service is very much tied to the military police aspect of the military,” Eletto said. “She’s commanded some pretty substantial groups and operations.”
Facing “a series of challenges in Iraq,” Stoecker said in an interview that she and her colleagues were guided by the Geneva Conventions, which establish the international legal standards for humanitarian treatment in war.
“It says that we have to provide accommodations and treat detainees at no worse standard than what we provide for our troops,” Stoecker said. “We were very strict about adhering to those standards.”
Looking back from her retirement in 2016, Stocker was commissioned as a 2nd Lieutenant on June 8, 1984, at the University of Tennessee in Knoxville, where she had joined the ROTC. She was first assigned to the 489th Civil Affairs Company in Knoxville.
Additional assignments included moving to Detroit and entering the active guard and reserve program, where she was the Operations Officer for the 785th Military Police Battalion (dealing with internment and resettlement).
She served also with the 220th Military Police Brigade (for combat support) in Gaithersburg, Md., as Brigade Operations Officer. She moved to Baghdad on June 9, 2003, where she worked with the Iraqi Legal Aid Division for the newly established Iraqi government, charged to ensure their safety and access to all Iraqi detainees.
Deployed back to America in 2004 and stationed at the Pentagon, Stoecker was assigned to the Provost Marshall’s Crisis Action Team, which monitored global military operations.
Eventually, she volunteered to be deployed back to Kuwait, where she coordinated communications and information between the Pentagon and theater operations. As the Iraqi War drew to a close, she coordinated the movement of U.S. Army equipment to Afghanistan, storage or destruction.
With these and other assignments, as outlined in materials read at the chamber luncheon, Stoecker built a military career that involved many decorations, including the Legion of Merit, the Meritorious Service Medal (with one Oak Leaf Cluster), the Army Commendation Medal (with four Oak Leaf Clusters), the Arm Achievement Medal, the Army Reserve Component Achievement Medal, the National Defense Service Medal (2nd Award), the Global War on Terrorism Expeditionary Medal and the Army Staff Badge.
The daughter of a father who served in Korea, “We were raised as kids in my family to be independent and not have to rely on somebody,” Stoecker said. “The military just kind of reinforced all of this and took it to another level.”
Through her service, Stoecker said, “I learned that I was able to do more than I thought I could, both physically and emotionally, and I learned to be a more productive person.”
Stoekcer said it was humbling to receive military recognition at the Riverview chamber luncheon Aug. 30.
“First of all, I was humbled to be selected,” Stoecker said. “Second of all, it was just a little overwhelming because, as members of the military, we just feel that we’re doing our job. And those of us who get to do what others consider extraordinary things, we don’t consider them extraordinary. They’re just part of our jobs.”
Upon retirement, Stoecker moved from Washington, D.C., to Florida with her husband in 2017. In February 2018, she started her own business, as a Pure Romance Party consultant, organizing home parties that feature bath, beauty and massage products and lingerie and intimate items for the bedroom. 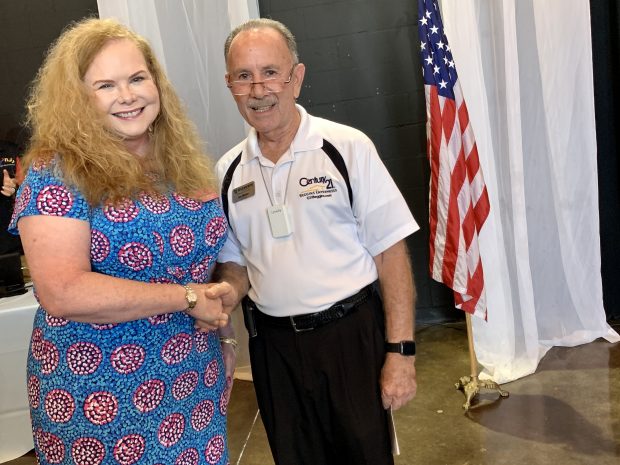 “It’s 180 degrees different from what I was doing before,” Stoecker said. “I have a home office. I love helping women.”
But why, one might ask, do anything after an illustrious and stress-filled career in the military?
“Because I have to do something,” said Stoecker, who noted that she earned a Master’s of Business Administration (MBA) degree in the service and always wanted to open her own business. “I can’t just sit around and do nothing. I’m always reading or researching or talking to people or going places. I network a lot. I like to meet new people and maybe provide some help. I mentor a lot of young business people.”
Bottom line, “I can’t sit still,” Stoecker said. “That’s just not me.”
For more on Stoecker’s business, visit the Greater Riverview Chamber of Commerce at www.riverviewchamber.com and search for Pure Romance Parties by Trish, LLC.