Home News Open your heart, wallet to support a cure for Alzheimer’s
News

Open your heart, wallet to support a cure for Alzheimer’s

Alzheimer’s is perhaps the most dreaded of all fatal diseases, one in which the memory progressively deteriorates, the mind loses its ability to focus/concentrate and the body finally forgets how to function.
More than 6 million Americans are currently living with Alzheimer’s, and according to Alzheimer’s Association statistics, one in three seniors dies from the disease or other forms of dementia. You or someone you love could be among them.
Members of the South Shore community are presently forming teams to participate in this year’s 14th annual South Shore Walk to End Alzheimer’s. It will take place from 9 to 11 a.m., Oct. 15, at United Methodist Church of Sun City Center, 1971 Haverford Place. ABC Action News anchor Jamison Uhler will emcee the program. 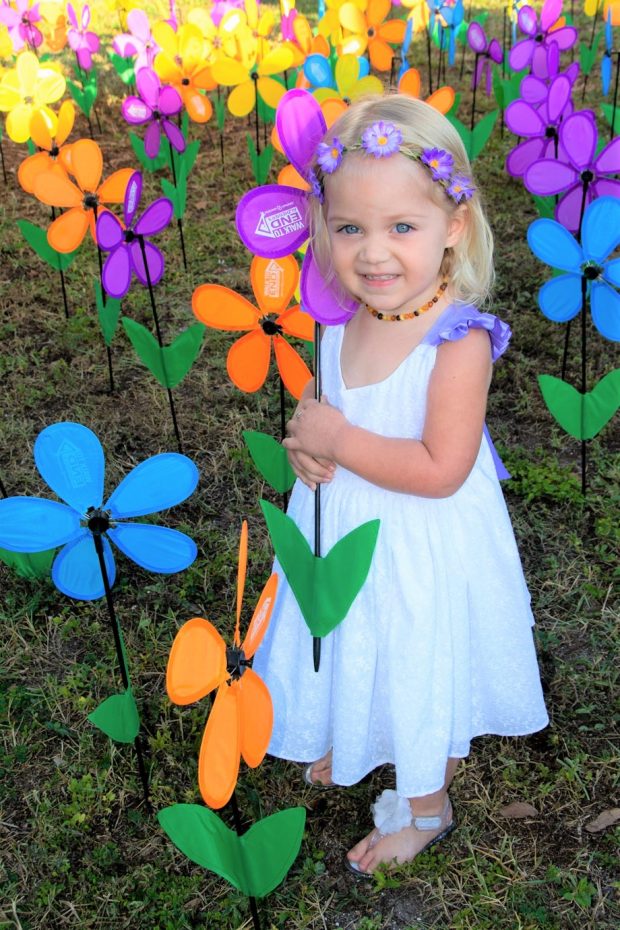 COURTESY PHOTO
Connie Magnolia Burnes stands inside last year’s South Shore Walk to End Alzheimer’s Promise Garden, holding a purple Promise Flower, which means she lost someone to the disease. Participants are asked to choose a flower with a color representing their reason for walking.

A number of public fundraising events have also been scheduled prior to it in connection to the event, which supports the Alzheimer’s Association ongoing research to treat, prevent and, ultimately, find a cure.
“I walk every year to honor my parents,” said event co-chairwoman Ellen Kleinschmidt, team captain of last year’s top fundraising team, Hot Diggity Dogs. “My 90-year-old mother was diagnosed 12 years ago, and my 92-year-old father takes care of her. They’ve been married 70 years, and he will continue to provide her care as long as he physically can. It’s difficult for our family to watch her decline and see the effect it has on my dad, due to stress of being a full-time caregiver. He’s my hero. 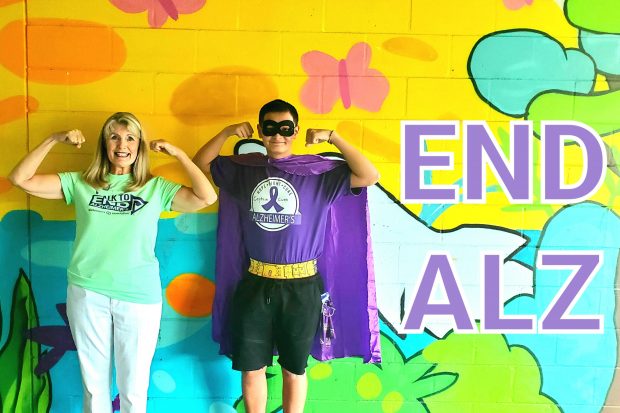 COURTESY PHOTO
South Shore Walk to End Alzheimer’s founder Connie Lesko stands beside Dylan Bramble, aka Captain Cure, at the 2021 South Shore Walk to End Alzheimer’s. Now 14, Dylan has worn his Captain Cure costume since he was 8 to honor three family members diagnosed with the disease, two of whom have since died. The Brambles cared for them over a period of six years 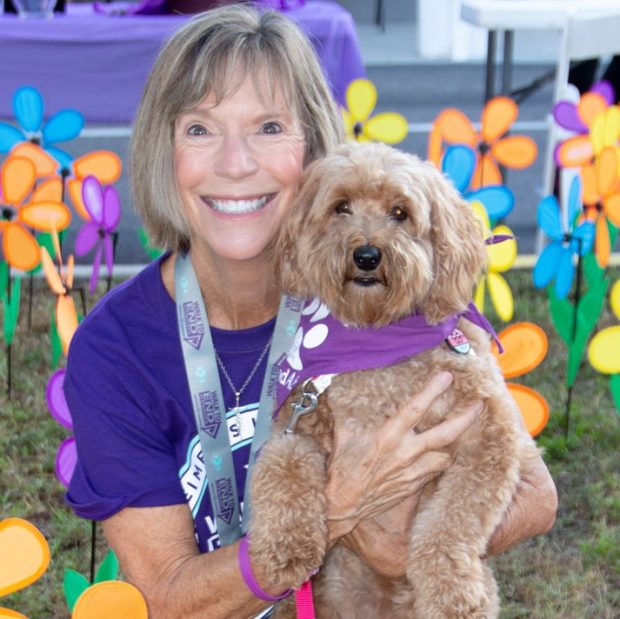 COURTESY PHOTO
Ruskin resident Ellen Kleinschmidt, chairwoman of this year’s South Shore Walk to End Alzheimer’s and captain of Team Hot Diggity Dog, is seen here with her Golden doodle, Daisy, at last year’s walk. If you’re a dog lover, you can join her team and walk with your pet during the event. Visit www.alz.org/southshore/. 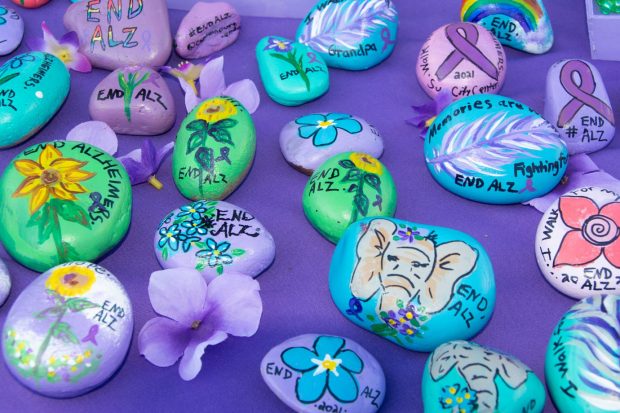 COURTESY PHOTO
Team Purple Power will be giving these hand-painted rocks to anyone making a donation in any amount at its table at the South Shore Walk to End Alzheimer’s Oct.

“I also walk for a future without Alzheimer’s for my children and granddaughters,” Kleinschmidt added, and selfishly for myself, as I carry the APOE4 gene, which may make my brain more likely to develop Alzheimer’s disease.
“If you’re not affected by Alzheimer’s or related dementias now, chances are you will be,” she said.
There are many ways to provide support.
Everyone who participates in some way makes a difference, Kleinschmidt said. It can be through raising money by walking in the event, attending one or more of the pre-Walk fundraisers or donating to the cause directly at www.alz.org/southshore/.
On this site, you’ll find teams representing residential communities like Freedom Plaza, Kings Point and Aston Gardens, and others who have a personal stake in the cause, including Team Purple Power with Captain Cure, Methodists on the Move, Hot Diggity Dogs, Tu Tu Believers and Stephanie’s Darlings. Even HCA Florida South Shore Hospital has a Dream Team. Currently 20 teams have signed up, and there’s still plenty of time to join one or add your own.
Church liaison Jane Keegan, who is working with Kleinschmidt on the logistics of the walk, joins the Methodists on the Move team every year. 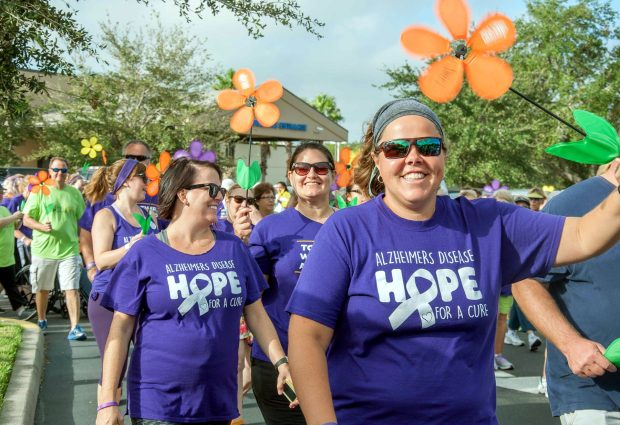 SHARON RUIBAL PHOTO
The two-mile loop known as the South Shore Walk to End Alzheimer’s will be Oct. 15 at the United Methodist Church of Sun City Center, 1971 Haverford Place. Registration is from 7 to 8:30 a.m., the ceremony at 9 and the walk follows.

“My mother was diagnosed with Alzheimer’s 13 years ago, and my father had dementia. They hid her symptoms as best they could,” Keegan said. “She died six years later. By the end, she had lost her appetite completely and didn’t want to see or recognize anyone. My dad died six weeks after she did.
“Thirteen years ago, I was ashamed for people to know my mother had Alzheimer’s,” Keegan said, noting back then it was stigmatized. “When I first joined the walk and made a donation, I wouldn’t accept the T-shirt, let alone wear it. I’m not proud of that, but I know better now and understand there is help available. I’m glad I’m able to do something.”
Area businesses are invited to become sponsors and have a table at the event. Levels range from $50 to $1,000. Thus far, Aston Gardens at the Courtyards is a Guardian Sponsor; Care Access is an Avenger Sponsor; Freedom Plaza and FirstLight Home Care Southern Hillsborough, Sidekick Sponsors; and Edward Jones, a National Sponsor. 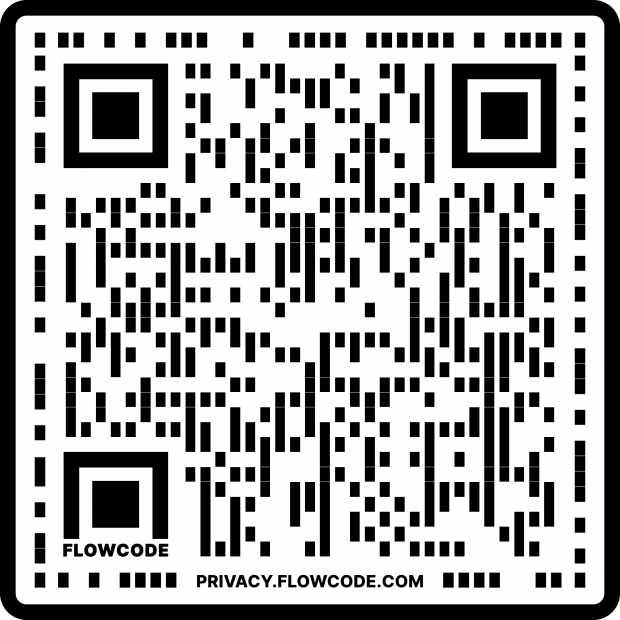 By scanning this QR code, you can go directly to the South Shore Walk to End Alzheimer’s website page, where all of this year’s teams are listed. You can join one, start your own or make a donation.

So in whatever way you choose, open your heart and open your wallet in support of this urgent cause.
If you’d like to form a team, join someone else’s team, become a sponsor or simply make a tax-deductible donation, call Kim Bauer at 813-344-9213 or Jane Keegan at 813-380-4788 or visit www.alz.org/southshore/.

Harriet Garbelman may be gone, but her bloom will never fade