Keynote speaker Dennis Jones struggled at times to hold back tears as he recounted the events and lives lost in the Sept. 11 terrorist attacks that brought a nation to its knees.
“Millions of people beginning their workday just like any other day, with no thought of what was to come,” said Jones, chief of Hillsborough County Fire Rescue, at the Patriot Day remembrance held Sept. 9 at Hillsborough County Veterans Memorial Park and Rear Admiral LeRoy Collins Jr. Veterans Museum in Tampa. “In just two and a half hours that morning, our lives and our world were changed forever.” 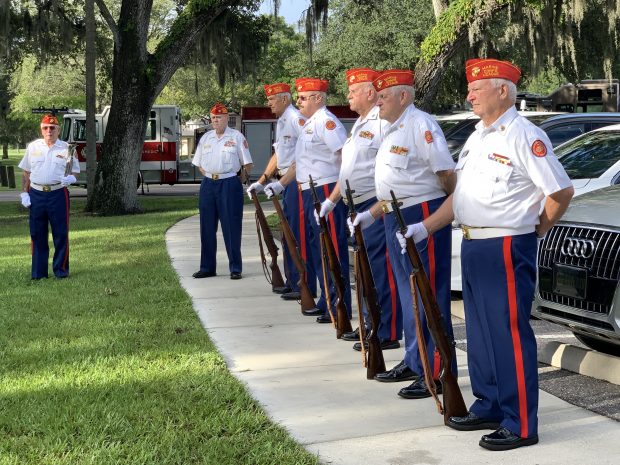 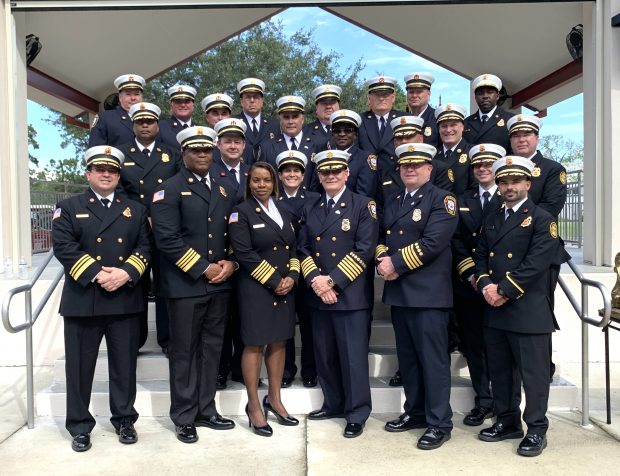 The unifying theme for the 21st anniversary remembrance of the Sept. 11, 2001, terrorist attacks, “Always in our Memory,” reflects as well the comments of Jones and other speakers, who focused greatly on two trains of thought. They recounted how no one can forget where they were that fateful day and how the nation came together as one to face its darkest hours.
So it was for Joe Eletto, chair of the military affairs committee for the Greater Riverview Chamber of Commerce, who brought committee members to the park for their monthly meeting and to partake in the Patriot Day remembrance.
When the Japanese attacked Pearl Harbor on Dec. 7, 1941, “I wasn’t alive yet,” Eletto said. “But for me, and for anybody who was of any age that they can remember, 9/11 was the worst thing that has happened to this nation. And yet it was good to see how it really, really united us all.” 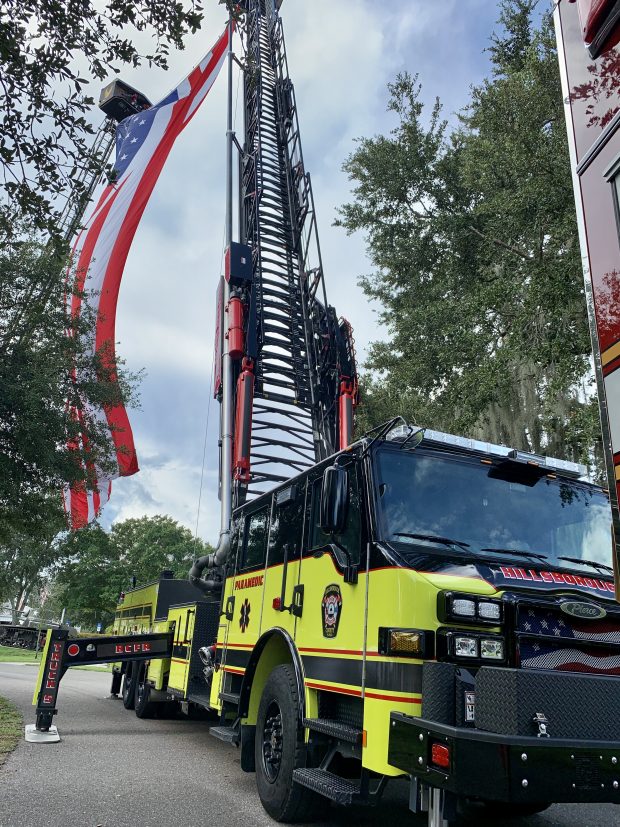 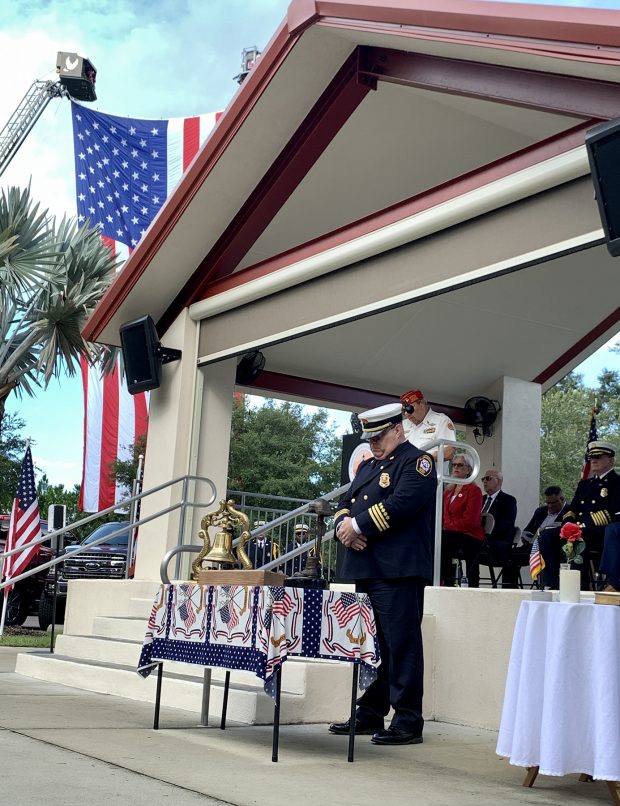 And that’s a key point for today’s fractured times, “primarily, politically speaking,” Eletto said.
“We’ve just become so disjointed,” said Eletto, who served in both the U.S. Army and U.S. Navy. “By bringing this remembrance of what happened 21 years ago, and how we were united through a very tragic situation, hopefully, people will think about it and come together as a nation. That’s the key.”
As for where he learned of the terrorist attacks, Eletto said he was burying his father-in-law, a 24-year U.S. Air Force veteran, at the Sun City Center Funeral Home.
Hillsborough County Commissioner Stacy White, whose District 4 seat includes Riverview and south Hillsborough County, said he was a young pharmacist at work, with a toddler and an expectant wife at home.
“I remember being very scared,” White said, but with the “peace of mind that we had fine men and women” on the front lines “to keep this nation safe.”
“Patriot Day continues that solemn remembrance and keeps our vow to never forget the people we lost that day,” White said. “I often just wish we could continue to experience the cohesiveness that we felt in the weeks, months and years after 9/11.” 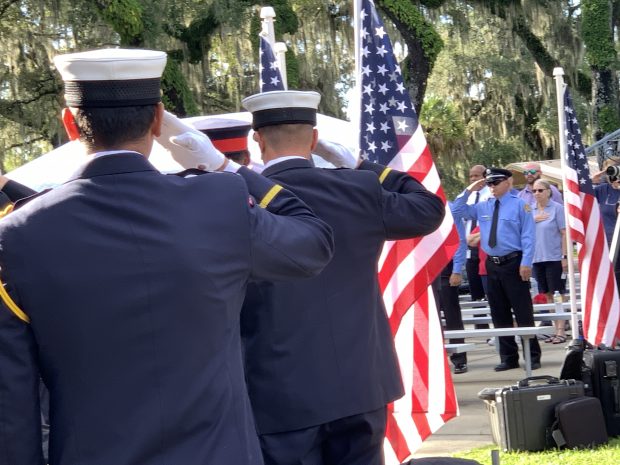 In paying tribute to first responders and military personnel, “who put their lives on the line to help others,” commissioner Gwen Myers, District 3, said responses to the attacks “demonstrated that we are capable of coming together, and putting our resources and our energy together for the common good.”
Kimberly Overman, countywide commissioner, opened her remarks reflecting on the nearly 3,000 people who died Sept. 11 at the World Trade Center and the Pentagon, and in an open field in Somerset County, Pa., after the heroic efforts of passengers who rushed the cockpit to confront their hijackers. Also noted were the soldiers who died in Operation Enduring Freedom and the tens of thousands of people over the past 21 years who are battling or have succumbed to cancers and other illnesses related to the attacks. The more than 6,000 people injured that fateful day in our nation were remembered as well. Overman said she spent the day, Sept. 11, 2001, calling the family members of financial professionals she worked with, who were working at the World Trade Center during the attacks. 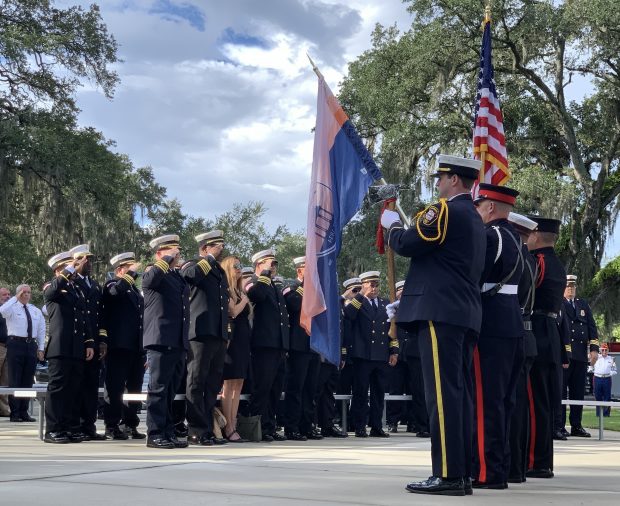 “We owe it to ourselves, to our nation, to the heroes who lost their lives that day and to those who have lost their lives since that day, to always pay attention to those who stand up and serve our nation well,” Overman said. “We will never forget.”
So it was for Chief Jones, who in his keynote remarks noted the last time he saw his friend, Richard Muldowney, a New York City firefighter who lost his life saving others in the terrorist attacks. Jones met up with Muldowney at a memorial service in June 2001 for the five-alarm “Father’s Day Fire” at a hardware store in Astoria, N.Y., which claimed the lives of three FDNY members, Lt. John Downing and firefighters Brian Fahey and Harry Ford.
“That trip in June would be the last time I saw Richie,” Jones said, who noted that upon returning to visit Ground Zero and the 9/11 Memorial Museum, “it had a significant personal impact on me.”
“It can’t fully be explained, but it’s deeply moving and extremely emotional,” Jones said. “Today we’re honored to have with us Richie’s brother, Hillsborough County Fire Rescue Battalion Chief Brian Muldowney and other members of the Muldowney family.”
For his part, Brian Muldowney participated in the bell ceremony that symbolizes the last call of a devoted soul in the brave pursuit of duty. Also in view at the Patriot Day remembrance, a larger-than-life American flag and a steel beam from the World Trade Center, which is on display throughout the year at the Rear Admiral LeRoy Collins Jr. Veterans Museum.
In the aftermath of 9/11, “our country was united in a way that I don’t recall seeing in my lifetime,” Jones said. “American flags were flying proudly everywhere and places of worship were full. What was intended to crush the American spirit only made it stronger.”
The veterans memorial park and museum is in Tampa at 3602 U.S. Highway 301 North. Call 813-635-8316 for information.

Need a caterer? Cibo Delizioso is ready to serve