Franchisee Matthew Wortman has a new restaurant on his hands, extending his reach as he brings McAlister’s Deli to the Gibsonton commercial center in the greater Riverview community.
During a soft opening of McAlister’s last week, at 9360 Theater Drive, Wortman welcomed guests as he talked about his latest offering in the dining, shopping and entertainment district, where McAlister’s sits between the Cracker Barrel Old Country Store restaurant and a newly opening Woodie’s Wash Shack.
“We’re just a typical deli,” Wortman said. “We freshly slice our meat on a daily basis, and the salads are made fresh daily with good quality ingredients.”
It’s Wortman’s second franchise in the Gibsonton complex. He opened Zaxby’s in 2017 as one of the first dining alternatives for moviegoers to what was then the Goodrich Riverview 14 GDX cineplex. Now known as AMC Riverview 14, the new owners did not reopen the restaurant inside the cineplex.
As the center grew with yet another anchor, the Extended Stay America Tampa-Gibsonton-Riverview, so, too, did Wortman’s desire to bring another dining alternative to the Gibsonton area.
“The unique thing we do is with our spuds,” Wortman said. “We take two potatoes and cut off the edges on each side and put it together so you have one massive potato [to stuff]. One spud is two basically. It’s a full meal and they’re delicious.”
Spud takers have many options, including Black Angus Roast Beef Spud, Veggie Spud, Chipotle Chicken and Bacon Spud, Justaspud and Spud Max, which involves ham, turkey and bacon. There’s both a kid’s menu and a “choose 2” option for half-order sandwiches, salads, spuds, soup and shareables. On the menu also are desserts and McAlister Famous Sweet Tea.
Wortman called the center’s growth “phenomenal,” noting in particular that the movie “brings in a ton of traffic.” Shortly after the center opened, Zaxby’s, “a fan favorite for chicken fingers, wings and salads” opened, along with a combined Dunkin’ Donuts and Baskin-Robbins. The center today includes a brew pub, Dollar Tree, NY Nails, Cricket Wireless and Rosemary Grill, featuring sandwiches, platters, salads, wings and seafood.
Too many restaurants? No such thing, according to Wortman. Having multiple restaurants in the center is “one hundred percent” a good thing, he said. “It drives more traffic and brings more people in, and now they know McAlister’s is here.”
Wortman’s experience as a franchisee dates back to the Zaxby’s restaurant in Valrico on State Road 60, which he helped his father run. In recent years he got an even deeper education as a business owner, navigating through the tough times of pandemic protocols, hiring difficulties and inflationary pressures.
“Just seeing the struggle of people, it’s tough out there,” Wortman said. Having drive-through window dining during the pandemic was a blessing, he added, as “we had a convenient option for people.” 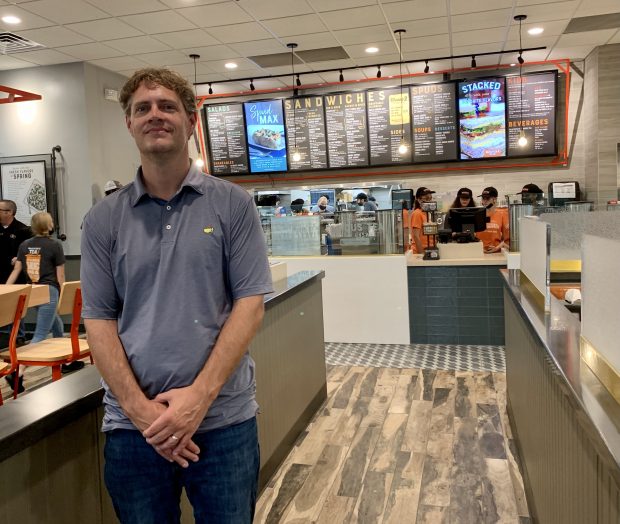 Matthew Wortman inside his newly opened McAlister’s Deli in Gibsonton.

Hiring, which Wortman said always is ongoing,” is a tougher issue, and especially so for assistant managers. “Most of the high school kids seem to really want to work,” he added, “and the young adults who have day shifts, they’re excited to work.”
McAlister said he looks to hire workers who want to learn and be part of a team providing good food. “We know we’re not anyone’s last [career] stop,” Wortman said, “but we want to train them up, give them good life skills and prepare them for their next job, no matter what it is.”
As for community outreach, Wortman said he is open to working with schools for fundraisers and recently hosted a Teacher’s Appreciation Day for Gibsonton Elementary School educators. “They’re a great group,” he said.
When asked how McAlister’s would hold up against the slew of delicatessens in New York, Wortman didn’t skip a beat.
“That’s some tough competition, but I think we’ll be very comparable,” Wortman said. “If you did a blind taste test and put our food up against theirs, I think we’ll stand up. Give us a try.”