Sumner opened its home portion of the schedule on Friday, Sept. 2, winning a 20-0 decision that ended at the six minute mark of the first quarter. The Stingrays head back out onto the road to play at Jefferson HS on Friday, Sept. 9, at 7:30 p.m.
The Stingrays hoped to have a bright sunny day to open a season of high expectations as they welcomed the Chamberlain Chiefs to the Tank; however, mother nature had a different plan. The game was delayed 10 minutes to 7:40 p.m. to give a little extra time for the drizzle to clear but it never did, only getting to more of a harder drizzle as time went by. Sumner won the toss and took the field on offense, instead of deferring to the defense as they commonly do, and went down the field to score the first TD of the night. The drive was capped by a 54-yard pass play from junior QB Greg Smith to senior wideout Eelijah Singleton, his first Sumner TD. The Stingray defense got on the scoreboard with an interception that went for a pick-6 by senior safety Kylen Webb. The Sumner offense would score the final TD of the short night on a 5-yard dive by QB Smith before the game would be called because of weather. 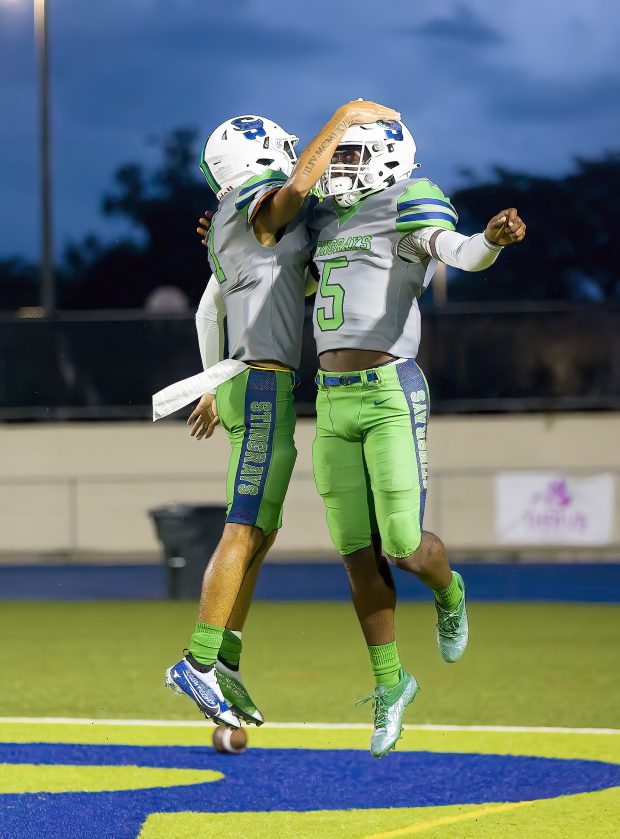 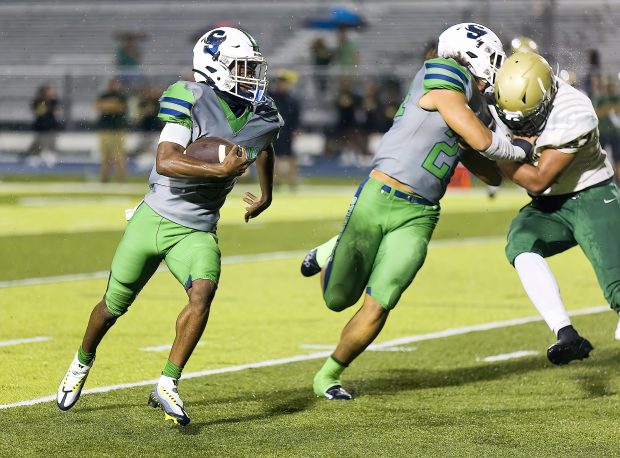 A Stingray player finds the edge as blocker Keoni Denny ties up a Chamberlain player.

As the Chiefs took the field on offense, the sky was flickering with lightning. The game officials were called off the field at the six minute mark to huddle with the school AD regarding the lightning, as it appeared to be moving toward the stadium. It was determined that the lightning was inside a distance that required the teams and fans to take shelter. A 20-minute break was declared. The weather was reevaluated at the end of the time-frame and officials from both schools determined that the teams would not retake the field, and the game was called. It was clear after only six minutes of play that Chamberlain, which only carries 24 players on its varsity roster and will not field a JV team this season, was going to be challenged to stay with Sumner’s high powered offense and stout defense. The Chief’s were willing to give it a shot, but mother nature wouldn’t allow it. The Stingrays walked away with the victory and are now 2-0 to start the season as they prepare to play a string of games against Tampa High Schools that they have not seen before.
The Stingrays are looking to continue their winning ways on Friday at Jefferson. 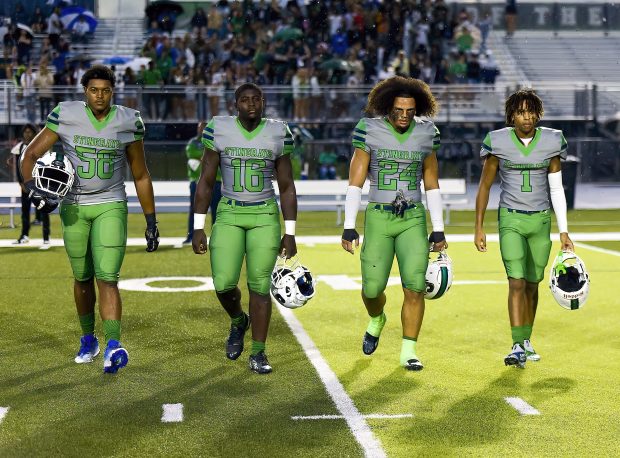