Just when it seems our lives are everything we dreamed of, life has a way of throwing us a serious curve ball.
In February 2021, Misty Steffen, 48, was on the way to her dream job at HCA Florida South Shore Hospital, working as acting chief nursing officer on the hospital’s all-women leadership team. She had recently moved to Florida, was happily married and had a grown daughter at Galen University studying nursing.
Other than being very fatigued by the number of hours she was putting in to prepare for the role of CNO, she was living the life she had always imagined. 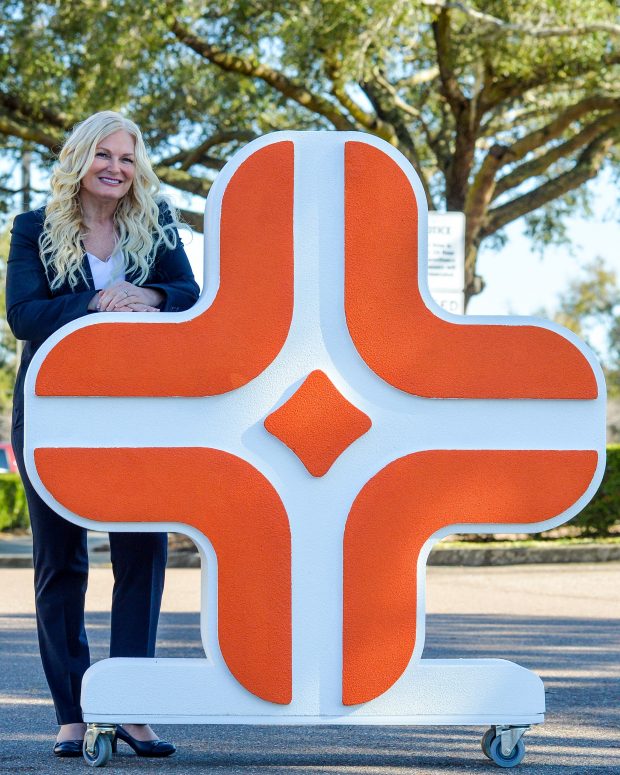 SOUTH SHORE HOSPITAL PHOTO
Misty Steffen is seen here during HCA Florida’s rebranding of South Bay Hospital to South Shore Hospital in February of 2021. At the time, she was unaware she would be diagnosed 13 months later with MDA, a rare, highly aggressive form of blood cancer of the bone marrow.

“Misty joined South Shore Hospital as an interim CNO who was enrolled in HCA’s Executive Development Program at the time,” said hospital CEO Sheldon Barr. “We had an instant connection and strong commitment to our mission, which is ‘Above all else, we are committed to the care and improvement of human life.’”
By early March 2021, Steffen had become South Shore Hospital’s chief nursing officer. As such, she was responsible for retaining nurses, hiring them, providing the tools and resources they needed and creating councils for them to have a voice. She listened to the concerns, thoughts and ideas of her staff and other hospital caregivers, as well.
“As CNO, Misty ministered not only to nurses but also to all of our healthcare personnel because, at the end of the day, regardless of your role in our hospital, we are all caregivers,” Barr said. “She solicited feedback, challenged the status quo and provided a culture where no solution was off the table.”
During the pandemic, when hospital employees had to work long hours, Steffen and Barr joined the nursing staff to relieve some of the weight the nurses were carrying and support them through an emotionally trying time.
“I was very invested in the well-being of everyone in the hospital,” Steffen said.
The curve ball is thrown
By September 2021, Steffen was tired all the time. She chalked it up to working long hours or to menopause. Hormone replacement therapy was started but didn’t help.
Six months later, in early March 2022, Steffen became overwhelmingly exhausted. She kept vomiting, her bones ached and she felt like she had a wicked case of the flu.
“After talking with Sheldon, I picked one of the two doctors she found for me to see for routine labs,” Steffen said. “When the results came back, I was referred to a hematologist, and thanks to a colleague, I got in the same day.”
A bone marrow biopsy was ordered and done immediately at South Shore Hospital. It was such complex testing, it took 10 to 14 days for the results to come back, and Steffen kept working.
“Love made me do it,” she said. 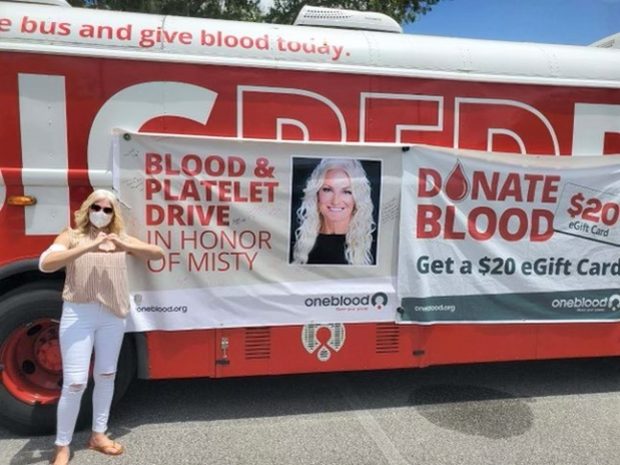 SOUTH SHORE HOSPITAL PHOTO
Through Misty Steffen’s clinical trial, she received 14 units of blood and 30 units of platelets, thanks to the generosity of others. Regardless of your age, you can help patients with life-threatening blood disorders who require a blood stem-cell transplant by donating blood at South Shore Hospital between 11 a.m. and 4 p.m. Sept. 20.

On March 21, Steffen ended her work day and felt so bad, she thought she was going to pass out. She went to the ER and learned her hemoglobin was 6.4, when it should have been somewhere between 12 and 16.
She was admitted and treated with multiple blood products, got another biopsy, and when the results came back on March 24, she learned she had MDS, a rare, aggressive blood cancer of the bone marrow.
When Steffen arrived at Moffitt Cancer Center on April 4, a resident physician reviewed her biopsy and told her the prognosis was “very poor.”
“My heart was beating out of my chest,” she said. “I wanted to leave the hospital, get out my passport and travel.”
Shortly after, Moffitt Cancer Center’s Dr. David Sallman took over her care. He couldn’t start treatment until the end of May, however, due to a hold the FDA had on a research drug he wanted to use.
“I suffered fever and body aches until I could get the experimental drug,” she said. “Chemotherapy alone cannot cure this form of cancer.”
Treatment finally begins
On May 23, Steffen started chemo and a blind trial that included either the research drug or a placebo. Since then, she’s had 21 doses of chemo and 14 infusions of either the drug or placebo.
“I’m as close to remission as I’m going to get, however, it will not last, so the only potential cure is a bone marrow transplant,” she said. “I’ll be admitted to Moffitt Sept. 14 and get five to six days of intense chemo to wipe out my remaining immune system, one to two days of rest and the transplant on Sept. 22.”
Steffen said a 24-year-old man from outside the United States donated his stem cells for the bone marrow transplant. Neither knows anything else about the other. In two years, if the donor agrees, they can share contact information.
“I already love him, so I really hope I get to meet him,” Steffen said. “Without a doubt, his selfless act is saving my life.”
By the time the entire process is complete, she will have had 13 bone marrow biopsies. She will be followed for two years, and if there’s no rejection, she’ll be considered cured. Even so, she’ll need to have annual screenings for the rest of her life.
Bone marrow transplants have a 50% cure rate.
“Transplant is not easy,” Steffen said. “I’ll be in the hospital for 30 days, and once I’m released, I’ll have 70 days of follow-up. Over time, transplanted bone marrow engraftment will happen, and when my body accepts it, my own bone marrow will produce red and white bloods cells and platelets and my immune system will be rebuilt cancer free. I’ll no longer be dependent on blood products.”
Her friends and colleagues are, of course, praying and rooting for her.
“As Misty’s friend, there is nowhere I’d rather be than by her side as she prepares to fight for her life,” Barr said. “She is fierce, she is strong, she is a warrior who carries herself with grace and has the largest heart of anyone I know. It’s an honor to be chosen to share this journey with her and her family.
“Misty is an inspiration to us all and during her transplant, we will again choose to [fight] together – this time it will be on a personal level as she fights for her life,” Barr continued. “That being said, her HCA Florida South Shore family will stand strong and proud in front of, beside and behind her as she blazes yet another trail and wins the fight against MDS.”
Swab your cheek. Save a life. 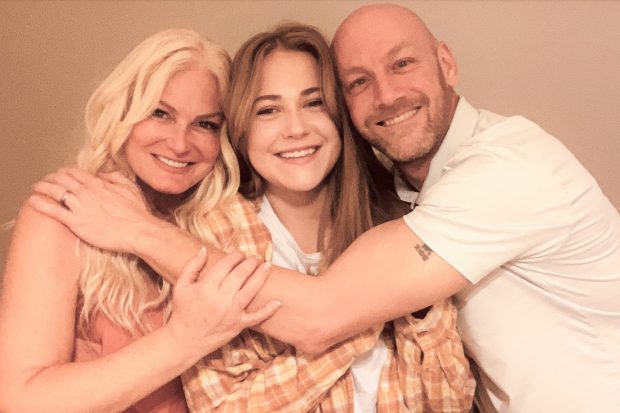 STEFFEN FAMILY PHOTO
Misty Steffen, left, South Shore Hospital’s former chief nursing officer, is shown with her daughter Samantha and husband Brett. Steffen will undergo a bone marrow transplant, thanks to an unknown donor who gave his stem cells to help save her life.

On Sept. 20, the HCA West Florida Division will host a Be the Match registry drive in the South Shore Café at South Shore Hospital, 4016 State Road 674, Sun City Center from 6:30 a.m. to 7 p.m.
A simple self-swab of both cheeks may help save the life of patients with life-threatening blood disorders like MDS, leukemia, lymphoma and sickle cell who require a blood stem-cell transplant.
HCA Florida is helping Be The Match (nonprofit organization) grow its donor registry to help more patients find life-saving donors. If you’re between the ages of 18 and 40 and want to commit to a patient in need, join our in-person registry drive, pick up swabs for family members or visit https//my.BeTheMatch.org to have the swabs to your home.
The Blood Bus will also be on hand from 11 a.m. to 4 p.m. on Sept. 20. Blood donations are also critical donations for these patients, and there is no age limit. Through Steffen’s clinical trial, she received 14 units of blood and 30 units of platelets.
“Without these sweet donors, I never could have gotten this far,” Steffen said.
For more information, email alissa.kostyk@hcahealthcare.com/.