Welcome to high school football 2022!
The top three South Shore gridiron squads routed opponents in the season’s opening games last Friday night. Sumner outscored Bloomingdale 42-32 and is, at this point, the top ranking team among the five in the South Shore. The East Bay Indians and the Riverview Sharks both rolled to impressive victories to match Sumner at 1-0 records in the early going.
Lennard High and Spoto High sustained losses and are destined to struggle for wins throughout their schedules. Lennard was shutout 49-0 by the Hillsborough Terriers of Head Coach Earl Garcia Jr. Spoto showed a great deal of offense but could not stop or slow the Robinson Knights. The Spartans fell to 0-1 in the season opener, losing 61-32. 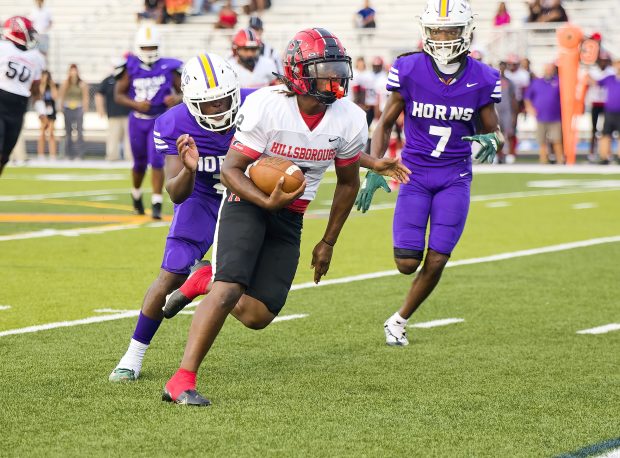 Francis Fedor Photos
Hillsborough receiver gets beyond Lennard defenders to pick up a first down early in the action.

This Friday evening at 7:30 p.m., Sumner hosts Chamberlain, a 39-0 victim of Durant last week. The Riverview Sharks are heavily favored to capture win number two in their home opener under new Head Coach Anthony Rodriguez and a ravenous offense. Spoto’s Spartans again are heavy underdogs in a visit to Dover to tackle the Strawberry Crest Chargers who toppled King High 28-7 last week. Lennard hopes to improve every week and takes on another Tampa foe, the 1-0 Robinson Knights in the Knights’ home opener. East Bay sits idle this Friday, awaiting its home opener with Sickles Gryphons Sept. 9.
Last Friday, East Bay Head Coach Mike Gottman displayed various approaches to the end zone, trouncing Middleton 41-0. Indians’ quarterback Nathan Carter overcame an early fumble to hit five of seven passes for the game, including a 64-yard bomb to Aiden Showers and a 24-yard scoring throw to Armando Becerrill. The Indians’ Jaelin Sneed provided plenty of running back support, rambling for 123 yards on the ground with a pair of TDs. Senior Vincent Ketchup picked up 75 yards to complement Sneed. Senior linebacker Christian Stewart had a big night defensively. Stewart tallied two TDs—an early “pick 6” for 74 yards and an 85 yard jaunt with a fumble recovery to the Middleton end zone in the third quarter.
The East Bay defense totally dominated the Middleton Tigers. The Indians held Middleton to 52 total yards, 76 yards passing with six of 20 completions and minus 24 yards on 22 rush attempts. East Bay’s Emmanuel White registered six tackles, one sack and two and one-half TFLs (tackles for losses). 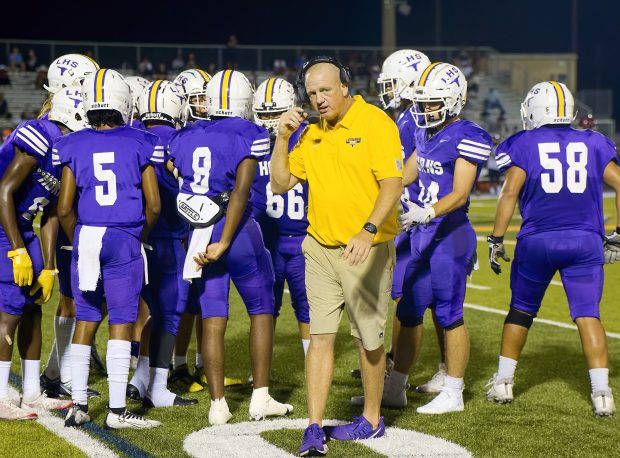 Riverview put it together under its enthusiastic new Head Coach Tony Rodriguez to wallop the Brandon Eagles 45-0. This week could be more Sharks domination as Freedom High visits Riverview after suffering a 73-8 demolishing at the hands of Alonso High last week.
The Sharks utilized a balanced attacked on offense and defense to dispose of everybody’s whipping boy—the hapless Brandon Eagles. New junior transfer Riverview quarterback Aaron Turner fit right in Coach Rodrigeuz’ offense. Turner completed an efficient five of seven passes for 114 yards. The primary receiver was Sharks stalwart Harry Hensley. Hensley grabbed five aeriels for 114 yards and two TDs.
Meanwhile junior Sharks running back Rico Shoats, a stocky 5-11, 215 pounds, ran behind the Riverview offensive line for 143 yards, tallying four rushing touchdowns. Alloysius Tyson showed some good moves as a punt returner, taking three back for 82 yards and good field position.
Brandon was stymied all night by a trio of spark plugs on the Riverview defensive line. Senior Hayes Thomas, 5-11 and 215 pounds, was in on 12 tackles. Niko Gnann, at 5-10, 210 pounds, participated in 13 tackles. Junior Adrian Zalduondo, 5-8 200 pounds, contributed on six tackles.
Lennard was the only South Shore team to open at home. The Longhorns succumbed to heavy favorite Hillsborough High 49-0. The visitors from Tampa were superior to Lennard in many ways­—experience, talent and execution. Horns Head Coach Matt Kitchie has a massive job making Lennard competitive this season as the Horns will be underdogs in most games. The trip to play Robinson this Friday could possibly offer Lennard a chance to get its offense moving. Of course, if Lennard can score some points, the Horns defense is faced with the task of limiting the Knights offense, which scored 61 points in a near-doubling of Spoto last week.
Lennard replaced a three-year starting quarterback with Tyler Russell. Russell and the rest of Lennard’s offense, as the defense, struggled all night versus Hillsborough. The new QB hit seven of 10 passes for 72 Yards. Russell also led Lennard in rushing, picking up 43 yards on 10 runs. As a team, the Longhorns added on 74 yards on the ground rushing. A total pass and run offense of 146 yards won’t get you many victories unless you have a staunch, lockdown defense which Lennard has yet to develop.
Spoto opened away at Robinson High in Tampa. The Spartans, under new Head Coach Keith Chattin, actually exhibited a decent offense. Problem was that Spoto could not handle the Robinson offense, which amassed a 61-32 victory.
The challenge this Friday is to have the fleet-footed runners and receivers of the Spartans match or excede their output of the loss to Robinson.
Spartan senior Corri Ponder ran for 118 yards rushing in the defeat. Ponder’s longest jaunt was for 65 yards. He tallied a pair of touchdowns. Another promising offensive output came from soph quarterback Z’ovey Cotton who threw 12 times and completed three for 59 yards. Soph Isaiah Turner compiled 49 receiving yards, one TD, and piled up 108 yards, returning three of Robinson’s kick-offs. Senior Jaylen Oliver also scampered into the end zone for Spoto.
Defensively, Spoto was led by senior Takoki Brown, in on seven tackles, and sophomore Christopher Harris, in on six tackles.