Pat Simmons combines his spiritual journey and passion to serve, advancing both Bikes For Christ and the Nonprofit Leadership Roundtable, supported by many organizations, including the Riverview and Plant City chambers of commerce.
Simmons, who hails from Dover, founded Bikes for Christ following a mission trip to Nicaragua in June 2015, where he said he witnessed third-world country poverty first-hand. Upon his return to the states, he was determined to do whatever he could “to make a difference in my own community.” That led to working with organizations that serve the poor and homeless, where Simmons said he learned transportation is an essential need.
In turn, the roundtable is “a place where nonprofits can come for education and to share what each one of us is trying to accomplish,” said Simmons, who founded Bikes For Christ in 2016. “Networking is the key to the success of any business, and that includes any nonprofit business as well.”
Through virtual meetings, the roundtable extends its reach countywide, with featured speakers selected to help nonprofit leaders grow their efforts with positive results.
In August, for example, Anant Patel talked about FrontStream, whose products help charities and socially responsible corporations raise and process funds. In July, Brandon Pistole represented All American Classics, a family-run business that for 25 years has been helping organizations raise money with handcrafted sports and Hollywood memorabilia.
The roundtable serves also as a vehicle to promote nonprofit efforts and events, including the fourth annual Tampa Social presented by SOF Missions, a nonprofit that aims to end veteran suicide. The venue for the Oct. 8 event is the Centre Club in Tampa.

Tanya Doran, executive director of the Greater Riverview Chamber of Commerce, said she supports Simmons and his work, finding that in addition to his personal experience launching and building a worthy nonprofit, she loves as well “the way he shares information and grants opportunities.”
The Nonprofit Roundtable traces its roots to a Plant City chamber initiative, supported by Christine Miller, the chamber’s president and chief executive, who offered the group meeting space once a month. The roundtable convenes now in monthly virtual meetings. 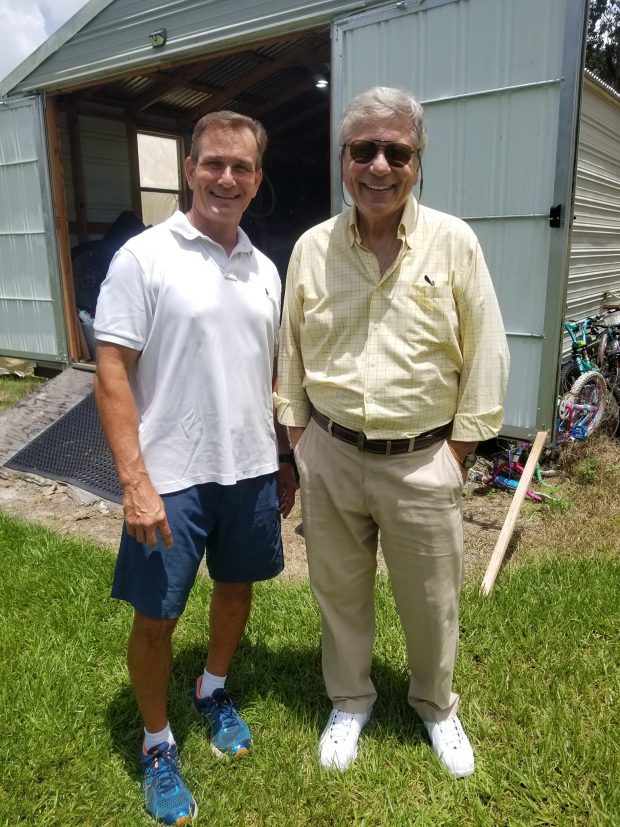 Pat Simmons is with Bill Murphy from Spectrum Bay News 9, upon being interviewed for Simmons’ receipt this year of the station’s Everyday Hero award, given to folks who make a difference volunteering, donating and giving back to the community.

“The Plant City chamber remains a steadfast supporter of the roundtable and its growth, and we’ve been reaching out to other chambers as well,” Simmons said, noting in particular his outreach to the SouthShore, Valrico/FishHawk and South Tampa chambers.
With or without a chamber membership, the roundtable is open to all nonprofits and interested parties, Simmons said, in keeping with the group’s overall mission.
“The more that we can bring to the virtual table, the more good we can do in our community,” Simmons said. “Throughout Hillsborough County we have a lot of different nonprofits that fill a lot of different niches, so when the time comes for us to refer somebody to an organization that specializes in something we do not, we know where to go to get them the help they need.”
For his part, Simmons said he had been seeking ways to combine his passion for bicycling with a cause that deepened his drive to make a difference in people’s lives. That led to the March 2016 founding of Bikes for Christ, and social media postings on Craigslist and Facebook, seeking bicycles to refurbish and donate.
With donations now streaming in from four counties, Bikes for Christ works with roughly 70 charitable and social services organizations to determine the need for transportation among clients falling on hard times, who, in turn, receive a refurbished bicycle and a Gospel of John Bible to go along with it. The four counties involved are Hillsborough, Pasco, Polk and Pinellas. 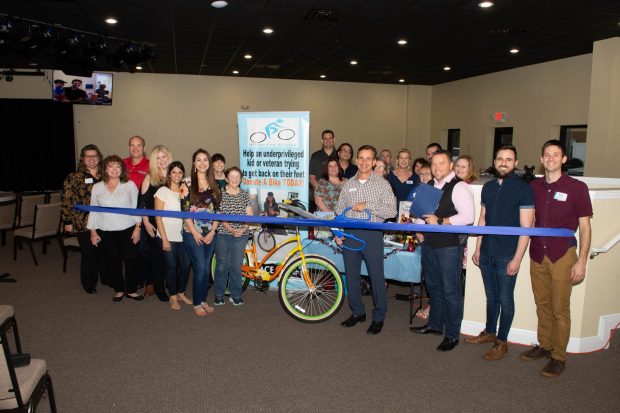 Pat Simmons gets set to cut the ribbon at the Bikes For Christ ribbon-cutting in 2019, noting the nonprofit’s membership in the Greater Riverview Chamber of Commerce.

Religious beliefs and affiliations are not assessed or required to receive Bikes for Christ aid. Indeed, non-believers are served as well, Simmons said, as it’s the fundamental purpose of doing unto others with care and compassion that drives the work.
“A bicycle can play a huge part in helping people get back on the right track,” Simmons said. “People can travel back and forth to a job. They can go to the grocery store and put food on the table.”
As for the Nonprofit Roundtable, the experience “is very eye-opening,” Simmons said. “You will expose yourself to things probably you have never seen before, never experienced before or issues that you did not know existed and that you should know about. Hopefully, like what happened with me on my mission trip to Nicaragua, your heart will be changed and you’ll want to stay involved and engaged, and maybe even start your own nonprofit, helping in some way.”
For more, visit www.Bikes4Christ.com/. To sign up for the Nonprofit Roundtable, email Simmons at pat@bikes4christ.com/. The roundtable meets the fourth Tuesday of the month at 2 p.m.