The $265 million wastewater treatment center designated for some 200 acres in south Hillsborough County is a major step forward for meeting the needs of fast-growing south Hillsborough County, according to county officials.
Toward this end, lofty plans for the upcoming One Water Campus Advanced Wastewater Treatment Facility go along with its lofty title, as its aim is twofold, to treat wastewater generated by homes and businesses and to create reclaimed water for beneficial reuse in the county’s south central service area. 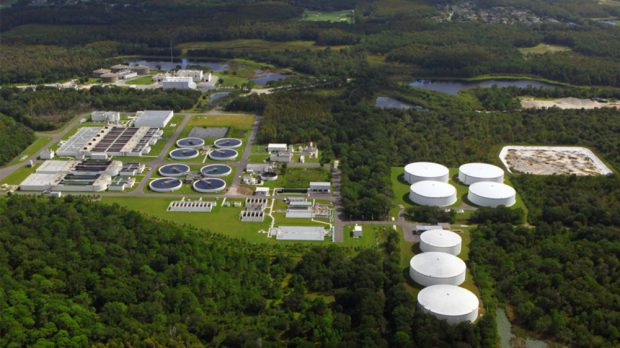 According to program manager Cheryl Robitzsch, the upcoming facility would be the fourth wastewater plant in south county, joining one in Valrico, one off Falkenburg Road and a third off S.R. 674.
Due to its size, location and layout, county officials for the fourth facility have identified a parcel of approximately 200 acres of county-owned land along the north side of Balm Picnic Road (also known as C.R. 672), near the Southeast Hillsborough County landfill west of C.R. 39.
“The project is to help with existing flows we have down there now,” said Cheryl Robitzsch, with Hillsborough County Water Resources. “Right now, our reclaimed water is used for two different purposes, to water your lawns and for industrial purposes, such as for water chillers. Industries that would normally use potable [or drinking] water, by using reclaimed water that’s been cleaned out at our wastewater plants, that helps to preserve and protect our natural resources.”
Another use for reclaimed water is to keep saltwater intrusion from moving into the coastline. “We pump reclaimed water into some recharge wells along the coast and it creates a barrier that prevents saltwater intrusion,” Robitzsch said.
In addition to saving the county “millions of dollars in land acquisition costs,” officials say using the 200-acre county-owned parcel entails other plusses, including that the location has few residential neighbors. Moreover, it’s a neighbor of other government-owned properties, including a Hillsborough County Sheriff’s Office training facility and the Southeast Hillsborough County Landfill, at 15960 C.R. 672 in Lithia.
With few employees necessary to run the upcoming facility, it is expected to have little impact on the area or traffic once construction is completed, according to county officials. Borders filled with natural vegetation are to provide natural buffers between the structure and neighboring properties and roadways as well as to help restore the agricultural land.
Moreover, officials say the community-minded facility will use state-of-the-art odor and noise controls to minimize impact to the community.
“Odor control basically involves pulling foul odor off of the plant, running it through a cylinder that takes out the odor, and pushing it back into the atmosphere after stripping it of all its stinky smells,” Robitzsch said.
Moreover, “pushing the plant further back on the 200 acres allows for some sort of buffer around the facility,” Robitzsch said. “The goal is that you never even know a wastewater plant is there.”
Construction of the $265 million facility is expected to be completed in 2027. Final siting is expected this year and follows an online opportunity for community engagement which ended earlier this month. Additional public engagement opportunities will be scheduled before the facility is designed and constructed. Construction is expected to start as early as 2024. 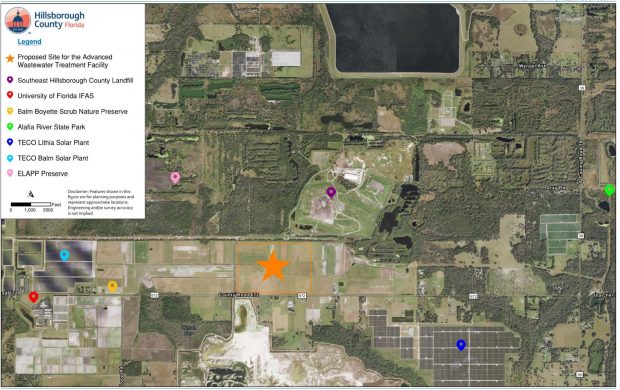 A map of the proposed site for the advanced wastewater treatment facility in south Hillsborough County.

In addition to online engagement, Robitzsch said the county will answer requests for online meetings with others, including homeowners associations.
Robitzsch is project manager for the county’s One Water program, which involves projects over the next 30 years developed through a master plan for south county improvements of water, wastewater and reclaimed water services.
“These projects are associated with the existing growth that we have right now and the existing conditions we have right now,” Robitzsch said, “to provide our customers with the best quality water, wastewater and reclaimed water.”
For more on the project, visit the Hillsborough County Engagement and Education Hub at https://publicinput.com/hub/1175. Contact Robitzsch at robitzschc@hillsboroughcounty.org.