Sumner High School football returned to the field on Friday night defeating rival East Bay 20-7 in a match-up of what could be two of the top teams in Hillsborough County. Sumner has high expectations entering their third season of what has been a very strong football program. 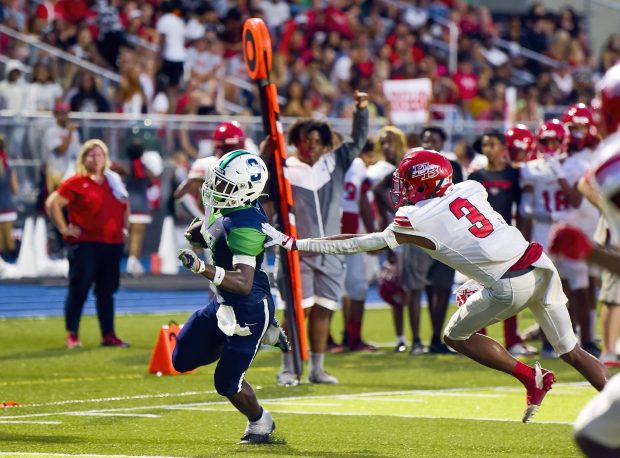 Stingray Devin Spencer gets beyond the reach of East Bay Indian Vincent Ketchup on his way to a Sumner touchdown. 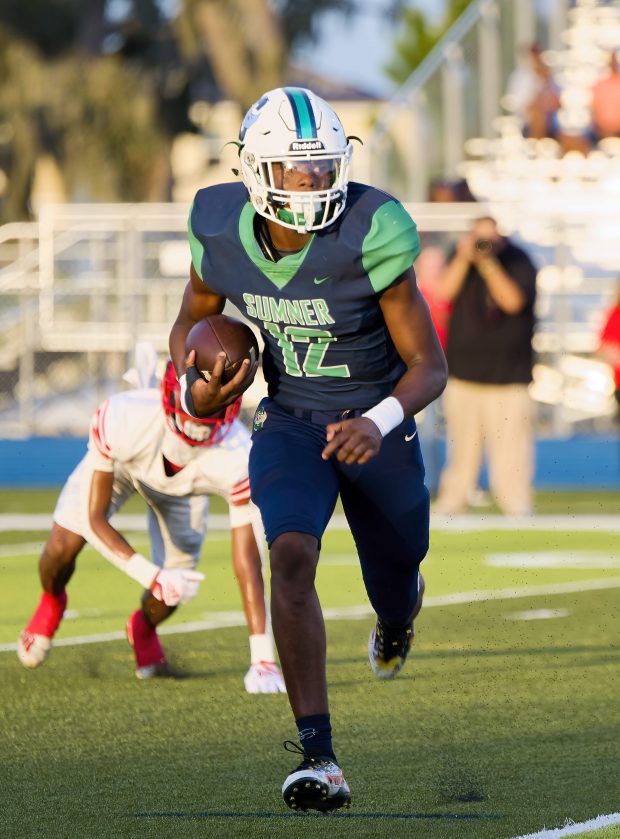 The exhibition game had a strong community interest selling 1,400 tickets, according to one Sumner official, in the week prior to the game and a robust walk-up audience. Both bleachers were filled and plenty of spectators took up standing-room-only positions. It was a playoff atmosphere for what was an exhibition that won’t count in the win/loss column at the end of the season. Sumner held out a number of star players for the game, with Seniors Zach Walker and Keoni Denny in street clothes to start the contest. Sophomore WR Tyler Williams joined the duo taking off the second half. Sumner also unveiled the first mascot in school history prior to the game.
The action on the field got started with Sumner threatening to score first. The Stingrays won the toss and deferred to start the game on defense. They held East Bay and took over and pushed the ball down the field and settled for a field goal attempt that was blocked. The teams exchanged field position for a few series but the Indians were the first to light the scoreboard scoring on a 60-yard pass from QB Nathan Carter to speedster Vincent Ketchup with 6:19 in the second quarter. The Stingrays answered with their own TD on an 11-yard carry by Devin Spencer setup by a 47-yard pass completion by Greg Smith. The half ended with the teams knotted at 7. 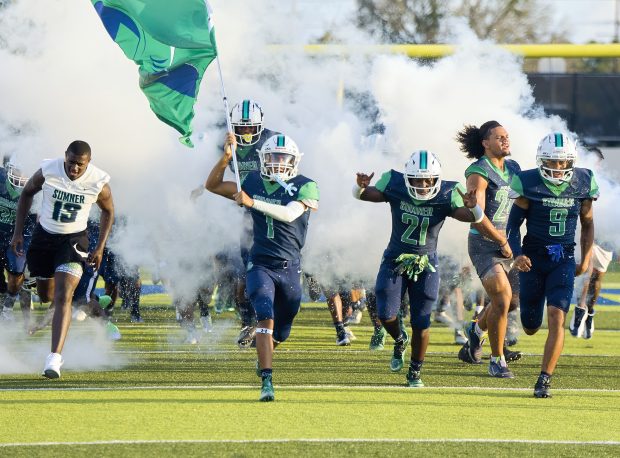 Francis Fedor Photos
Junior Kade Ray leads Sumner onto the field for the first time in the 2022-23 campaign. 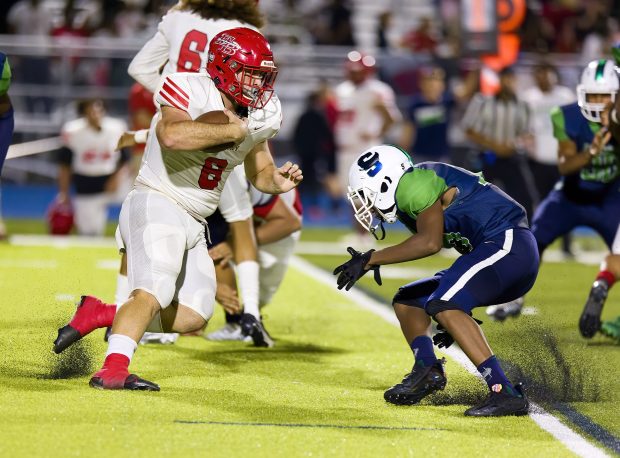 Quarterback Smith took over the game for the Stingrays in the second half breaking two long runs for TDs, the first a run of about 80-yards getting to the outside and breaking contains for the score. On the second, Smith simply outran the competition and scampered to the end-zone. The play ended on a scary note with Greg staying on the ground for a few minutes after the run with medical attention from the trainers. It appears that he, among a number of other players, had issues with cramping on the hot and humid Tampa evening. 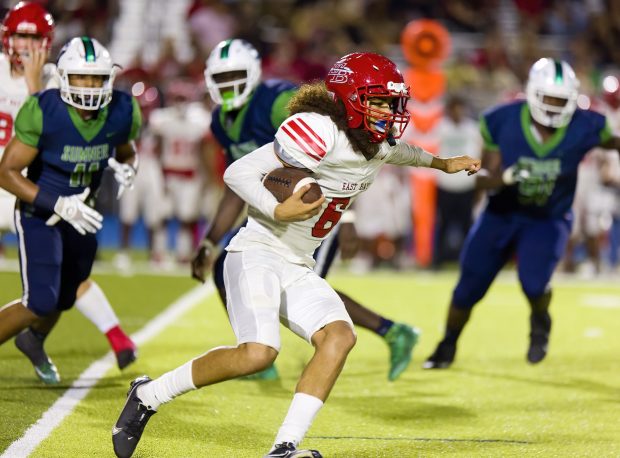 East Bay’s running back, #6, finds some open space against the Sumner defense.

East Bay’s biggest second half scoring threat ended with a Sumner interception at the goal line. The teams would play to a stalemate in the 4th quarter to give Sumner the 20-7 home win to give them momentum heading into the season.
It was a big night on the ground for the Sumner Junior QB Smith, picking up right where he left off in 2021 by generating offense with his legs. Smith finished the night with 157 yards on the ground.
Sumner travels to Bloomingdale to open the regular season on Friday, Aug. 26, and returns home to the Tank on Friday, Sept. 2, at 7:30 p.m. to face Chamberlain.
East Bay will also open on the road at Middleton and face Sickles to open their home portion of the schedule the following Friday.
Football has returned and it looks to be an exciting season for Sumner and their competition in Hillsborough county. Stay tuned!