Riverview resident and Kiwanian stumps for golf and service

Dustie Amatangelo of Riverview remembers why she agreed seven years ago to chair her first golf tournament for the Kiwanis Club of Greater Brandon, which includes today the merger of its Riverview satellite club.
“I just felt that we were not tapping into the entire community to help us support the elementary schools we support through our Terrific Kids program,” Amatangelo said. “The children are our future, no matter how many different ways we want to split that, and if we’re not supporting them, who will?”
Among the elementary schools set to benefit from this year’s Terrific Kids Brandon Kiwanis Golf Tournament are Frost, Gibsonton, Riverview and Stowers. Shotgun start for the Oct. 27 tournament at Buckhorn Springs Golf and Country Club in Valrico is scheduled for 12:30 p.m., with sponsorships starting at $500 and a field of roughly100 golfers set to be filled. The cost of the tournament is $125 per player and includes lunch, dinner and awards for the winners.
Amatangelo’s participation in the annual tournament suits two factors of her personality, both her competitive nature and her heart to give back. Determined and encouraging on both fronts, the long-time Kiwanian said it’s important to participate in nonprofit work, both for the community at large and for feeding your own heart and soul.
As an advertising representative for the now-defunct Sunbelt Newspapers, Amatangelo said it was her publisher, Carla Floyd, who encouraged her to give back through a Kiwanian membership.
“And when I did, I just felt like it was a piece of my family,” Amatangelo said. “My fellow Kiwanians became an added value, as it extended my family to the state of Florida, because everybody in my life lived up north or out west.”
As a single mother, Amatangelo said she was drawn to the youth mission of Kiwanis, which is why she is determined to realize her competitive goal for this year’s golf tournament.
“My ultimate goal has always been to make $30,000,” Amatangelo said, noting that “ninety nine percent of the proceeds raised” will fund programs for kids. The Terrific Kids program at elementary schools help build character, while Kiwanians also support Key Clubs for community service at the high school level, with the largest club now at Riverview High.
“Last year the golf tournament raised $25,000, so this year my goal is to hit $30,000,” Amatangelo said. “This will allow us to increase the amount of scholarships we offer, to sponsor more Terrific Kids and Key Clubs, and I would love to start a Builders Club at the middle school level.”
As for where she goes from there, Amatangelo is certain of two things. She will continue her community service and she will set a new tournament goal of $50,000 once the $30,000 threshold has been met.
“I didn’t expect to be chairing the golf tournament for so long, but I’m good with logistics and I’m a good motivator, so putting something like this together is kind of my strength,” Amatangelo said. “I’m a great cheerleader to get everybody to do just a little bit, because if we all do a little bit, then we all win.”
As for her day job, Amatangelo works for Florida Building Inspection Group in Brandon, which works in 10 counties; by land, from Hernando to Collier, and by water, from Pinellas to Polk. 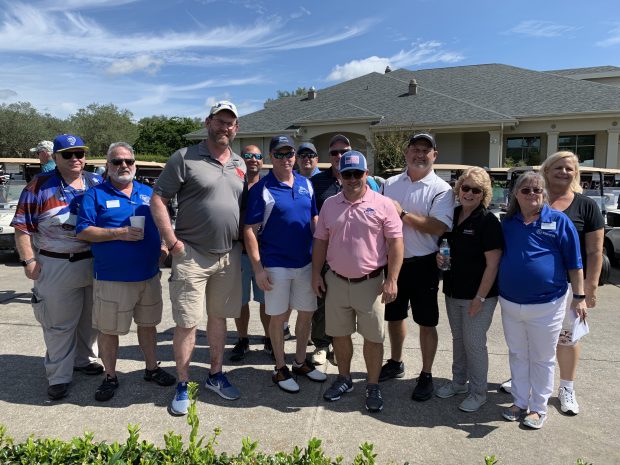 In Florida for 36 years, Amatangelo said she has seen a lot of changes living 26 years in Riverview, not the least of which is the growth of housing and traffic. But that’s the appeal of Riverview, Amatangelo said, that it sits at the crossroads of many major roadways, allowing for easy (if not congested) access north, south, east and west.
“Traffic patterns change, new schools have gone up, and all of this shows that Riverview is a growing community,” Amatangelo said.
Moreover, “if you’re looking for a paycheck for your heart, get involved with a nonprofit,” Amatangelo said. “As a citizen, it’s also kind of your responsibility. Volunteering is a great way to see the inner workings of your community and to give back.”
Amatangelo is nothing if she is not a mobilizer.
“We’d love to see you at Kiwanis, but where your heart lies, that’s where you should go,” Amatangelo said. “Our mission is with children. If your heart is with children, we’re a great organization to hook up with.”
The club meets 8:15 a.m. the first and third Thursday of the month at The Bridges in Riverview. It meets 5 p.m. the second Thursday of the month for a social at the La Septima Cafe in Brandon.
For more on the club and golf tournament particulars, call Amatangelo at 813-294-0645 or visit www.brandonkiwanis.org.