The J.B. Gibson Park in Gibsonton is getting a much-needed spruce-up, with a lighted walking trail, a new playground, outdoor restrooms and water fountains, a redesigned parking lot and, if positive sentiment continues, separate dog parks for both small and large dogs.
The project overall is set to cost $335,000, said Jason Mackenzie, Hillsborough County park planning and development manager. Funding comes from park impact fees collected from developers building in the county’s central zone, which includes Gibsonton, Bloomingdale, Brandon, Progress Village and parts of Riverview.
Park impact fees are collected countywide in four zones, Mackenzie said, noting that “funding increased last summer, which makes us able to add amenities to parks that haven’t been updated for years.”
Count among those parks the 8.8-acre J.B. Gibson Park at 10017 Vaughn St., situated behind Hillsborough County Fire Rescue Station 12, at 8612 Gibsonton Drive. 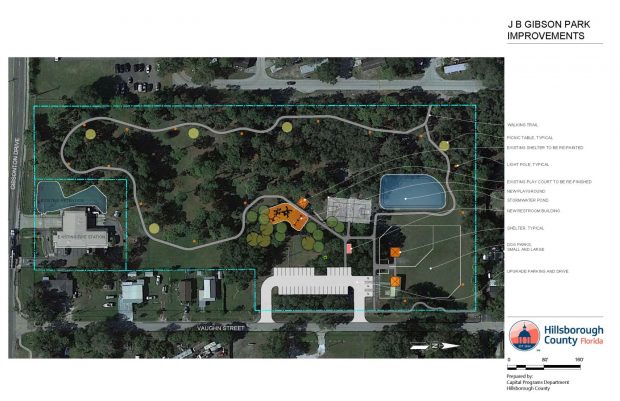 Already, “the walking trail is brand new with new benches,” Mackenzie said of the trail that fills roughly a quarter-mile. “We’re also working with TECO to add lights around the walking trail to brighten up the park at night, to make people feel safe when they’re walking and to give the park a little more ambiance.”
Meanwhile, “the playground was torn out because it was falling apart, and we’re waiting for the new playground to be finished and delivered,” Mackenzie said. “Designed for children ages 2 to 12, the new playground, with swings, slides and climbers, will sit in almost the same location as the previous playground.”
Also set to be demolished, and replaced with outdoor restrooms and drinking fountains, is the “very small recreation center, which is in bad shape and closed,” Mackenzie said. “The parking lot will be replaced once the building is demolished, and we’ll be adding additional parking spaces.”
The park currently has a basketball court and a shelter space near where the new playground will be erected, plus a larger shelter “that’s going to be removed because it’s in bad condition, and we don’t want it to fall down on anybody,” Mackenzie said. “If the dog parks go in, which seems like a positive thing right now, we’ll add two shelters to both dog parks, one for large dogs and one for small dogs.” 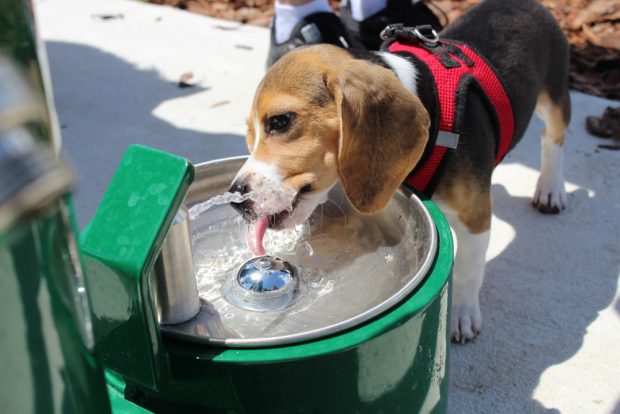 Water fountains for dogs and people are among the J.B. Gibson Park improvements under study and in the works.

Mackenzie said he expects J.B. Gibson Park upgrades and enhancements to be completed in late February, which as of Aug. 1 put the project on a six-month timetable. The timeline is based on the expected resolution of all permitting issues.
Meanwhile, separate play areas for both small and large dogs are in the works, as well as related amenities that have not yet been finalized, pending a review of community sentiment, Mackenzie said. Items found in other parks include dog-waste receptacles, shelters with benches, water fountains for dogs and people, platform climbers (or ramps), hurdles to jump and, “in some cases, concrete tunnels for dogs to crawl through and lie on on hot days,” Mackenze said.
Overall, “we’ve been adding dog parks where there’s been a need, filling voids and gaps countywide,” Mackenzie said. He explained that such is the case in and around J.B. Gibson park, noting that “every time we went to the park to check on things, community members would tell us it would be really great to have a dog park there.”
Eager to hear resident reaction to these and other suggestions, the Hillsborough County Engagement and Education Hub has been collecting online survey comments from July 25 through Aug. 7.
“I love all the improvements to J.B. Gibson Park,” said Rachael Bailey, identifying herself as community manager to the nearby Riverwalk Mobile Home Park. “My residents are loving all the new improvements. I am willing to help in any way I can to keep building up the park.”
“This dog park is the perfect way to get neighbors to meet other neighbors, to play, socialize and help each other with our dogs in a safe, contained setting with the amenities,” said a respondent identified as C. Felice. “I have dogs myself, and my husband and I have been dreaming of a nearby dog part to go to for years that would be safe.”
For a review of the project, survey questions and responses, visit www.publicinput.com/hcengage/.