Home Headlines As Wimauma grows, so does work of the Enterprising Latinas
HeadlinesNews

As Wimauma grows, so does work of the Enterprising Latinas

With the recent expansion of its Wimauma Opportunity Center, the Enterprising Latinas continues to be a major force in moving the community of Wimauma forward.
“Women and low-to-moderate-income families are our focus, but the center is a hub for economic opportunity for anyone in Wimauma and surrounding communities,” said Elizabeth Gutierrez, Enterprising Latinas founder and CEO. “It’s purpose is to create a place for both personal and professional development, workforce skills certification and training, training and assistance for starting or growing micro-enterprises and networking. 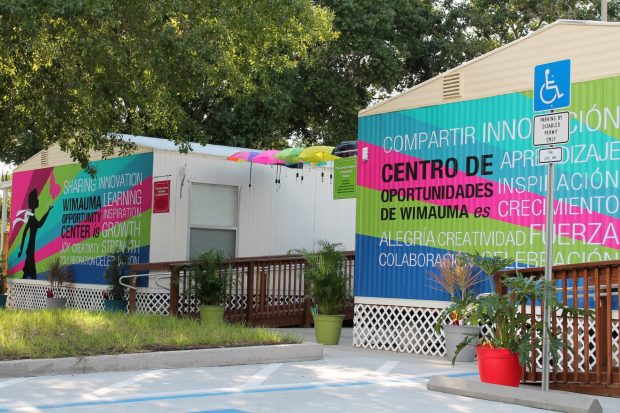 ILLEANA CINTRON PHOTO
The recently completed expansion of the Enterprising Latinas’ Wimauma Opportunity Center included the addition of 1,700 square feet of space in the form of three new modular buildings, one of which will be occupied by HCC SouthShore as a satellite campus.

“We’re a pathway to prosperity,” she said.
Groundbreaking for the expansion project took place in November 2019, and work got under way in 2020, then stalled when COVID-19 hit. Completed in December 2021, the almost $800,000 project included an upgrade to the Enterprising Latinas main building, which included a new roof, new heating and air conditioning system, renovated restrooms, parking accessibility and electrical/plumbing upgrades. It also included the addition of 1,700 square feet of space in the form of three new modular buildings.
HCC SouthShore will occupy one of the modulars as a satellite campus for providing a variety of gateway classes on site. The other two modulars will be used for training, meeting and office space, plus offices for Wimauma Community Development Corp.
Funding for the project came from $386,000 in Hillsborough County Community Block Grants and $400,000 from the Allegheny Franciscan Ministries Common Good Initiative.
The Community Foundation of Tampa Bay awarded $50,000 and United Way Suncoast $262,000 over three years, for additional funding to support programs. Hillsborough Community College’s SouthShore Campus provided $100,000 of in-kind services for construction.
Gutierrez noted funds specifically earmarked for the expansion project in a $200,000 Bank of America Neighborhood Builder Award, which the Enterprising Latinas received in 2019, were also used in the project for staffing and operations.
“This is just the beginning, our first phase,” she said. “Even with this expansion, we cannot fully meet the needs of this growing community. The second phase will include construction of a new 20,000-square-foot building on this same 2.4-acre property.”
The new building will replace the modulars and add more training, event and meeting space.
About the Enterprising Latinas
The Enterprising Latinas was founded in 2009 and began operation in 2014, working from a small space at Beth-El Mission. Four years later, in January 2018, the 501(c) (3) nonprofit organization purchased the old Rachel’s Country Kitchen building built in 1980s at 5128 State Road 674, Wimauma.
The Latinas moved in, as is, and slowly converted the former restaurant into the Wimauma Opportunity Center.
“Our strategy is two-fold,” Gutierrez said. “We focus on the personal and professional development of individual women and also work at a community level. When women do well, children do better and so does the community.
“We found that it’s not enough to work only with individuals,” she said. “It’s also important to improve the environment people live and work in.”
Thus, the Enterprising Latinas work toward transforming the Wimauma community into a place of opportunity for all.
It currently faces significant challenges – public transportation, child care and affordable housing, language and literacy barriers, and a population now reaching 10,000 people.
“Finding work that can generate a living wage is close to impossible for low-to-moderate income families,” Gutierrez said. “The cost of a new home in the area is roughly $300,000.”
In the 2020 census, the median household income was $39,617 compared to around $60,566 for Hillsborough County. The per capita income in Wimauma was a mere $14,460. The percentage of adults without a diploma was 39.1, and only 7.2% of residents 25 and older had a college education. 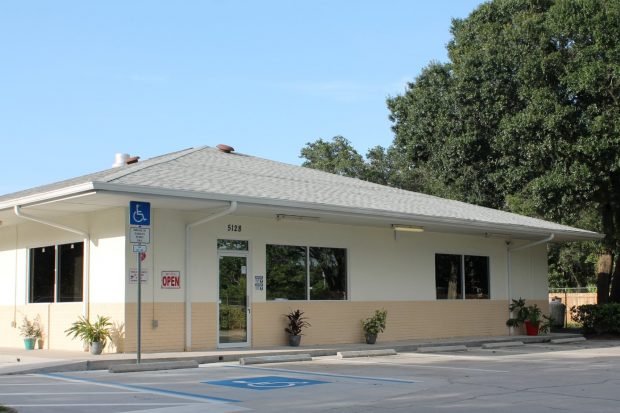 ILLEANA CINTRON PHOTO
The Wimauma Opportunity Center is a hub of economic opportunity for anyone in Wimauma and its surrounding communities. Its services include personal and professional development, workforce skills certification and training, training/assistance for starting or growing micro-enterprises and networking.

“We realized early on Wimauma would be hit with major development, and it would happen fast,” Gutierrez said. “To change conditions in the community, we partnered with the Wimauma Community Development Corporation in calling for a new and updated community plan in 2019 that demanded certain and specific improvements in Wimauma’s downtown areas, where the highest concentration of poverty is.
“The plan sets the foundation [for] an improved quality of life in the community.”
Formally adopted by the Hillsborough County Commission on Oct. 14, 2021, the community plan provides for affordable housing by giving builders an incentive to build and requires any new development in the urban service area to be connected to the existing community.

ILLEANA CINTRON PHOTO
The Wimauma Opportunity Center is a hub of economic opportunity for anyone in Wimauma and its surrounding communities. Its services include personal and professional development, workforce skills certification and training, training/assistance for starting or growing micro-enterprises and networking.

Enterprising Latinas programs serve more than 2,000 people at its Wimauma Opportunity Center annually. The center is open from 9 a.m. to 6 p.m. Monday through Friday. It’s also open weekends and evenings for trainings and events.
For more information, visit http://www.enterprisinglatinas.org/, email info@enterprisinglatinas.org or call 813-699-5811.