The huge plume of steam you may have seen pouring out of the Big Bend Power Plant in Apollo Beach recently is nothing to be alarmed about. In fact, according to Tampa Electric spokeswoman Cherie Jacobs, it’s a sign of progress.
The 100-foot plume is actually water vapor. It’s the result of a pipe-cleaning process that will continue around the clock through the month of July. The cleaning process is needed so Tampa Electric can finalize its years-long Big Bend Modernization project and begin full operations by December.
Noise-abatement equipment will be used as the pipes are cleaned, so nearby residents will not be disturbed by the process, Jacobs said. Once the project is finished, noise levels will be no more than what is typically heard during normal plant operations.
Since local law enforcement officials have been notified, there’s no need to call emergency services.
The modernization project has involved removing old equipment and installing “state-of-the-art combined-cycle technology to eliminate coal as the fuel for Unit 1 and, instead, go to natural gas,” Jacobs said. “Unit 2 was shut down last December, and we will retire Unit 3 in the spring 2023.
“For now, we have no plans to change Unit 4, which operates on either coal or gas,” Jacobs said.
The Big Bend Modernization Project has been a long time in coming.
“We had many regulatory approvals required by the state before we could even begin construction in August 2019,” Jacobs said. “This new, much cleaner technology is highly efficient and its steam generates more electricity. It’s a much cleaner way to [produce] power.” 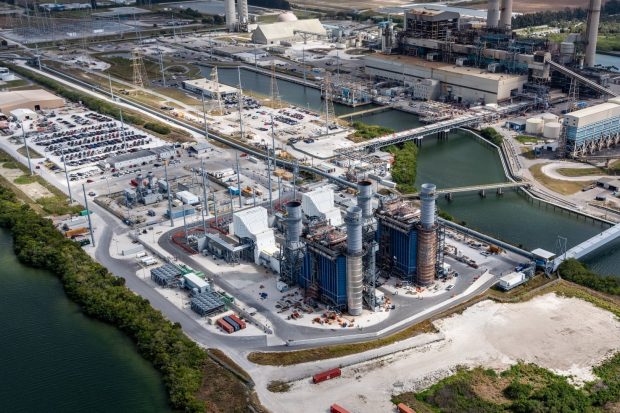 TAMPA ELECTRIC CO. PHOTO
Tampa Electric’s modernization of its Big Bend Power Plant in Apollo Beach will be completed by December. Throughout the month of July, residents may see a round-the-clock,100-foot plume of steam emanate from Unit 1, as the project initiates and finalizes a necessary pipe-cleaning process.

The $850-million project is part of Tampa Electric’s capital improvements.
“When this project is complete, Tampa Electric will use less coal to generate electricity, use less water, produce less wastewater and reduce air emissions,” Jacobs said, in a press release. “The project will save our customers money and, coupled with our significant increase in solar power, make Tampa Electric substantially cleaner and greener than it is today.
“It’s a win for our customers and a win for the environment,” she said.
Jacobs also noted the new technology will continue to produce warm water for the manatees who seasonally visit the plant’s warm water discharge canal.
Tampa Electric, a subsidiary of Nova Scotia-based Emera Inc., is one of Florida’s largest investor-owned electric utilities. It serves about 800,000 customers throughout West Central Florida.