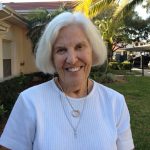 Elinor Schneider Currie was born on May 5, 1933, in Massillon, Ohio, the third surviving child of Orlando and Odessa Schneider. Raised in Canton, Ohio, she graduated from Lincoln High School in 1951 and from Mount Union College in 1955. There she met her husband-to-be, Philip Currie, whom she married in 1956.
After teaching school in Millersburg, Ohio, and Lima, Pa., she welcomed her first-born, David, in 1959. A daughter, Jill, was added to the family in 1962. In 1964, she moved with her family to Latrobe, Pa., where her husband practiced medicine for 30 years as an obstetrician-gynecologist.
In addition to her primary vocation as a homemaker, she served as a volunteer at the Latrobe Area Hospital, particularly through her role as a clown who helped demonstrate basic medical procedures to children to reduce their anxiety. In the mid-1990s, she began spending the winters in Sun City Center, Fla., eventually settling there year-round in 2010 until her death on June 21, 2022.
A life-long lover of the arts, she was active in local drama and musical groups, serving on the board of directors of the Westmoreland Symphony. She continued singing in church choirs until the Sunday before dying unexpectedly in her sleep.
Raised in a believing family, she sought to nurture her own family in faith, becoming a member and eventually a deacon at the Latrobe Presbyterian Church, transferring to the Sun City Center United Methodist Church after moving to Florida. Through her years in Florida, in addition to her ministry through the SCCUMC Chancel Choir, she served for many years as part of the Non-Denominational Christian Worship Service team, leading singing at independent, assisted living and memory care facilities in the area. She also sought to live out her faith in quiet support of a variety of ministries such as My Warrior’s Place and Leadership Transformations, as well as African Enterprise, including participating in an overseas mission trip to Southern Africa.
She is survived by her son, David, and his wife, Susan; their children, Catherine, Roy, and Elspeth; her daughter, Jill, and her husband, David Reeves; and their children, Joy and Gordon. She is also survived by her brother-in-law, Bruce; her sister-in-law, Carol; and extended family on both sides.
A Memorial Service will be held at Sun City Center United Methodist Church (1210 W. Del Webb Blvd., Sun City Center, FL 33573) on Friday, July 1, 2022, at 11 a.m., followed by a reception at the church. In lieu of flowers, donations may be made to My Warrior’s Place: https://www.mywarriorsplace.org/.
Her ashes will be interred next to her husband’s at Unity Cemetery in Unity Township, Pa., later in the year in a private, family service. Arrangements by Sun City Center Funeral Home, 813-634-9900.

Louise Prehn Wagner RN passed to her Heavenly Father on June 20, 2022. Louise was born Dec. 3, 1933, on Staten Island, N.Y., the loving daughter of Albert Prehn and May Irene Brautigam.
She was the ever loving wife to Michael for 54 years; loving sister to George (Janet), Thomas and Joyce (step sister); loving mother to Raymond (Donna, div), Martha (Steven), Irene, Michael (Tiffany), Andrew (Kerry); proud and loving grandmother to Reneé, Stacymay (James), Vincent (Lauren), Jason (family), Lauren, Kevin, Haylie; exceptionally proud and loving great-grandmother to Adriana, Teagan and Fintan (dec); loving aunt to Guy, Tracy, Susan (dec) (Alex), Evelyn (dec) (Ted), Bruce, Jeff (dec), Charlie (Big) (Christina), Charlie (Little), Christopher, Frank and Robert.
Louise was an RN who graduated with the highest scholastic mark from Pilgrim State Hospital for nurses and retired from Huntington Hospital, both on Long Island, N.Y.
Louise was very active in her church, St. Elizabeth, Melville N.Y.; St. Anthony’s, East Northport, N.Y.; and Prince of Peace, Sun City Center, Fla. – can someone please take care of the flowers?
Louise was very active with the Loyal Order of the Moose, where she was a deputy grand regent. A lifetime member of the Port Jefferson, N.Y. chapter, Louise worked hard for the lodge, inviting others to join and taking care of the catering for club events, weddings and parties. Her talent for decorating the room as well as the tables will be missed.
Louise was a founding member of North Shore African Violet Society, where she won numerous awards.
Mom, “could grow a stick.”
Moving on from violets, she started a business with her daughter, Creations by Irene, where she made brides dreams come true.
Louise is also in Guinness Book of World Records for tap dancing in front of Macy’s Herald Square with her daughter and granddaughter. She has touched so many all across the USA and Ireland and will be greatly missed.
Louise always had music playing, old western movies, Miss Fisher Mysteries, Blue Bloods, Hallmark Channel, musicals that we would all watch and sing-a-long to, Law & Order: “That Lenny just cracks me up!”
The family would like to acknowledge and thank the following for taking care of our Louise:
ER at SCC, HCFR SCC, HCFC BALM, ER and ICU staff at St. Joseph’s Hospital, Riverview. Arrangements provided by National Cremation & Burial Society
Interment will be at Calverton National Cemetary, Calverton, N.Y., at a later date
In memory of Louise, she would want you to grow beautiful flowers and be kind to each other.