In the fall of 2020, Valencia Lakes resident Karen Corbin attended a meeting of 100 Women Who Care – South Shore in Apollo Beach. The member-driven organization collects quarterly donations from all of its members and then directly donates the money to a local, charitable organization.
Corbin was so impressed with the group’s impact and the process it used to benefit other nonprofits, she joined immediately.
The following April, she said she took a chance and formed a group in her own community called 100 Who Care – Valencia Lakes. It’s modeled after the South Shore group with a few twists. Corbin, who has a corporate background in organizational development, public speaking and communication, is its facilitator.
100 Who Care – Valencia Lakes is open to both men and women who reside in the community. Out of 25 invitations Corbin sent out last year, she had 24 affirmative respondents.
‘The reception was terrific,” Corbin said. “We currently have 57 members, and we’re still growing. We will not have a cap.”
The group meets for an hour quarterly, usually on the 15th of the month, at the Valencia Lakes Clubhouse.
“People who join this giving circle care about local causes and want to use the power of collective giving to make a difference for local nonprofit organizations that will use funding to impact people in the communities close to home,” Corbin said. “At each quarterly meeting, our members learn about several member-nominated charities, then vote and each donates $100 to the winner, which receives 100% of the total as a pass-through donation.
100 Who Care Valencia Lakes has no board, no bank account, no administrative fees or overhead expenses to cover. The group relies on a small group of volunteers who help to ensure things run smoothly and its generous members who commit to quarterly donations, Corbin said.
Matching funds of 50% of the donation total may also be awarded by the Schulze Family Foundation for up to $5,000 per quarter.
Since its inception, past recipients have received a total of more than $27,000, which include the Enterprising Latinas, Campaign Against Human Trafficking, Beth-El Farmworker Ministry and the Firehouse Cultural Center.
Its most recent recipient was Girls of the World, a life-long mentorship program dedicated to providing life-skills and unique experiences for young girls and women to help them develop a positive self-worth. The award was announced June 15. 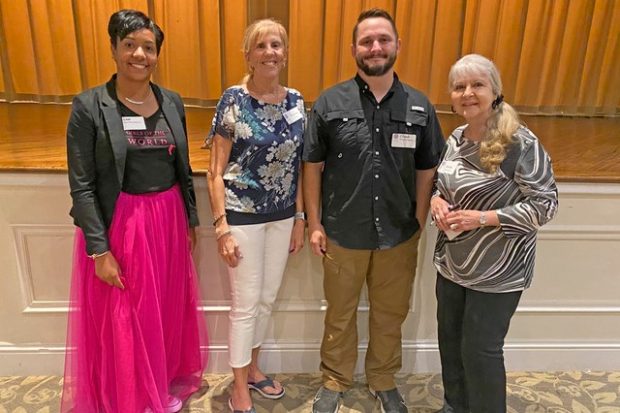 Founder Lea Manningham will receive at least $5,700.
“It was my first presentation, and I was so nervous,” she said. “I was truly overwhelmed to be chosen. I believe so much in our girls and this community; it felt good to know others believe in me and my organization.
“The money will help cover the operational expenses of our new office in Apollo Beach, which now gives our girls access to activities five days a week instead of only one,” Manningham continued. “It will also enable me to take 15 of our 30 girls on a college tour to Warner University and FAMU. I am so grateful.”
Manningham was nominated by Valencia Lakes resident and club member Robyn Payant, president of Payant Wealth Management Group in Sun City Center. She was thrilled Girls of the World won.
Corbin, of course, is seeking new members.
“As we grow, our donations will be that much more, as will the possible match,” she said. “This will enable us to have an even greater impact.”
Folks of Valencia Lakes are invited to learn more about how they can help make a difference for others by emailing kscorbin1@gmail.com or visiting https://bit.ly/3y5oa3g. There’s no contract, simply a commitment.

Candidates and voters qualify and ready for Primary...