In the wake of school safety measures signed into state law this month, and initiatives already in force at Hillsborough schools, Florida legislators failed to push forward a special legislative session on gun violence.
State Democrats, who had pushed for the legislation, were seeking to address universal background checks. They needed the support of 60 percent of the overall members of both the House and Senate to hold a special session, yet only 19 Republican lawmakers responded to the poll required to hold such a session, which had a June 10 deadline. The respondents voted against the special session.
Meanwhile, Florida Gov. Ron DeSantis on June 7 signed into law House Bill 1421, which addresses school safety statewide. The measure builds on legislation approved in 2019, which addressed recommendations for safer schools and improved youth mental health as put forth by the Marjory Stoneman Douglas High School Public Safety Commission.
The commission was established in the aftermath of the Feb. 14, 2018, massacre at Marjory Stoneman Douglas High School in Parkland, Florida, where Nikolas Cruz, a 19-year-old student, opened fire with an AR-15-style rifle and killed 17 people and injured 17 people. The killing became the deadliest high school shooting in the nation, surpassing the Columbine High School massacre that in April 1999 cost 15 lives.
In the wake of this year’s school shooting in Uvalde, Texas, Florida Democrats had hoped to advance a special session on gun violence. In Texas on May 24, using an AR-15-style rifle, 18-year-old Salvador Ramon opened fire inside Robb Elementary School, killing 19 children and two teachers. Ramos also died, in an exchange of gunfire with responding officers.
The bill signed into state law June 7 includes a record $140 million for mental health and $210 million for school safety, including school-hardening grants and youth mental health awareness and safety training.
Back in Hillsborough County, school superintendent Addison Davis addressed school safety measures at the June 7 school board meeting.
“Our hearts go out to Uvalde, Texas, and what happened at Robb Elementary School,” said Davis. Noting the leadership of John Newman, Hillsborough’s chief of security and emergency management, Davis continued, “But I want to ensure everyone in Hillsborough County and this district that our team works hard every single day to make certain that safety is our greatest priority.”
“Are there opportunities to improve? Absolutely,” Davis said. “This is why we needed to do active professional development, active drills to stay in front of our teachers and our leaders and our support staff and our team, so that we can continue to get it right.”
Reviewing the elements of Hillsborough school safety initiatives, Davis noted as well the installation of perimeter fencing and additional surveillance cameras; impact-resistance window-tinting around facility entrances; access control on every campus, including single-point of entry during operational hours; and the purchase of Centegix, which allows for school-based employees to quickly report an emergency to law enforcement, fire rescue, school district security and school district staff representatives.
Moreover, Davis noted the hiring and placement of “armed assets at every school,” which involves school guardian officers at elementary schools and the use of school-based Tampa police officers and Hillsborough County sheriff’s deputies.
“We have someone who is actively roaming on campus,” Davis said, “not only to enforce the law, but to be a table coach and a mentor and to build great relationships with our students.” 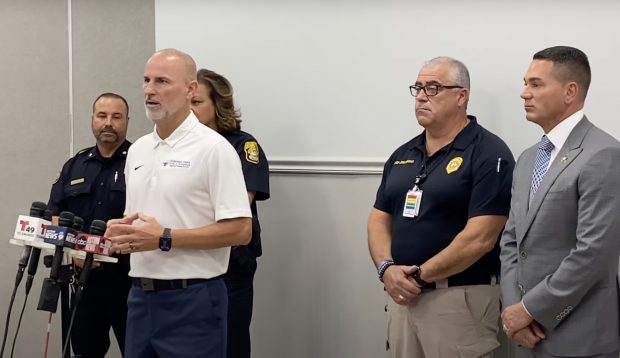 Addison Davis, superintendent of Hillsborough schools, speaks at the May 25 press conference, as Hillsborough County Sheriff Chad Chronister, right, looks on. Next to him is John Newman, the school district’s chief of security and emergency management.

At a press conference May 25, the day after the Uvalde shooting, school district and law enforcement leaders addressed the added safety measures in place for the remainder of the 2021-22 school year. The school year ended May 27.
“It’s a tough day to get up and go to work if you’re a teacher,” Newman reportedly said at the press conference. “It’s a tough day for a parent to get up and drop their kids off.”
In reviewing school safety measures, “We drill every month, we have ramped up our mental health teams,” Newman said. “The teachers and principals are rock stars. When they started this career, they never signed up to worry about an active assailant.”
As for HB 1421, signed into law June 7, it extends the sunset of the Marjory Stoneman Douglas High School Public Safety Commission; authorizes the state commissioner of education to enforce, rather than just oversee, school safety and security compliance; authorizes safe school officers to complete crisis intervention and training to improve knowledge and skills for response and to de-escalate incidents on school premises; requires law enforcement officers to be present and involved in active assailant emergency drills; and requires school boards to adopt family reunification plans in the event of an evacuation. Moreover, the bill requires school district officials to annually certify that at least 80 percent of school personnel have received mandatory youth mental health awareness training.

‘Riverview pillars’ set to be honored with roundabout statue for G.W. and Lillian Symmes