Last Christmas, Dave Lyons bought some remote-controlled cars for his grandkids in Ohio. The 3- and 5-year-old youngsters loved running them so much, he bought one for himself to participate with them.
“I got hooked,” Lyons said, noting his church, Friendship Baptist in Sun City Center, has seven acres of property and plenty of room behind the building. “So Brad Wells [a fellow member] and I decided to create a dirt track there in January.
“It’s an oval, dirt-road course between 600 and 700 feet long, with corners built in so people have to actually learn to drive their cars,” he said. “Some of our vehicles are capable of speeds of 60 mph [most average 25 to 30 mph], but the track has been built to keep speeds slower and relies more on the vehicle handling than speed. We have plenty of crashes, but it’s lots of fun.”
Lyons and Wells called their project Just 4 Fun RC Racing and began inviting others to participate.
Thus far up to 17 have shown up at 1 p.m. on a Saturday afternoon when the fun begins, and they usually stay for a couple of hours. Some folks come to drive cars; others like to watch, Lyons said.
Since he bought that first remote-controlled car, Lyons has purchased seven more. He loans some of them to folks who turn out, so they can see if they like the family-oriented hobby.
The miniature model vehicles that zoom around the track are controlled from a distance using a specialized transmitter or remote. They can be purchased on Facebook Marketplace, Amazon and eBay, HobbyTown in Brandon or from manufacturers like Traxxas. 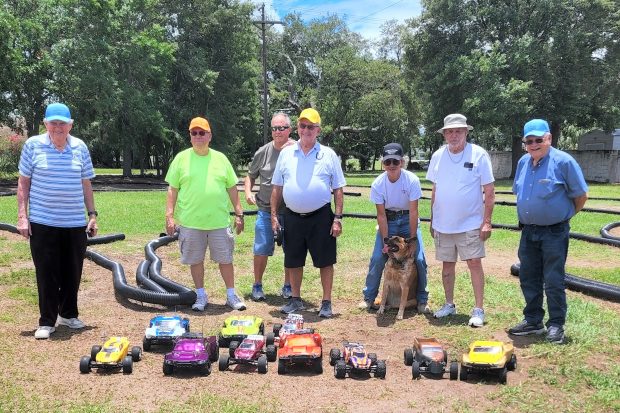 COURTESY PHOTO
Brad Wells, left, and Dave Lyons, third from left with his dog, Buckeye, gather with other Just 4 Fun RC Racing participants after running their remote-controlled cars around the dirt track at Friendship Baptist Church in Sun City Center. The public is welcome to join the fun.

“We generally have seven to 10 vehicles running every Saturday for some fun racing and fellowship,” he said. “This isn’t serious racing; it’s a time to meet new people and chance to run some 1/10th-scale, remote-control cars/trucks or buggies. There’s no cost involved. It’s noncompetitive and it’s free.
“We ask people to bring a chair and some water to hydrate,” Lyons continued. “Even though we’re right beside a lake, it can get pretty hot. And if it looks like rain, we cancel.”
Just 4 Fun RC Racing is an outreach of Friendship Baptist Church, but no one is there to solicit membership.
“It’s all about fellowship; cars come in second,” he said. “Everyone is welcome, including children.”
So if you’re looking for something fun to do that provides an opportunity for you to make new friends and socialize, simply show up Saturday afternoons at Friendship Baptist Church, 1511 El Rancho Drive, Sun City Center. The parking lot is directly behind the church.
Bring along your kids or grandkids. They’ll have a ball.
For more information, contact Dave Lyons at 740-260-6711.