Take Me Out to the Ballgame Valencia Lakes Style

On Thursday, May 26, a group from Valencia Lakes (VL) made its way out to a game at the Tampa Bay Rays home, Tropicana Field (aka “The Trop”). The Rays welcomed the Yankees to town for a four-game series. (The teams split the series 2-2.) The Yankees, whose spring training home is George M. Steinbrenner Field in Tampa, have a large following in the area, and many of the residents of the Valencia Lakes communities have a rivalry with fellow residents who hold other baseball loyalties, including those of the Tampa Bay Rays. It feels like the largest contingent of folks moving to Florida are moving out of NY or NYC (or hold homes in both states (aka “snowbirds”). A recent study, released last week, shows that based on IRS data, the past two years have seen Florida gain $6.4 billion economically and 72K in population from New York State. So it was a perfect time for the groups to head out to the ballpark to cheer on their respective teams. As new residents of FLA ourselves, holding Philadelphia alliances (and traveling to Clearwater ritually to attend March spring training games since 2003), we understand the attraction of Florida. 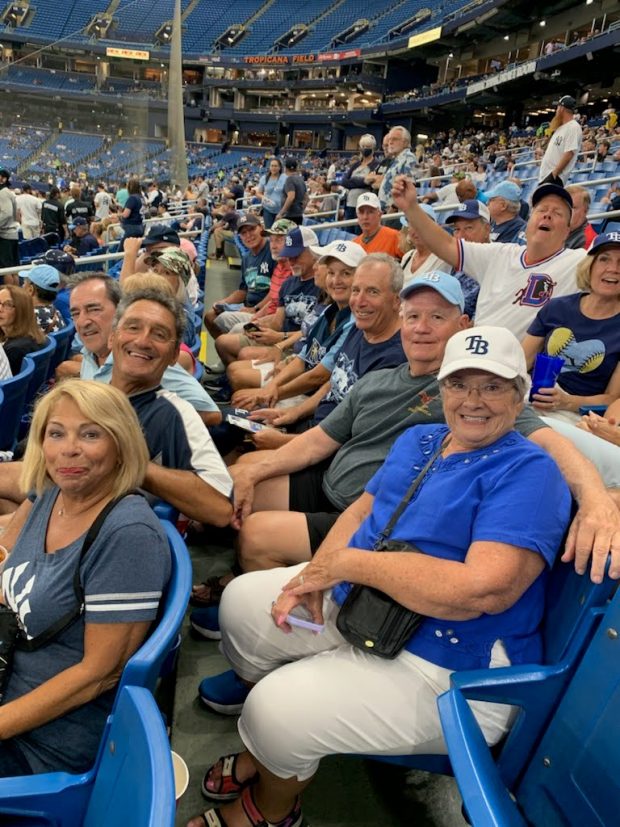 The outing started as an effort undertaken by VL part-time resident Bill G., who is a member of VL’s softball club and serves informally as the organizer for club outings that give the players options outside of softball to enjoy. This same trip had been planned for the 2020 season, but the virus eliminated the opportunity, and there wasn’t a follow-up for 2021 as the community was still feeling out large group outings. The time had come and Bill started to mastermind the effort during a trip out to the ballpark for opening day. He followed up by contacting the group ticket office for the Rays about a month ahead of the planned outing. The Rays offered up a block of 60 discounted tickets that were easily allocated as the demand was strong to attend as a group. The softball club provided a bus for the event to offer an alternative to driving. Demand for the bus was so strong, a larger bus had to be requested and was provided to handle the overwhelming interest. The Rays sweetened the offer by providing hats to each attendee in the group and, as they do with many groups that attend through their group ticket office, the group got to see their name up in lights on the scoreboard (or auxiliary ribbon boards).
The game…. Ah, yes, the game. Well, it was a good night for the Yankee fans and not a great night for those with Rays alliances. The game remained scoreless through five innings, an old fashioned pitchers duel. Nestor Cortes took the mound for the Yankees; he’s having a strong season with a 1.70 ERA and 60 strikeouts to build a 4-1 record. The Rays countered with Ryan Yarbrough who took the loss and is now 0-1 on the season in four starts. The Yankees got to Yarbrough in the top of the sixth, lighting the scoreboard for three runs. They would add another run in the seventh and three more in the ninth. The Rays fans had very little to cheer about until Tampa cracked the scoreboard for two in the bottom of the ninth to stage a rally that came up well short.
The group boarded the bus for a trip back home, and no doubt the Yankee contingent boasted about its win. The teams would split the series and at the end of the weekend, neither group had more to boast about than the other as the weekend came to a close as a draw. The teams will face each other again in late June at the Trop where the rivalry will be renewed and fans of both teams will have a chance to chatter to each other about who’s better than who. As of this writing, Tampa is seven games behind the Yankees in the standings, but the team could make up some ground before the Yankees return to Tampa and add additional intrigue to the match-up.

Summer learning kicks up in Hillsborough with federal pandemic funding