Home Headlines Success can be found at any age
HeadlinesNews

Success can be found at any age

In the fall of 2018, Sun City Center resident Kim Droege, secretary of the Wisconsin Club, was interviewed by Dana Schroeder for Sun Radio during Hi Neighbor.
Vern Hendricks, the station’s programming director, was recording engineer for the interview.
Impressed by her voice, overall demeanor and ability to speak off the cuff, Hendricks asked Droege, “Have you ever thought of being on the radio?
Droege, who has a natural interest in people and about how things work, said she actually had thought about it and felt the timing might be right. Shortly after, when Frank Reid came on board at the station to launch his Drive Time show, he asked her to partner with him. The live program hit the air in February 2019 on Wednesdays from 4 to 6 p.m.
At the time, Droege, a widow, was still trying to sell a property in Wisconsin and had to head back north to take care of things.
The process took a couple of months, and Reid decided to put his own wife in Droege’s chair. When she returned in mid-July to Sun City Center, she no longer had a role on his program. 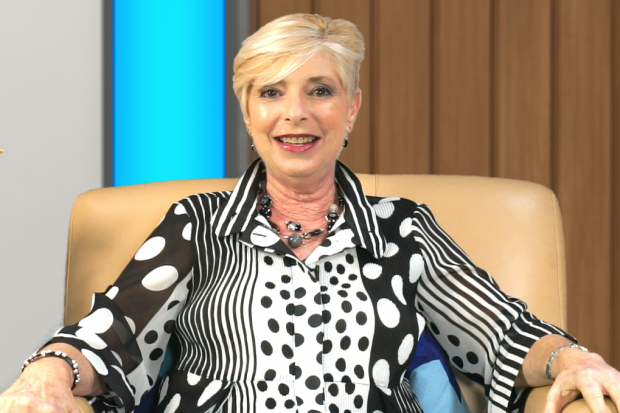 Hendricks told her he’d figure something out. He and station owner Peter Swartz wanted to revive a previous show, which involved interviewing community leaders.
Droege liked the idea but thought it needed a new identity. So she pitched Connecting with Kim, and they went for it, she said.
Hendricks and Droege began recording that August and by the show’s September launch date had two months of interviews ready to go.
“If I met somebody with an interesting story to tell, I invited them on,” Droege said. “The only restrictions were I couldn’t feature businesses not advertising with Sun Radio and politicians could be interviewed but not campaign.”
Connecting with Kim hit the air running Sept. 30 at 3:30 p.m. Mondays, Wednesdays and Fridays.
Droege has interviewed folks from all walks of life since. They’ve included anybody and everybody from county officials, politicians, unions and the media to representatives of nonprofit organizations, arts and civic groups, military associations and more. 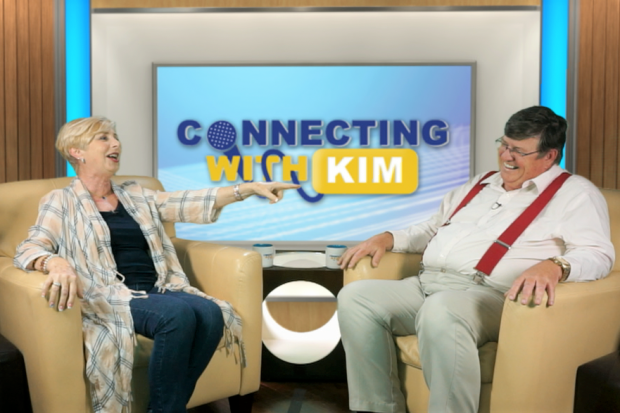 Kim Droege is seen here sharing a lighthearted moment with Patrick Montiega, publisher of the “La Gaceta” newspaper during a recent taped interview on “Connecting with Kim” on TBAE.

Then, in May 2020, Droege was asked to fulfill a Tampa Bay Tiger Club board position, which she could finish and run for on her own at year’s end. She had been a member of the nonpartisan professional organization since 2019.
Something new was about to happen.
The Tampa Bay Arts & Education Network (TBAE) films all of the club’s meetings and Lifetime Achievement awards. Unbeknownst to Droege, a longtime friend of hers started talking with TBAE team about bringing her radio show to the cable TV network.
By the fall, Glenda and Scott Maiden, the network’s director of programming/production and CEO, respectively, discussed doing so at a Tampa Bay Tiger Club luncheon.
“You never know where support will come from and a door will open,” Droege said. “I was flabbergasted. I was actually speechless.”
In December, the Maidens and Droege met for three hours to work out an agreement, including the accommodation that all shows would be taped so Connecting with Kim could be rebroadcast on Sun Radio.
Once funding for the show was lined up and production details were set, taping began April 6 for a May 31 launch date. The taped interviews are seen on TBAE (Spectrum 636 and FIOS Frontier 34) Tuesdays and Thursdays at 10 a.m. and 8 p.m. Audio from the show is aired on WSCQ 96.3 FM Mondays, Wednesdays and Fridays at 3:30 p.m.
The videos can also be viewed on demand at https://watch.tbae.net and also on Connecting with Kim YouTube channel.
“I am proof that as you go through every decade of your life, opportunities can present themselves,” said Droege, 66. “It just goes to show, it’s never too late. You can be successful at any age.”
A bit about Droege
Born and raised in Indianapolis, Droege earned a degree in economics from Northwestern University and had a career in marketing with IBM.
She has traveled the world and lived internationally, speaks five languages and was married 41 years to Art Droege, who passed away in 2016.
An avid golfer, she also enjoys yoga, making jewelry, choral singing, reading, gardening and sports of all kinds.