Home News Pete Blair, a man with a heart for volunteering
News

Pete Blair, a man with a heart for volunteering

Longtime Sun City Center resident Pete Blair started volunteering soon after he turned 21. He became an institutional representative for the Boy Scouts of America in his hometown, Nicholasville, Kentucky.
Over the 19 years he was associated as a scouter, Blair served as an asst. scoutmaster, scoutmaster, cubmaster and Cub Scout community chairman in various communities, either in Kentucky or New York, where he moved in 1961, after having become employed with IBM as a customer engineer. Prior to that he had been employed for three years as a peanut butter taster/analyst in a Jiff plant.

Throughout his 30-year career with IBM, Blair continued serving others.
He and his wife, Margie, volunteered at the Wake Medical Center in Raleigh, N.C., on Sunday mornings, helping folks register and taking them to their rooms. He was also a volunteer American Red Cross CPR instructor for 18 months during the early days of the emergency procedure.
He and Margie travelled seasonally from Raleigh to Sun City Center from 2001 to 2005, then bought a home and moved to the community full time.
The self-employed training consultant continued working and currently has 30 different clients, mostly in the pharmaceutical industry. True to form, he has also continued volunteering.
After suffering a stroke and recovering from it in 2005, Blair joined the Sun City Center Security Patrol in 2006 and drove one of its vehicles for several years. At the same time, he volunteered for the Sun City Center Emergency Squad, where he started as a first responder [now known as an emergency medical responder], and then became a driver, emergency medical technician and, finally, a dispatcher. He retired from the squad after his final shift last Dec. 31.
“Pete has a big heart and wants to help everyone,” said Robin Watt, asst. chief of public relations and EMT. “In 15 years at the squad, he served primarily on the ambulance but also contributed his technical skills to our original EMSTARS committee, which moved patient care reports from paper reports to computer reporting. He truly lives his values, giving his time to our local nonprofit organizations to assist them in recruiting help.”
In association with St. Andrew Presbyterian Church, he and Margie served with a group at Beth-El food Pantry once a month for three or four years.
A couple of years ago, after meeting a Seniors in Service staff member at the local chamber’s spring business expo, Blair became interested in a part-time position as a volunteer recruiter for the nonprofit organization. He’s been invaluable ever since.
“Pete Blair has such a heart for volunteering,” said Robin Ingles, Seniors in Service CEO. “Since he entered our orbit in 2019, he has created volunteer training materials, created and managed our www.suncitycenterconnects.org website as a one-stop shop for volunteer opportunities in southern Hillsborough County, coordinated with over 30 local nonprofits to find them more volunteers, implemented a social media strategy that practically guaranteed volunteer interest, represented us at local outreach events and helped us in a hundred other ways. 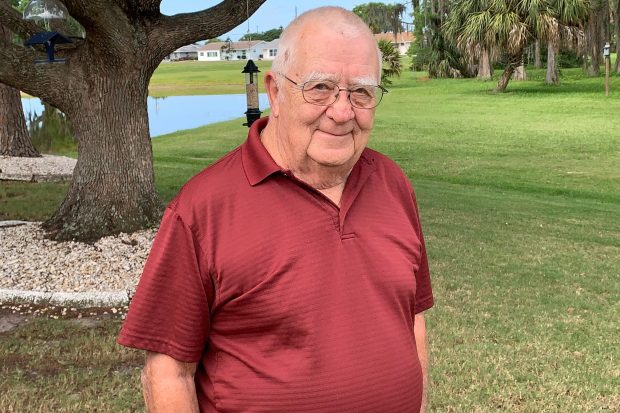 Pete Blair began volunteering soon after he turned 21. Now 86, he’s still at it.

“When a homebound widow reached out to us that she had no way to get her groceries, Pete went on the hunt for a volunteer to help her and ended up volunteering himself,” she continued. “He’s an asset to Sun City Center, and I consider him a friend, mentor and an inspiration.”
Sun City resident Debbie Caneen, president of the South Shore Coalition for Mental Health & Aging, agrees.
“I first met Pete a couple of years ago, when we were starting in the beginning stages of the Sun City Center Wraparound Program,” she said. “He just showed up to learn about it because he wanted to serve the community.
“If there’s ever a need, Pete’s there with a more-than-willing heart,” she added. “I consider him the glue that holds this community together. He has such a generous spirit and a true heart for helping others.”
Blair started off volunteering, he said, because he realized something needed to be done, and he had the knowledge and skills to help make it happen.
“Later, when I joined the emergency squad, I saw it as a new challenge,” he said. “I always enjoyed helping others.
“One of the chief things that happens when you retire is you miss the feeling of importance you had in the workforce. Volunteering re-establishes a feeling of self-worth, and in the [long] run is directly tied to preventing depression and maintaining good health.”